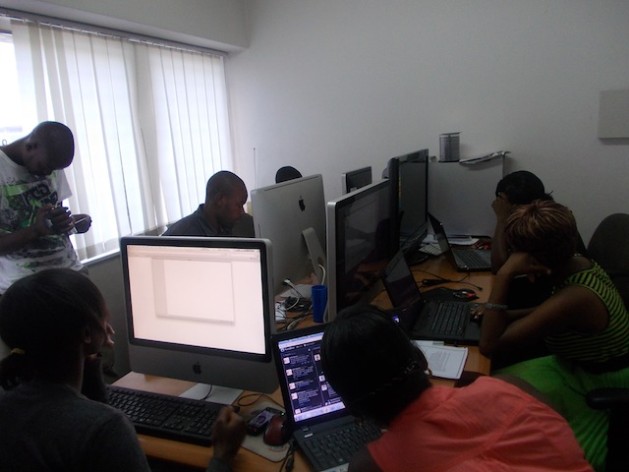 Journalists at the Media Center - Zimbabwe in Harare, a non-governmental facility for journalists, fear intimidation ahead of the country’s elections. Credit: Jeffrey Moyo/IPS

HARARE, Apr 17 2013 (IPS) - As Zimbabwe heads to the polls later this year, media analysts and journalists are concerned about increasing crackdowns on both the judiciary and the media.

This comes as stalwarts from President Robert Mugabe’s ruling Zimbabwe African National Union-Patriotic Front (Zanu-PF) remain defiant about implementing the media reforms outlined in the Global Political Agreement (GPA). The GPA is a 2008 pact between Zanu-PF and the Movement for Democratic Change that paved the way for the current unity government and the elections later this year.

“Forget about security sector reforms, forget about media reforms. What we are going to have are elections soon after Jun. 29 this year when the term of parliament expires. Zimbabweans should brace for the polls,” Goodson Nguni, a well-known Zanu-PF leader, told IPS.

According to the GPA, for Zimbabwe to hold credible, free and fair elections in 2013, it needs to implement media and security sector reforms. It is also required to revamp the Zimbabwe Electoral Commission, which is suspected to be staffed with state security operatives.

The country also needs to amend repressive laws like the Access to Information and Protection of Privacy Act, which stipulates that journalists should be registered annually with the Zimbabwe Media and Information Commission, and the Public Order and Security Act, which criminalises reporting falsehoods and leaves journalists open to litigation.

According to U.S.-based global watchdog Human Rights Watch, both laws have been used by Zanu-PF to “to harass political opponents and rights activists” and to prevent criticism by the media and public debate.

Nguni’s remarks have left many journalists in this Southern African nation bracing for a difficult road ahead as they come at a time when High Court Justice Charles Hungwe faces persecution from the government over recent court rulings.

Hungwe has allegedly been targeted by Zanu-PF for his decisions to grant the Zimbabwe Anti-Corruption Commission leave to institute investigations against ruling party politicians implicated in corruption, and for granting bail to prominent human rights lawyer Beatrice Mtetwa.

She is accused of obstructing the course of justice after she requested that police produce a search warrant when they raided Prime Minister Morgan Tsvangirai’s offices in March.

Hungwe was reportedly summoned to appear before Chief Justice Godfrey Chidyausiku for misconduct, a move that the Law Society of Zimbabwe called the deliberate targeting of the judge.

“What Nguni said, added to the recent arrests of civil society leaders and human rights lawyers like Beatrice Mtetwa, sends shivers down our spines. It means that worse is coming for us as the elections loom, especially in the face of unimplemented media reforms four years after the formation of the unity government,” Evans Muranganwa, a freelance journalist, told IPS.

Political analyst Rejoice Ngwenya said that if media reforms were not implemented, journalists would be headed for a confrontation with the country’s national security officers.

“Right now journalists are vulnerable and the law may be used against them during elections and the already-jittery security sectors see themselves brandishing an open (invitation) to intimidate journalists.

“Media reforms have to be enforced as part of the GPA, but Zanu-PF still resists this, although the new constitution makes it clear that they should be implemented before the elections,” Ngwenya told IPS.

The Daily News, NewsDay and Zimbabwe Independent, which are privately-owned newspapers, are being sued for millions of dollars by top politicians for various investigative pieces they published. It is a move that analysts say is aimed at incapacitating independent newspapers ahead of the elections.

Ernst Mudzengi, director for Media Center – Zimbabwe, said it has become a tradition for journalists in Zimbabwe to face intimidation around election time.

“We have always had the intimidation of journalists. There is no enabling environment for journalists to carry out their duties during the elections, contrary to the country’s GPA,” Mudzengi told IPS.

But Bright Matonga, a media analyst for the state Zimbabwe Broadcasting Corporation and Zanu-PF parliamentarian for the Mhondoro-Ngezi constituency, told IPS that contrary to claims by most independent journalists that the media climate was repressive, this was not the case.

“The media environment has always been conducive, although some journalists have been irresponsible in their reportages, blatantly distorting stories, blending them with truths and half-truths. But it is now up to them to abide by the law as the elections approach,” Matonga told IPS.

However, journalists who operate from the Media Center – Zimbabwe in Harare, said they were suspicious of strangers.

“We are certainly (living) in fear because there are strangers who we suspect are state spies who were sent to man our operations,” Vimbai Kamoyo, an independent journalist, told IPS.

The Zimbabwe Union of Journalists (ZUJ) has taken the reports of journalists being intimidated seriously.

“The level of fear among our journalists as the country gears up for the elections is certainly not an exaggeration. But as a union we have mechanisms to act as a safety net for journalists who may fall prey to intimidation. We are part of a campaign to demand the safety and protection of our journalists from African governments,” ZUJ secretary general, Foster Dongozi, told IPS.

He also said owing to Zimbabwe’s traditionally volatile environment during elections, ZUJ has placed a team of lawyers on standby to defend journalists who may be arrested.

“Around the time of the elections, we will have a rapid legal reaction force on standby to defend journalists who may fall prey to arrest,” he said.

Freelance journalists like 28-year-old Thomas Madhuku, who was arrested by police in 2012 after they accused him of tampering with the voters’ roll, said Hungwe’s persecution signalled increased intimidation ahead of the elections. Charges against Madhuku were dropped because of a lack of evidence.

“If interpreters of the law like Hungwe are being persecuted for executing their duties, what is going to be the fate of ordinary journalists like us who happen to be the fourth arm of the state? Certainly, it’s not going to be an easy road for journalists ahead of the polls,” Madhuku told IPS.