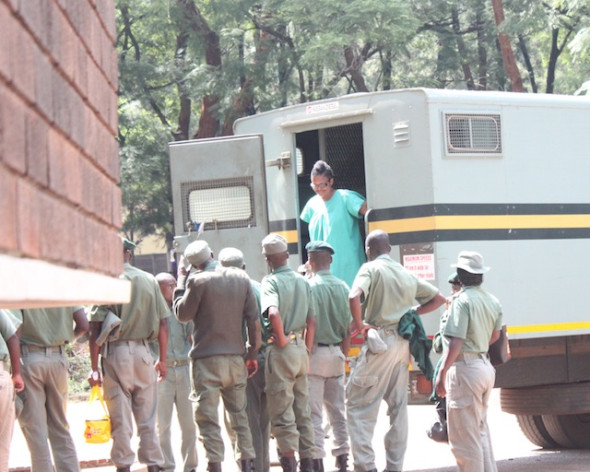 Prominent Zimbabwean human rights lawyer Beatrice Mtetwa was arrested for allegedly obstructing the course of justice. She is pictured here exiting a police vehicle as she arrived at the Harare Magistrate’s Court on Mar. 20. Credit: Nyarai Mudimu/IPS

HARARE, Mar 21 2013 (IPS) - Heightened political tension between the major rivals in Zimbabwe’s coalition government and increased clampdowns on civil society have left questions about the country’s readiness for a true democracy just days after people voted to adopt a new constitution.

Just over three million Zimbabweans voted on Sunday Mar. 17 in support of the draft constitution, which paves the way for elections later this year, while 179,489 rejected it. There were 56,627 spoilt ballots.

However, on the day after the referendum, prominent local human rights lawyer Beatrice Mtetwa was arrested for allegedly obstructing the course of justice. She is said to have requested that police show her a search warrant when they raided Prime Minister Morgan Tsvangirai’s support staff offices on Sunday Mar. 17. Four staffers were also arrested.

“The government clampdown on individuals and organisations that support democracy… clearly demonstrate that there are forces that are not yet ready to welcome the democratic dispensation that will come with the new constitution,” Nixon Nyikadzino, a human rights activist with the Crisis in Zimbabwe Coalition, a grouping of more than 350 civil organisations in Zimbabwe working together to bring about democratic change, told IPS.

President Robert Mugabe’s ruling Zimbabwe African National Union-Patriotic Front (Zanu-PF), and the opposition Movement for Democratic Change led by Tsvangirai (MDC-T), entered a Global Political Agreement (GPA) for a power-sharing government in 2008 after political violence marred the election. Mugabe has been in power for the last 33 years and his time in office have been plagued by allegations of corruption, abuse of power, political intimidation and human rights abuses.

The draft constitution that Zimbabweans just voted for limits the president to only two five-year terms of office, but it also has clear provisions that require security forces to be politically neutral and not to interfere with electoral processes.

Mtetwa and her co-accused are facing charges of impersonating the police, possessing articles for criminal use, breaching the Official Secrets Act and obstructing the course of justice. The act is vague and says that any matter that the state may allege to be “prejudicial to the safety and interests of Zimbabwe” breaches it, but it does not define what “interests” mean.

They are also accused of unlawfully compiling dockets about government officials, including members of Zanu-PF, who are thought to be corrupt.

On Wednesday Mar. 20, Mtetwa and her co-accused were denied bail in the Harare Magistrate’s Court. This is despite a Mar. 18 Zimbabwe High Court ruling that ordered police to release Mtetwa. Police defied the order and she was held in custody and appeared this week in the magistrate’s court.

The move has been condemned by activists here.

“We do not know how a junior court has nullified a senior court’s order. The High Court ordered that she be released but police defied that. Now a junior court has just defied the order again. How the court arrived at that decision is still a surprise to us. We are still studying the decision,” the Zimbabwe Lawyers for Human Rights spokesman Kumbirai Mafunda told IPS.

Nyikadzino said he was not surprised by the court’s decision to deny bail to the five.

“That is their style: to keep you under their custody for as long as they can, because they know they don’t have a case. I know of cases where the police have had to resort to evoking section 121 of the Criminal Law (Codification and Reform) Act, which allows them to hold suspects for longer periods before they appear in court,” he said. In January  international rights organisation Human Rights Watch said the justice system still remained “extremely partisan” towards Zanu-PF.

Nyikadzino added that the tension between Zanu-PF and MDC-T suggested that the coalition government was not ready to embrace democracy.

However, police have insisted that the arrests are legitimate. National police spokesperson assistant commissioner Charity Charamba told IPS that Mtetwa’s co-accused were not staffers in the prime minister’s office.

“These four people are not civil servants. You have to be a civil servant to be deemed a staffer in the prime minister’s office. The people work for a non-governmental organisation, the Institute of Democratic Alliance in Zimbabwe. They had no right to pretend to work in the PM’s office,” she said.

But HRW criticised the government in a Mar. 19 statement, and listed a number of “politically motivated abuses against civil society activists and organisations.”

Zanu-PF spokesman Rugare Gumbo scoffed at and dismissed the accusations of a clampdown on civil society.

“We know this sensationalism is a ploy by (Prime Minister) Tsvangirai and his handlers to push for a SADC (Southern African Development Community) summit before we hold our general elections. Let the police and the courts do their work. We have become more aware of their (MDC-T) machinations,” Gumbo told IPS.

Tsvangirai warned his supporters to expect more violence from Zanu-PF.

“History has recorded that when change is about to happen, there are certain elements who are bent on diverting it. In 2000 we rejected the draft constitution, and a few weeks later, there were land invasions and widespread violence. In 2008 when we signed the GPA how many people were arrested?” he said at a press conference in Harare on Tuesday Mar. 19.

Meanwhile, Mugabe, who is currently in Rome for Pope Francis’ inauguration, is reported to have said that the draft constitution will now be gazetted for 30 days and then tabled in parliament for debate. It will not be amended.