HARARE, Oct 10 2011 (IPS) - Zimbabwe’s justice minister is frantically trying to fend off probes into allegations of human rights abuses perpetrated by President Robert Mugabe’s regime since the country’s independence in 1980. 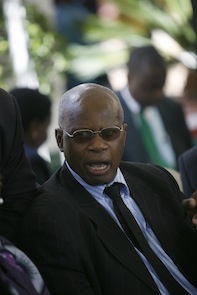 Justice and Legal Affairs Minister Patrick Chinamasa, a member of the highest decision-making body of the ruling ZANU-PF party, the Politburo, is reportedly trying to weaken the Zimbabwe Human Rights Commission (ZHRC) so that it would not be able to investigate decades of governing party abuses.

The commission was established in March 2010 but has been dormant due to the absence of an enabling act that clearly spells out its scope of work. In late 2010, Chinamasa introduced a bill that seeks to operationalise the commission, which is currently being debated in the lower house. If approved, it will be submitted to the Senate, but will require Mugabe to sign it into law.

The bill has attracted criticism from human rights organisations and civil society locally and internationally. Critics say it has many gaps that need to be addressed in order to give birth to an effective human rights commission in this Southern African nation.

These gaps relate to the functions of the commission, whom it reports to, its powers to ensure that human rights abuse victims are paid compensation or reparations, and the commission’s powers to prosecute those found guilty of abuses. Failure to eliminate the gaps, civil society says, could lead to Chinamasa abusing his ministerial powers by dictating what the commission should and should not investigate.

ZHRC chairperson Reginald Austin told IPS that his commission has concerns about Chinamasa’s apparent attempt to control its activities.

Austin explained that Chinamasa had included a clause in the ZHRC bill that compels the commission to regularly brief him and also get his approval on various issues, which include the financing of the ZHRC and who it meets with.

“We are of the view that our funding and budgetary updates as well as (the report on) our activities should not go to the minister but to parliament since we were established by an act of parliament,” said Austin.

He said the commission also had issues with the attempt by the minister to take away their transparency.

The minister, as outlined in the current bill, can label sensitive information as “secret” and withhold it from the public.

“What that provision does is hold us back from disclosing certain details to the public despite the fact that the public is entitled to that information. That on its own is tantamount to unnecessary interference by the minister,” Austin added.

Chinamasa, in response, said parliament would make its decision on the bill soon.

“The bill is before parliament. I do not see the reason why people should make a noise now before the bill is (passed into law),” he told IPS.

“There is no need to press panic buttons at this moment,” Chinamasa added.

However, he refused to discuss claims that he was trying to be the commission’s “dictator”.

“I will not comment on such matters. I am the minister of justice and not a dictator. I simply lay the provisions of the law and if they are passed by parliament, they will become law. I do not dictate,” Chinamasa said.

The Zimbabwe Lawyers for Human Rights (ZLHR), a group of practicing lawyers that seeks to protect the rights of Zimbabweans from being violated by the government, noted that the current state of the proposed law would result in an ineffective commission that depends on the direction given by the justice minister in its operations.

“It must be borne in mind that the current foundation of the ZHRC … is weak and problematic and does not, in and of itself, facilitate the creation of an independent institution,” ZLHR said.

Human rights organisations fear Chinamasa could prevent investigations into violations perpetrated by ZANU-PF in the 1980s and push the commission to investigate the post 2008 abuses. Violence erupted throughout the country in 2008 after the disputed elections.

ZANU-PF have maintained that after 2008 Mugabe was not alone in human rights abuses as Morgan Tsvangirai’s Movement for Democratic Change (MDC) also violated ZANU-PF supporters’ human rights by allegedly engaging in violence and murder.

An investigation into post 2008 abuses could also see non-governmental organisations (NGOs) being dragged before the commission to answer ZANU-PF’s allegations that NGOs distributed food to mostly MDC activists and denied food to their supporters.

Asked to comment on whether there were other abuses the commission was likely to probe outside the scope of the post 1980 violations, Austin said the outcome of the ZHRC bill would determine this.

“The parliamentarians are the ones who can state what we will and will not be able to do in terms of the commission looking at abuses, and whether we will be empowered by the law to look at violations that belong to the pre-independence and post-independence eras,” Austin said.

South African-based Crisis in Zimbabwe Coalition (CiZC) coordinator Dhewa Mavhinga said civil society organisations were deeply concerned that Chinamasa was trying to curtail the commission’s work by “smuggling through the back door” provisions that would effectively make it toothless.

“What the minister is trying to do is to create a paper tiger,” said Mavhinga.

“He is trying to smuggle into the law provisions that give him total control of what the commission can do and cannot do. We, as civil society organisations working on the Zimbabwean crisis believe, firmly, that the minister should not guide the commission in its work and should make the commission as independent as possible,” he added.

He said his organisation believed that it is the commission’s mandate to probe human rights abuses perpetrated in Zimbabwe by the Mugabe regime.

“These violations were committed and there is no way they can be swept under the carpet without being addressed,” Mavhinga added.