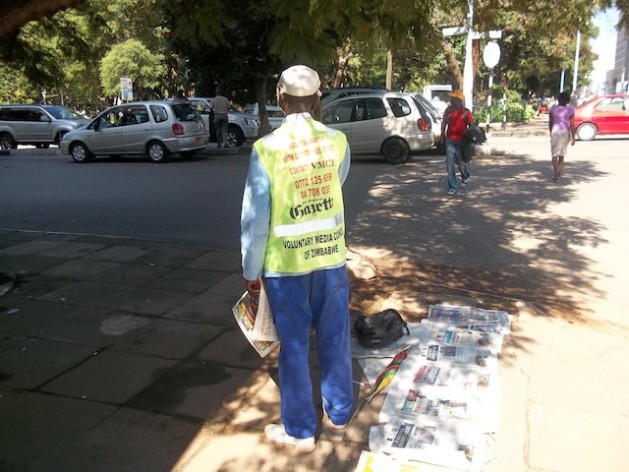 Zimbabwe's thousands of retrenched workers have no option but to work in the informal sector in jobs like vegetable and newspaper vending. Some have even taken on part-time cleaning jobs. Credit: Jeffrey Moyo/ IPS

HARARE, Mar 29 2013 (IPS) - As former Reserve Bank of Zimbabwe employees went to the Labour Court in Harare this week hoping for a ruling in favour of the finalisation of their retrenchment packages, the country’s public and private sectors continue to lay off workers without paying the promised compensation.

Economists in this southern African nation say companies that have had to cut down on their number of employees in order to boost falling profits are finding it hard to raise retrenchment packages for their laid-off workers.

“The country’s economy is underperforming and without local manufacturing occurring, there is little or no money for companies to award retrenchment packages to laid-off workers,” independent local economist Kingston Nyakurukwa told IPS.

Hapson Munjanja, another independent local economist, concurred and added that businesses could not be blamed for being unable to pay their laid-off workers compensation.

“It is not the fault of companies that retrenched workers aren’t getting their compensations, but government policies have never been good for employers to do profitable business as they scare away investors,” he told IPS.

But it has not stopped dismissed workers from seeking compensation. On Mar. 27, 1,456 former RBZ employees were in the Labour Court in Harare, as the bank is yet to pay them their full retrenchment packages after they were laid off in 2011 in a desperate cost-cutting measure. The case was postponed to Apr. 3.

Webster Ngundu, chairperson for the retrenched RBZ workers group, told IPS that their situation had degenerated into a humanitarian crisis.

“With no jobs and with no retrenchment packages, several former RBZ workers and their families are no longer on medical aid. And many of our children are at home because we cannot afford the school fees,” Ngundu said.

“We have several cases where former RBZ workers killed themselves after the bank failed to fulfil its promises, with more retrenched workers succumbing to stress,” said Ngundu.

Mildred Chikukwa, a 37-year-old single mother of four who was let go from RBZ in 2011, told IPS: “Owing to my desperate situation, I may as well opt for commercial sex work to feed my children.”

But RBZ governor Gideon Gono has been on record claiming that the bank has no money to pay retrenched workers due to liquidity challenges. One of the reasons is because the central bank stopped printing money in 2009, opting to adopt a multi-currency regime to beat hyperinflation under the Zimbabwean dollar.

The RBZ is not the only case as several other public and private firms like Rio Zim, a local mining company; Air Zimbabwe and the Cotton Company of Zimbabwe also dismissed hundreds of workers between 2011 and 2012.

While there are no recent figures, a 2009 report by the United Nations Office for the Coordination of Humanitarian Affairs stated that the country’s unemployment rate was 94 percent. A great majority now work in the informal sector. And renowned economist Eric Bloch went on record saying that at the peak of Zimbabwe’s economic crisis from 2000 to 2010, an estimated 15,000 to 20,000 workers were retrenched.

Statistics by the Employers’ Confederation of Zimbabwe (Emcoz) show that even after the country’s economic crisis, retrenchments continue.

In 2011, 4,432 workers were retrenched from both the private and public sectors, compared to some 6,972 who were laid off in 2010. In 2012, the Ministry of Labour and Social Services alone approved the retrenchment of 1,681 workers nationwide, bringing to over 6,100 the number of workers the government approved for retrenchment in less than two years.

“Several industries have turned into shops, and the country (has turned) from a manufacturing to a supermarket economy,” Emcoz’s director, John Mufukari, told IPS. He said that retrenchments increased when the country adopted a multi-currency regime, and wages began surpassing production levels.

One top labour ministry official who preferred not to be named told IPS: “Reduced product demand, outdated machinery, lack of raw materials, lack of working capital and low production capacity are the factors leading to retrenchment and the subsequent shut down of industries.”

Economist Godfrey Dupwa told IPS that this is because there are only a few employees left to retrench.

Percy Mcijo, regional officer of the Zimbabwe Congress of Trade Unions, told IPS that several companies initially failed to pay salaries to their workers prior to retrenching them.

“Due to the hardships they experience living in towns, numerous laid-off workers end up returning to their rural homes, subsequently dying without getting their retrenchment packages,” Mcijo said.

Many retrenched workers, like 44-year-old Donson Mbizi from Harare’s low-income suburb Highfields, have not been able to find steady employment after losing their jobs.

“I lost my job in 2009 at Patchway gold mine in Kadoma District (in Mashonaland West), where I worked for 16 years. Up to now, I haven’t received my compensation and I’m now a vegetable vendor,” Mbizi told IPS.

He said that although he took his grievance to the labour courts, nothing came of it.

“The idea that people are deserving of compensation if their employers can no longer retain them has never been properly justified. The employees’ compensation for their labour was given to them as their wage every month while they were working. Why should compensation continue when their work is no longer needed?” Robertson told IPS.

But chairperson for the Council of Social Workers in Zimbabwe Philip Bohwasi said that the lack of compensation for laid-off workers had a bearing on their dependents.

“The suffering of the retrenched workers is transferred to their families, children and spouses. Tension and stress grows, leading to unwarranted domestic disputes and eventual violence and abuse of children,” Bohwasi told IPS.