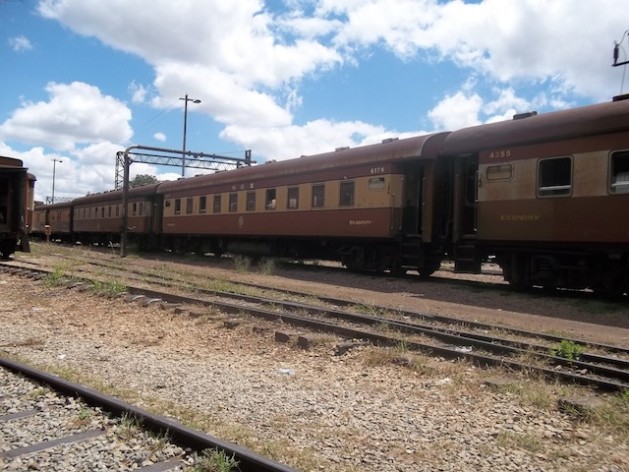 HARARE, Mar 25 2013 (IPS) - Zimbabwe’s rail transport system may be nearing extinction if the government does not take drastic action to solve the series of operational challenges that have made commuter and goods train services rare here.

“The railway services are certainly in crisis because they have to keep paying about 7,000 people – most of whom have little chance of actually earning revenue for the system. The services are a drain on the economy,” John Robertson, a prominent economist from Robertson Economic Information Services in Harare, told IPS.

Independent economist Richard Laiton added that there is a possibility that it could mean the end of this southern African nation’s railway system. “It is unfortunate that the railroad transport system is turning idle and passive and may for the first time in history be phased out in Zimbabwe,” he told IPS.

According to statistics from the National Railways of Zimbabwe (NRZ), just before 2012 there were 120,000 daily train commuters countrywide. It has since dropped by 20 percent, a figure that NRZ officials said continues to fall.

“We used to have regular local commuter trains, but now they are rarely available and (minibus taxi) operators are daily milking us of our hard-earned cash,” Dickson Chirambwi, a commuter from Harare’s Budiriro high-density suburb, told IPS.

The recent fuel hikes have done little to ease the situation. On Mar. 11, Finance Minister Tendai Biti announced a 20 and 25 percent increase in excise duties on diesel and petrol respectively as a way to raise money to pay for Zimbabwe’s elections later this year. Currently, a litre of fuel costs between 1.53 dollars for diesel and 1.59 dollars for petrol.

But these commuter train services are now rare. Speaking to IPS on condition of anonymity, top NRZ officials in Harare told IPS that the railway’s numerous locomotives, wagons and coaches were now out of order, resulting in the struggling company battling to keep most of its workers.

Disgruntled NRZ workers continually protest for increased wages and operations at the railway are often disrupted because of this. Recent protests over wages saw the NRZ cancelling its Bindura and Chinhoyi line.

Dabuka is a commuter train marshalling yard in Gweru, in central Zimbabwe, and is supposed to be the epicentre of the country’s rail network, connecting trains between Harare and Bulawayo and linking the country with Mozambique, South Africa, Botswana and Namibia. But it is now desolate owing to reduced train commuters and goods trains passing through the siding.

Robertson said that considerable funding was needed to restore the railway services.

“We also need to restore stability to many of the sections of railway after years of neglect and we have to virtually rebuild the electronic traffic control and signaling systems. Many of the more important technical skills have been lost over the years of decline, so these too must be replaced. It all adds up to a very large and very expensive challenge,” he said.

Zimbabwe is still recovering from an economic crisis. Between 2003 and 2009, the country had one of the worst rates of hyperinflation in the world and its year on year inflation was reported as 231 percent. Prices of goods doubled here everyday and the Reserve Bank of Zimbabwe was forced to issue a 100 trillion  Zimbabwean dollar note.

Zimbabwe National Chamber of Commerce economist Kipson Gundani told IPS that the state-owned NRZ should be allowed to operate on a commercial basis.

A development economist with the Labour and Economic Development Research Institute of Zimbabwe, Prosper Chitambara, told IPS that the NRZ needed recapitalisation to save it, but the government said it did not have the funds.

Businesspeople said they have also been affected by the dwindling rail transport services.

“Business used to be more viable for me during the days when I used to transport my tires for resell using goods trains from South Africa, but now I have to fork out more money hiring heavy trucks because goods trains are no longer reliable,” Brighton Mugadzi, a local businessman, told IPS.

Public relations manager for the NRZ, Fanuel Masikati, has been on record blaming the ailing company’s poor performance on the more than 90 Bulawayo firms that shut down last year.

But many are afraid that without trains, and with the increased transport costs, ordinary citizens and pensioners will be strained by consequent increases in prices of basic commodities.

Women vendors are among those hit by the reduced commuter rail services as they used to rely heavily on the trains to get to Mbare-Musika, an old, poor township in Harare, which has a major trading fruit and vegetable market.

“Commuter trains used to charge us 0.20 dollars per trip, but now we rarely see them operating,” 43-year-old Margret Chihwai, a vendor and single mother from Mufakose, a low income suburb in Harare, told IPS.

She said to get to the market now she has to use minibus taxis and fork out one dollar per trip during morning peak hours.

Many who once operated as vendors on commuter trains, like the blind 46-year-old Garikai Zinhu, have since plunged into suffering.

“I used to follow commuter trains on a daily basis, vending on the trains and that used to help me sustain my family. But now I’m without means to fend for my family,” Zinhu told IPS.

Meanwhile, industrialist Nickson Mhike told IPS that something needed to be done soon to avoid a crisis.

“Zimbabwe may face the subsequent disappearance of commuter and goods trains if urgent efforts are not made on time to solve the crisis at the NRZ inflicted by a decade-long economic meltdown,” he said.