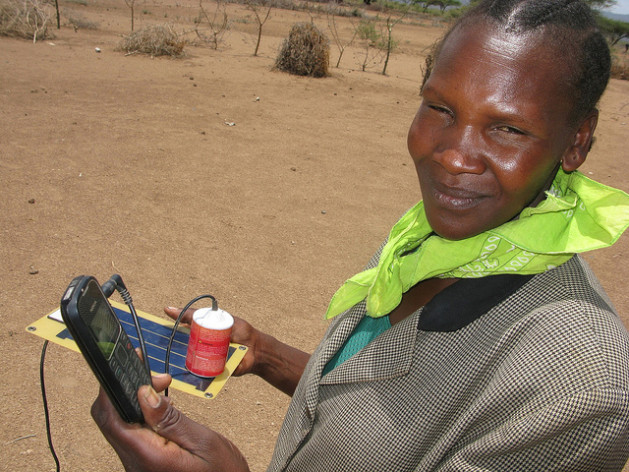 Because of a lack of electricity in Zimbabwe’s rural areas, most people have to charge their mobile phones on solar-powered chargers. Credit: Isaiah Esipisu/IPS

HARARE, Sep 4 2013 (IPS) - Prosper Muripo rents a small space in a general dealer’s shop at the Gotora shopping centre in Zimbabwe’s Mashonaland East province. He is one of the many people in rural Zimbabwe who earn a living selling recharge vouchers and charging mobile phone batteries on solar-powered chargers.

“I charge 50 cents to charge a battery for 30 minutes and a dollar for an hour. I also charge non-owners of mobile phones 50 cents to make a one-minute phone call,” Muripo told IPS.

Rural Zimbabwe is characterised by a lack of proper infrastructure, a limited electricity supply and poor road networks. Traditionally, communication to these areas has always been limited.

“Job notifications can now be sent on mobile phones. I’m not employed and when work is available in the city and the major towns I can be notified.” -- Rural Zimbabwean Miriam Chauke

However, over the past five years mobile phones have begun providing a means of communication, connecting Zimbabwe’s rural population with urban dwellers.

“The increase in mobile penetration has been triggered by increased investment in communication infrastructure in both urban and rural areas, meaning that marginalised people can now afford to use mobile phones,” POTRAZ acting director Alfred Marisa told IPS.

Mobile phones have slowly become the simplest and cheapest mode of communication in this southern African nation.

According to the Zimbabwe Statistics Agency’s 2011-2012 Poverty Income Consumption and Expenditure Survey, which was released in June, 7.7 percent of Zimbabwe’s economically active population is unemployed. This is a marked contrast to previously reported unemployment figures of 85 to 90 percent.

The report also noted that 8.2 million Zimbabweans in rural areas are poor, while 10.7 percent of the rural population is unemployed. It is estimated that 72 percent of Zimbabwe’s  12.75 million people live in rural areas.

But despite these high poverty figures for rural Zimbabwe, mobile phone usage is growing rapidly there.

According to Frost and Sullivan Growth Partnership Services, an international company that conducts business research to accelerate growth, “despite the high levels of unemployment, the number of mobile phone subscribers in Zimbabwe has increased from less than two million at the end of 2008 to more than 10.9 million in 2013.” The country’s mobile phone users are expected to reach 13.5 million subscribers by 2015 and the industry will be worth 1.34 billion dollars by 2016.

Much of this increased usage has been attributed to a massive decline in SIM card prices. In 2008, a SIM card cost about 90 dollars, now it costs less than one dollar. And since 2009, when Zimbabwe opted to adopt a multi-currency regime to beat hyperinflation under the Zimbabwean dollar, Chinese-made mobile phones have become easily available here. On average they cost about 21 dollars.

Mobile phone dealers who sell Chinese-made products in Harare say they are doing brisk trade as a result of the affordability of their products.

“Business is booming, especially during the tobacco harvesting season when many rural farmers auction their produce [in the city]. Since the multi-currencies system brought economic stability, people have steady incomes and can save to purchase gadgets such as mobile phones, which were [previously] reserved for the rich and elite,” mobile phone seller Sylvester Mbirimani told IPS.

Telecel Zimbabwe, the country’s second-largest mobile phone operator, has been expanding and upgrading its network over the last two years to access more subscribers in rural areas.

“Telecel has been creating value for money for its clients. We were the first to slash the price of SIM cards and we are committed to satisfy our clients and promote growth in all unconnected areas,” Telecel marketing director Octivius Kahiya told IPS.

Many rural Zimbabweans like Miriam Chauke from Mutare, Manicaland Province, say that the access to mobile phones has empowered them. Chauke is unemployed but she worked part time as a manual labourer and was able to earn enough money to purchase a SIM card and a cheap mobile phone.

“It now seems that mobile phone use is becoming a basic human right, because they are offering the opportunity to help [close] communication barriers that were present in the past.

“Job notifications can now be sent on mobile phones. I’m not employed and when work is available in the city and the major towns I can be notified [by SMS subscription service],” Chauke told IPS.

Mobile phones have also compensated for poor banking services in rural areas thanks to mobile banking. Now rural Zimbabweans are able to supercede the rigid rules of formal banking and make financial transactions. However, this still remains a fledgling market as most rural Zimbabweans still mostly use their mobile phones for texts and making calls.

Economic analyst Eric Shabangu predicts that the mobile phone banking has the potential to become the biggest banking platform in Zimbabwe.

“The rapid spread of mobile phone penetration, as opposed to bank outreach, has created a fertile ground for mobile money to grow in Zimbabwe. Mobile banking could be the platform for rapid financial inclusion of people that now only need mobile phones to access a certain range of essential financial services they never used to get,” Shabangu told IPS.

According to Josham Gurira, an economist at the University of Zimbabwe, access to mobile phones will continue to change rural Zimbabwe.

“Access to information and communication technologies is now considered a basic human right and mobile phones have offered the best opportunity to enhance the digital divide which could have prevented it. The use of mobile technology has empowered many people and is regarded as a key tool in helping alleviate global poverty,” Gurira told IPS.

“The adaption of mobile technology has redefined the way people communicate and the growth in mobile phone use has shaped a new way of engagement and connection. Mobile phones are providing Zimbabwe with an opportunity to develop,” he said.