CAPE TOWN, South Africa , May 8 2012 (IPS) - On a continent of over one billion people, where half the population have mobile phones, the use of mobile communication and internet technologies is crucial to boost development in Africa. 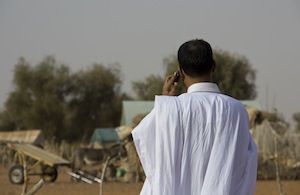 This is according to Gabrielle Gauthey, executive vice president of global telecommunications provider Alcatel Lucent. She was one of the presenters at the United Nations Millennium Development Goal (MDG) Review Summit held in Cape Town, South Africa, from May 3 to 4.

“We did not anticipate how rapid mobile broadband would be appropriated in Africa. There will be a computer in every pocket sooner than we think,” Gauthey told IPS. She added that Kenya has made rapid progress, having already rolled out 3rd generation mobile communications.

There are only two and a half years to go until African countries are expected to reach the MDGs, and information and communication technologies (ICTs) will help the continent achieve this. Through the eight MDGs, countries around the world have committed themselves to significantly curb poverty and hunger, improve education and health, and create environmental sustainability by 2015.

Gauthey, who is based at Alcatel’s Paris headquarters and involved in the firm’s expansion into Africa, argues that ICT will help the continent to achieve the economic growth it needs to end poverty.

Q: How can ICT help Africa reach the MDGs?

A: I think ICT will be absolutely key, especially for countries that lag behind with other infrastructure development…In 2000, you had about five million mobile phones in Africa. Today, we have about 500 million. In 2015, we expect it to be 800 million. Already, 20 to 30 percent of these phones are internet enabled. In 2015, it will be 80 percent.

It’s proven that a 10 percent increase in broadband triggers a 1.5 percent GDP increase in a country. In developed countries, small and medium-sized enterprises are shown to have doubled their business once they are linked to the internet. In Africa, we will see a similar development, but largely through mobile broadband rather than fixed lines.

Q: Infrastructure remains a bottleneck to development throughout Africa. Can ICT circumvent that?

A: There is a false impression that ICT doesn’t need infrastructure. It does, unfortunately. It’s less capital intensive than transportation, such as roads and railways, but it does need investments, like cables, towers and so on.

There are ways to speed up ICT development, for example by governments obliging operators to share expensive infrastructure and thereby ensuring that they don’t duplicate investments. For instance, you can reduce costs by incentivising infrastructure-sharing models without preventing competition.

Q: Where on the continent do you see a strong push towards ICT?

A: Some countries, like Kenya, have leapfrogged. They have just rolled out 3G and already are thinking of rolling out 4th generation broadband, especially to rural areas, because they know it’s the only way for them to progress.

In the slums of Kenya’s capital Nairobi, 80 percent of people prefer to skip a lunch so that they can afford having a mobile phone. They are willing to make that trade-off because a mobile phone helps them to optimise their lives in the long term through better access to information and resources, including food. Access to information has become as vital as water and electricity.

We have also seen how cashew nut farmers in Ivory Coast access international market information and prices through their mobile phones to optimise their sales. It works, even if it’s just via text messages.

Q: Would you describe Kenya as the African leader in ICT?

A: Kenya is doing great things. Its government has a strong awareness of the importance of ICT and has started to foster public private partnerships with clear goals in the sector. Kenya is an innovative country that might even bring “reverse innovation”, which means innovation coming from a developing country that will later be taken up by the developed world. Such innovation could even come from the users of mobile technology, especially from the young generation.

Q: Is Africa ready for the mobile revolution you expect?

A: African countries need to build the infrastructure for those mobile services, because people will demand them. For that you need investment, first in submarine cables, then in terrestrial fibre cables, especially to reach out to the less densely populated areas.

Then you will get sufficient broadband spectrum to install next-generation wireless internet access. The submarine cables are largely in place. What is now most crucial in Africa is investment in terrestrial cables for distribution of spectrum countrywide. The World Bank, for instance, has funds to help reach out to those less developed areas.

Q: In what way should governments get involved?

A: You need good regulation for the allocation of spectrum, to encourage competition and to decrease prices. Then you need public-private partnership models, for example a public investment in partnership with private service providers that have expertise in building telecommunication networks, either to subsidise them in remote, less population-dense areas or to attract long-term funding for these networks.

Q: What should governments do to attract competition?

A: Governments need to have a broadband plan, with clear targets and ways to achieve these targets. For this, governments need a stable regulatory framework with rules that don’t change all the time, as well as an independent regulatory authority that doesn’t change with every government. A lot of African countries have set those targets already. Now they must implement them.

Q: Connectivity is one issue. Affordability is another. When will all Africans, not only the middle class, be able to afford mobile broadband?

A: Prices will drop once you have enough connectivity and enough competition, and once broadband services are less scarce. Scarcity makes it expensive. That will take some time. But a lot of measures of using ICT to help reach the MDGs don’t necessarily need mobile broadband. Sometimes simple text messaging can go a long way towards development.

Q: Can you give examples for where this has already worked?

A: Text messaging can, for instance, be used in the health sector to track an epidemic like malaria. There is also the possibility to have free “call me” services or free call numbers. Those are mobile experiences with reduced costs.