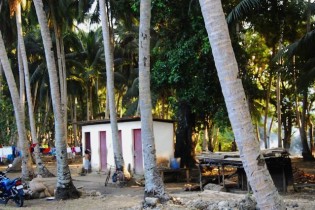 By Malini Shankar
Midway through Wildlife Week in India, celebrations have been marred by news that 29.8 kilogrammes of ivory, worth 336,800 dollars, had been seized on the Andaman Trunk Road.

By Malini Shankar
Twenty two-year-old Ajay Kallu, hailing from the Bakultala village in northern Andamans, was devoured by an estuarine crocodile when he waded waist deep into a creek to fish on the morning of Aug. 1, marking the fifth fatal crocodile attack in 28 months in the remote Islands that lie at the juncture of the Bay of Bengal and the Andaman Sea.

By Malini Shankar
Islanders on India’s Great Nicobar Island in the Bay of Bengal, barely 144 kilometres from Sumatra, fled when they felt the first tremors of the 8.6 magnitude earthquake on Apr. 11. They leaped across creeks inhabited by estuarine crocodiles, haunted by memories of the devastating 2004 Asian tsunami that took the lives of thousands of people.
ADVERTISEMENT ADVERTISEMENT