This is the second of a two-part series on incorporating disaster risk reduction into the Sustainable Development Goals (SDGs). 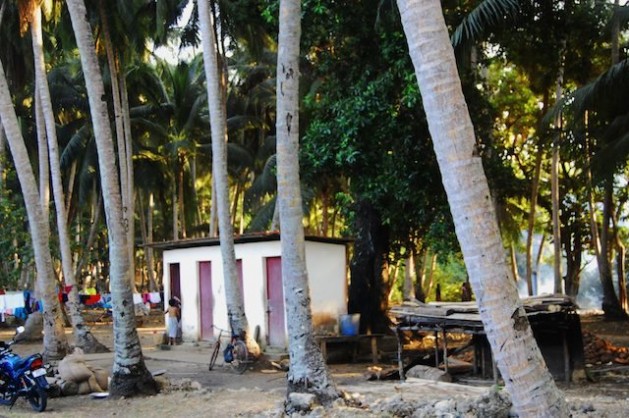 Local communities in India's Andaman and Nicobar Islands (ANI) have grown accustomed to modern water and sanitation infrastructure in the decade since the Asian Tsunami. Credit: Malini Shankar/IPS

CAR NICOBAR, India, Sep 5 2014 (IPS) - When the 2004 Asian Tsunami lashed the coasts and island territories of India, one of the hardest hit areas were the Andaman and Nicobar Islands (ANI), which lie due east of mainland India, at the juncture of the Bay of Bengal and the Andaman Sea.

Remote and isolated, the tribal communities that occupy these idyllic isles have lived for centuries off the land, eschewing all forms of modern ‘development’ and sustaining themselves off the catch from the rich seas that surround them.

But when the tsunami struck without warning on Boxing Day, and traditional wooden houses erected on bamboo stilts were washed away, surviving commuties scattered across these islands have been forced to reckon with their primitive lifestyle and open the doors to some changes, especially in Car Nicobar, capital and administrative nerve-centre of the Nicobar Islands.

One of the most notable changes has been in the realm of sanitation, hitherto an unhealthy mix of open defacation and forest-based waste management.

Before a major relief and rehabiliation operation got underway in the aftermath of the tsunami, many tribal communities in Nicobarese villages had rejected potable water schemes such as the desalination plant installed in the village of Chaura, where the population of 1,214 people expressed hesitation about drinking water “from a machine”.

Toilet facilities were also extremely limited, with most residents “answering nature’s call by going behind a bush”, according to a sports ministry official from the division of Kakana who gave his name only as Benedict.

When IPS visited an interim tsunami shelter in Kakana, Car Nicobar, in 2007, 25 months after the tsunami, the situation had scarcely improved. A hole in the ground across from the relief shelter served as a communal facility, and could only be accessed by leaping onto a mound of dug-up earth and navigating the moist forest floor, hoping to avoid an encounter with snakes en route to the bathroom.

The ‘structure’ consisted of nothing more than a deep hole in the forest floor, covered on all four sides by plastic sheeting. It lacked a roof, a tap and a light.

Locals were still trying to come to terms with the fact that their freshwater supply, once a boundless natural bounty originating from springs in the volcanic islands, had become badly polluted after the natural catastrophe.

A World Health Organisation (WHO) report on sanitation prospects on the island in early 2005 found several cases of diarrhoeal outbreak among survivors housed in temporary camps, which affected hundreds of the roughly 1,300 residents.

Now, most villages have toilets and sanitation systems in individual homes, and locals are slowly opening up to the necessity of improved waste-management systems. IPS interviewed tsunami survivors across five Nicobar islands – Car Nicobar, Kamorta, Campbell Bay, Little Nicobar, and Katchall – who expressed the universal opinion that receiving access to water and sanitation facilities, as well as permanent shelters designed and constructed by the government of India, has done them good.

“There are a few issues like water scarcity and discomfort in the humid summer months,” said 46-year-old Muneer Ahmed, chief tribal captain in Pilpillow, Kamorta. “Zinc sheet roofing and concrete houses are tough as they are weather insenstive, compared to weather-sensitive straw huts.”

“But,” he told IPS, “We are grateful for greater security.” His words reflect a prevailing attitude across the islands that returning to flimsy thatched-roof homes – despite their proximity to the beach, which most Nicobarese depend on for sustenance – is simply not an option with the memory of the killer waves still fresh in the minds of the survivors.

Coastal fisherfolk in Tamil Nadu’s tsunami battered coasts of Nagapatnam and Cuddalore are also benefiting from similar schemes, many of them overseen by the Swiss Development Agency. “We have tiled bathrooms with ventilation and western toilets with bidets,” a fisherwoman named Vanitha in Nagapatnam told IPS.

Such developments among fisher communities are crucial as the international community finalises a new roadmap for sustainable development that will replace the Millennium Development Goals (MDGs) in 2015.

Key among the new poverty eradication targets, known as the Sustainable Development Goals (SDGs), will be the inclusion of the most marginalised segments of society.

In India, this includes fisher communities who were the worst hit in Tamil Nadu and Pondicherry, with about 150,000 fisherfolk losing their homes to the tsunami. In ANI, close to 10,000 people lost their lives and and scores more were exposed to tough living conditions.

Despite construction by the United Nations Children’s Fund (UNICEF) of 8,500 latrines around the islands after the tsunami, there remains a 35 percent deficit of decent sanitation facilities today.

In general, health indicators among the islands’ tribal population are higher than in other parts of India, with a maternal mortality ratio far below the national average of 250 deaths per 100,000 live births.

Although other health indicators like life expectancy rates were higher in the states of Kerala and ANI (67.6 percent and 73.4 percent respectively), the tsunami brought fresh new troubles, such as fears of malaria outbreaks, or epidemics of vector-borne diseases like dengue.

Relief workers and emergency response teams, sponsored by the government, international NGOs and the United Nations, took the lead on eradicating mosquito breeding grounds, distributing bednets, spraying insecticide in mosquito-heavy areas, as well as stocking local water bodies with a species of fish with an appetite for mosquito larvae.

According to a WHO assessment a year after the tsunami, Indian health authorities also launched measles vaccinations campaigns in the areas hardest hit by the disaster, namely the state of Tamil Nadu and the union territory of ANI, boosting measles immunisation coverage to 96.3 percent in the latter.

While they hope against hope to be spared another disaster, some of India’s most vulnerable communities are today far more resilient than they were a decade ago.

Part 1 of this series can be read here.