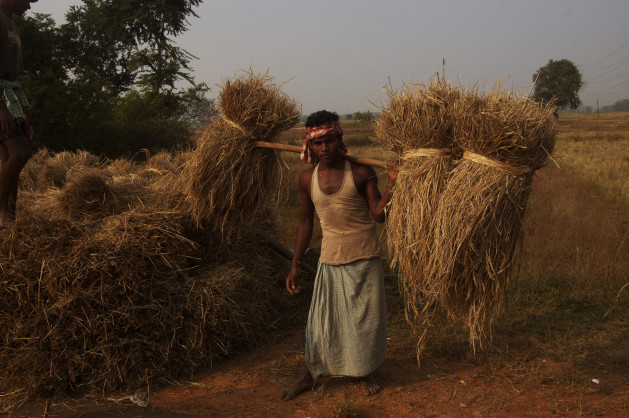 A young man from the Paudi Guhiya tribe salvages crops from the agricultural fields in Lahunipada in northern Orissa that were battered by floods in October following Cyclone Phailin. Credit: Malini Shankar/IPS.

BHUBANESWAR, India, Nov 30 2013 (IPS) - More than a month after Cyclone Phailin battered Orissa, tribes in the eastern Indian coastal state are still feeling its wrath. Besides the damage to their homes and hearths, it has also meant a loss of their traditional food.

“Calamities like Cyclone Phailin affect all equally, but the tribes are far more vulnerable to the impact of calamities because of lesser resilience,” Special Relief Commissioner P.K. Mahapatra tells IPS.

This is particularly true of a state like Orissa where natural disasters play out repeatedly and where 24 percent of its 42 million population are tribespersons who live off the land.

“Powerful cyclones have battered Orissa like heat-seeking missiles in 70 of the last 110 years,” Mahapatra says.

The native diversity of food consumption has critical significance in terms of culture-sensitive food security during calamities.

“The tribes need at least one season to rebuild,” he says.

Phailin that made landfall Oct. 12 was the most powerful storm to hit India in a decade. Administrative preparedness helped keep the toll at a low 21, according to official data.

But as the state picks up the pieces, many are emphasising the importance of locally procured food during emergencies and pointing out how new consumption patterns introduced during natural disasters can adversely affect tribes.

Take, for instance, Gajapati district where 70 percent of the population is tribal and which was severely affected by Cyclone Phailin.

“Ten percent of the district’s population, including tribes, were evacuated to cyclone shelters and given emergency food aid like everyone else. They have suffered crop loss and damage to thatch roof dwellings,” B.K. Hota, emergency operations officer tells IPS.

A tribal woman in Sundargarh district, which was affected by flooding after the cyclone, says women are concerned that crop loss would affect children’s nutrition.

It is largely for this reason that India’s Central Rice Research Institute in Cuttack town in Orissa has developed varieties of rice that can withstand Orissa’s extreme weather: varieties that can grow in irrigated areas, saline water, drought prone areas, shallow lowlands and water logged areas.

But then the native diversity of food consumption has critical significance in terms of culture-sensitive food security during calamities. In fact, native food diversity dispenses with infrastructure support for food aid distribution.

In the first few days after disasters, the administration provides “flavoured, uncooked beaten rice, high protein biscuits, water and oral rehydration kits” which are easy to pack and distribute.

But the logistics of transporting cargo can be offset by harvesting locally produced yams or sprout/millet porridge, leaving water and sanitation to the administration.

According to the State Emergency Operations Centre of Orissa, in the second phase when relief starts, the administration hands out rice, lentils and monetary subsidies to those affected.

And this is where culture-sensitive food security is critical for communities like tribes.

Doling out partial or pre-cooked food to homeless tribes may be a necessity to avoid starvation, but sustaining them with entirely new consumption patterns can have a long-term impact on their health and constitution.

“Traditionally, tribes walk such long distances to fetch their meagre forest-based foodstuff like tubers or fish catch that they will never get sedentary disorders like diabetes,” Jupiter Das, a Red Cross official in Puri district tells IPS.

Native wisdom defers to seasonal sources of supplementary nutrition, alternate cropping and sustainable development of the economy and society. If a sustainable means of harvesting such native food diversity could be evolved, food aid distribution becomes a lot less complicated, aver experts.

“A total of 55 wild edible tuberous species representing 37 genera and 24 families were inventoried, including 17 species used during food deficiency to meet seasonal shortages,” it says.

“We don’t have information on climate neutral crops. However, some reports reveal that some of the tribes may consume mango kernels during drought and scarcity conditions,” Dr. Avula Laxman of the National Nutrition Monitoring Bureau at the National Institute of Nutrition, Hyderabad, tells IPS on e-mail.

Sambit Rout, a district administration official in Puri district, still remembers what a fisherman near Chilka Lake told him on the night that Cyclone Phailin made landfall: “There is no more cause for worry because the wind has changed direction.”

Rout told IPS: “I was floored by his native wisdom.” He also alludes to an almanac anointed day when tribes in north India stock food grains and fuel wood for imminent calamities.