This is the first of a two-part series on incorporating disaster risk reduction into the Sustainable Development Goals (SDGs). 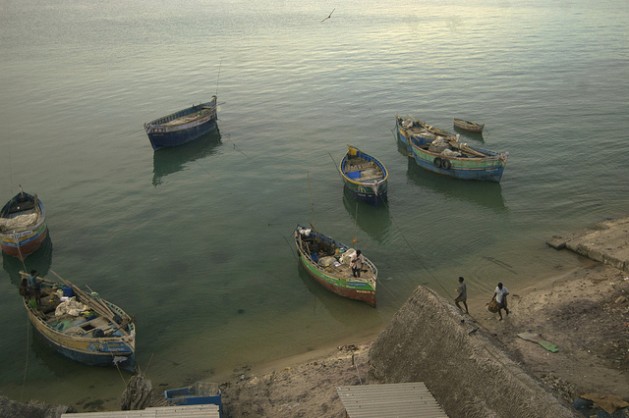 Fisherfolk are one of the most vulnerable groups of people in India. Credit: Malini Shankar/IPS

NAGAPATTINAM, India, Aug 31 2014 (IPS) - As the United Nations gears up to launch its newest set of poverty-reduction targets to replace the Millennium Development Goals (MDGs) in 2015, the words ‘sustainable development’ have been on the lips of policymakers the world over.

In southern India, home to over a million fisherfolk, efforts to strengthen disaster resilience and simultaneously improve livelihoods for impoverished fishing communities are proving to be successful examples of sustainable development.

Here in the Kollam district of the south-western Kerala state,multimedia outreach programmes, using nationwide ocean forecasts, are bringing much-needed change into the lives of fisherfolk, who in southern India are extremely vulnerable to disasters.

“Despite having a 7,500-kilometre coastline and a marine fisherfolk population of 3.57 million spread across more than 3,000 marine fishing villages, India [has no] detailed marine weather bulletins for fishermen [...]." -- John Thekkayyam, weather broadcaster for Radio Monsoon
A fishing family earns on average some 21,000 rupees (about 346 dollars) per month but most of these earnings are eaten up by fuel expenses, repayment of boat loans and interest payments.

Savings are an impossible dream, and fisherfolk have neither alternate livelihood options nor any kind of resilience against disasters.

In Jul. 2008, 75 Tamil-speaking fisherfolk from the district of Kanyakumari in the southern state of Tamil Nadu perished during Cyclone Phyan, caught unawares out at sea. The costal radio broadcasts, warning of the coming storm, did not deter the fishers from heading out as usual, because they could not understand the local language of the marine forecasts.

Earlier this year, on Jul. 22, 600 fisherfolk sailing on about 40 trawlers went missing off the coast of Kolkata during a cyclone and were stranded on an island near the coast of Bangladesh. Only 16 fishers were rescued.

The incident revived awareness on the need for better communication technologies for the most vulnerable communities.

The Indian National Center for Ocean Information Services (INCOIS) is leading the charge, by uploading satellite telemetry inputs to its server, which are then interpreted and disseminated as advisories by NGOs like the MS Swaminathan Research Foundation (MSSRF) and Radio Monsoon.

“These could be marine weather forecasts, advisories on potential fishing grounds, or early warnings of tsunamis. INCOIS generates and provides such information to fishers, [the] maritime industry, coastal population [and] disaster management agencies regularly,” he added.

This new system works hand in hand with community-based information dissemination initiaitves that shares forecasts with the intended audience.

John Thekkayyam, weather broadcaster for Radio Monsoon, told IPS, “Despite having a 7,500-kilometre coastline and a marine fisherfolk population of 3.57 million spread across more than 3,000 marine fishing villages, India [has no] detailed marine weather bulletins for fishermen either on radio, TV or print media.”

Radio Monsoon and the MSSRF multimedia outreach initiatives are the first such interventions aimed at fisherfolk safety and welfare in India.

Radio Monsoon, an initiative of an Indian climate researcher at the University of Sussex, Maxmillan Martin, ‘narrowcasts’ the state of the ocean forecasts on loudspeakers in fisherfolk villages, asking for fishers’ feedback, uploading narrowcasts online and using SMS technology for dissemination.

“As our tagline says: it is all about fishers talking weather, wind and waves with forecasters and scientists. It contributes to better reach of forecasts, real-time feedback and in turn reliable forecasts,” Martin told IPS. Information is passed on to fishers via three-minutes bulletins in Malayalam, the local language.

Ultimately all this contributes to enhanced safety and security for fisherfolk.

According to S. Velvizhi, the officer in charge of the information education and communications division at the MSSRF, “The advisories from INCOIS are disseminated through text and voice messages through cell phones with an exclusive ‘app’ [a cellphone application] called ‘Fisher Friend Mobile Application’.

“We also broadcast on FM radio in a few locations, we have a dedicated 24-hour helpline support system for fishers and a GSM-based Public Address system,” she added.

On the tsunami battered coasts of Nagapattinam and Cuddalore in Tamil Nadu, fisherfolk have become traumatised by anxiety, a depleting fish catch, changes in coastal geography and bathymetry, increase in loan interests, threats to their food and livelihood security and loss of fishing gear and craft.

The information dissemination services undertaken by MSSRF include – apart from ocean state forecasts –“counsel to fisher women, crop and craft-related content, micro finance, health tips, awareness against alcoholism [and] the need for formal education for fishers’ children all disseminated through text and voice messages” according to S. Velvezhi.

Summing up the cumulative effect of the initiatives, 55-year-old Pichakanna in MGR Thittu, who survived the tsunami in Tamil Nadu’s Pichavaram mangroves on Dec. 26, 2004, told IPS, “Thanks to MSSRF interventions on community radio we have learnt new livelihood skills like fishing whereas before the tsunami we were hunter-gatherers or daily-wage agricultural labourers.

“Our children are now getting formal education, we have awareness about better health and hygiene and alcoholism has decreased noticeably; this has helped [eliminate] unwarranted expenditure on alcohol and improved our health, livelihood and food security for all,” he added.

“We also understand the significance of micro-finance, water, sanitation, health and hygiene, and most importantly, alcoholism is declining.”