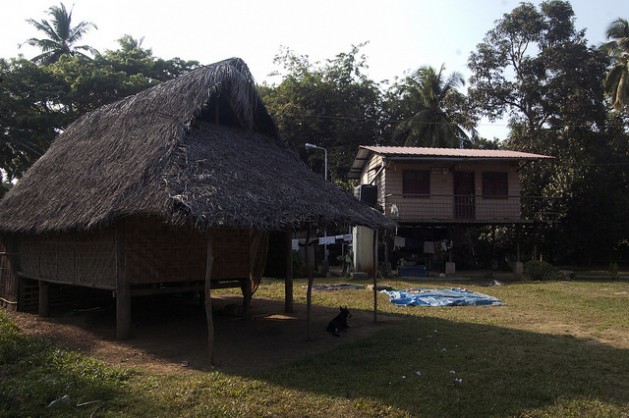 A rare sight of a traditional hut of the Nicobarese in the post-tsunami era. Seen here is a Nicobari family that has retained its traditionally designed hut alongside a “permanent shelter” made of concrete that was given by the government as compensation for loss of household in the Asian Tsunami. Credit: Malini Shankar/IPS

PORT BLAIR, Andaman Islands, India, May 12 2014 (IPS) - May and November bring the most vicious cyclones to the Bay of Bengal rim countries in Southeast Asia.

“Going by economists’ definition of supply and demand forces of the market, the Jarawas live in opulence." -- Prof. Anvita Abbi

The cyclones are the harbinger of the monsoons that play out in various densities for months on end across the subcontinent, often putting lives and livestock at peril.

Risking rejection of culture-insensitive food distribution to the evacuees, the governments generally resort to survival rations that stress shelf lives and transportation logistics, often ignoring the native wisdom in nutrition balance and distribution that complements local agro-meteorological and hydro-geological conditions.

For example, in times of cyclones or unseaworthy weather, “the Great Andamanese resort to hunting and gathering,” said Anvita Abbi, a professor at the Centre for Linguistics, School of Language, Literature and Culture Studies in Delhi’s Jawaharlal Nehru University,who has deciphered the language of the Great Andamanese in the Andaman Nicobar Islands.

“When a particular bird sings a song, they know it is time to go turtle hunting on the beach instead of fishing in the sea,” Prof. Abbi told IPS.

The tribes defer to geomorphological conditions and respect Nature’s benevolence for disaster resilience. The governments’ panic might seem redundant to the tribes: no wonder they are at odds with the mainstream society and shun contact with a corrupted system that favours a few.  The tribes’ traditional wisdom helps them literally coast to safety.

“The Nicobarese and Jarawas switch to harpoon fishing in shallow waters during inclement weather. They have boats for deep sea fishing and dugout/outrigger canoes and catamarans for coastal fishing,” said A. Justin Superintending, an anthropologist at the Port Blair Regional Centre of Anthropological Survey of India.

The outrigger canoes and dugout boats are eco-friendly to coral reefs in shallows seas. “The people of Chowra are best known for making fishing boats. In return they barter other goods and services that money cannot buy in the tribal district of Nicobar Islands,” Justin told IPS.

“The Great Andamanese shift their fishing activities to streams and rivers inland when the sea is rough,” added Prof. Abbi.

In Orissa, the tribes and people of the state use five different varieties of rice to complement the seasonal changes in the disaster-prone state.

Alternate cropping with complementary crops that can act as natural pesticide is another tradition of the Soligas in B. R. T. Hills in Karnataka in India. The Soligas also know the art of refrigerating food in bamboo stems.

“The tribal houses are made of sun-dried mud brick with mud plaster and low roof. Small sized door and windows facing the north side are other features of ecofriendly architecture.”

“They adopt different measures such as consumption of low cost foods, reduce food consumption, borrow food or cash depending on their socio economic status, seek assistance from Government or Administration, use stocked grains, or food stocks or rely on savings, may migrate for employment or sell assets to buy food” according to a survey conducted by the National Institute of Nutrition in Hyderabad, Laxman told IPS.

The practise of communal cooking and communal eating is based on sharing resources, and individualism is anathema to tribal society.

Another best practice that they have “transferred as a low cost technology” to modernised humanity is breast milk banks.

Traditional wisdom has it that if a mother dies at childbirth and the child survives, any other lactating mother in the community or even in a hospital assumes the responsibility of breast feeding.

Even when a natural mother lacks enough breast milk, other nursing mothers take over to provide the infant essential nutrition and resilience. In Jarawa society, in fact, every lactating mother breast feeds every newborn infant to foster a bonding in the newer generations, according to the book “Andaman and Nicobar Islands in the 20th Century” by Kiran Dhingra.

“Their kinship terms have evolved. It is not surprising that lactating women who stay back in Strait Island get to babysit the kids of those away in employment in Port Blair. It is therefore not surprising that they breast feed another infant,” said Abbi.

This tradition permeates a cross-section of Indian society, transcending barriers of caste and creed. This is the root of the concept that there are no orphans in tribal societies even if they have “precise linguistic expressions for bereavement of siblings and in laws,” according to Prof. Abbi.

Laxman said that, “Tribals are trying to adopt urban and rural cultures, because of encroachment/migration of rural populations into tribal areas. The tribals’ unique culture is totally changed.

“Because of the Public Distribution System programmes, the tribals are compelled to eat rice continuously, because rice is chiefly/easily available at fair price shops. They are changing their healthy lifestyles to modern unhealthy lifestyles. This was observed especially in Kerala tribal population, leading to high stress, insecurity in their lives, leading to high hypertension and high diabetes even among tribal populations.”

Call them fair weather friends but the hill tribes like “Gaddi and Lahauli tribes of Lahaul and Spiti in Himachal Pradesh India adapt to the geomorphological conditions in the avalanche-prone area to shift their livestock to greener pastures in the plains during summers and stock up food grains and dry rations for the long winters,” said forest officer Hira Lal Rana in Lahaul, Himachal Pradesh.

Prof. Abbi sums up the import of traditional wisdom for disaster resilience. “Going by economists’ definition of supply and demand forces of the market, the Jarawas live in opulence because their demand and supply of their needs is favourably tilted towards the Jarawas.

“The forests supply more than enough of what they need so they live in opulence.  Economists say reaching an equilibrium point of demand and supply curve is the hallmark of development. This is met by the forests. They don’t need and they don’t want our system which creates subservience.”