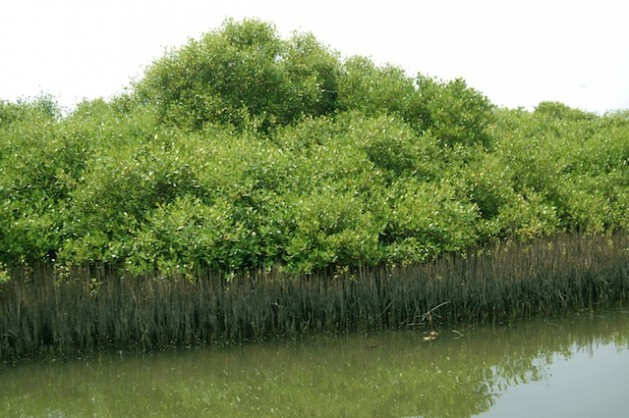 PORT BLAIR, India, Dec 26 2012 (IPS) - In commemoration of the eighth anniversary of the Asian tsunami, Wednesday was a day of prayer and mourning across the Andaman Nicobar Islands – located at the juncture of the Bay of Bengal and the Andaman Sea – and south India’s coastal Tamil Nadu state, two areas that suffered thousands of casualties on that fateful day.

Also known as the ‘Boxing Day Tsunami’, the gigantic waves claimed 230,000 lives across South and Southeast Asia on Dec. 26, 2004. While the northern Andaman Islands were largely spared the pounding, the southern Nicobar Islands were virtually flattened by the tsunami.

As the islanders remembered their dead, they also noted with gratitude that which spared them even more destruction – the mangrove forests that shielded the islands from the killer waves.

“Mangroves act as a living buffer, or bioshield, preventing coastal erosion and damage to infrastructure and loss of life by reducing the force of the winds and waves passing through them; so that there is much less damage inland from these destructive forces of nature,” Alfredo Quarto, executive director of the Mangrove Action Project (USA), told IPS.

“In Thailand, damage to the mangrove-lined coast up to a certain distance inland is documented; evidence suggests that mangrove forests prevented further damage inland. The brunt of the wave force did not pass further inland and was seemingly dissipated by the first line of mangrove defence,” he added.

Denis Giles, editor of the Andaman Chronicle in Port Blair, recounted the horror he experienced eight years ago: “I was asleep when the earthquake struck. I took out my camera and rushed to the Haddo Wharf where a building had collapsed, trapping people. Commotion ruled. Two ships collided.

“I noticed a ripple in the sea, and then water gushed inland. The Chatham Bridge disappeared under the seawater. Radio reports said the Nicobars had vanished. It felt like the world was going to end…mangroves certainly helped save human habitation in the Andamans,” he told IPS.

Great Nicobar – the southernmost island, nearest to the epicentre in Sumatra – was engulfed, possibly because the mangroves bordering the island had been destroyed in favour of building a helipad, school and hospital.

“Nowhere was the violence of the tsunami felt more than in Katchal and Trinket, except perhaps the Great Nicobar Island. Trinket Island was trifurcated and declared unfit for human habitation by the (Indian) Administration. Yet within two years the people of Trinket returned and recolonised the trifurcated Trinket, which was saved by the mangroves,” Samir Acharya of the Society for Andaman Nicobar Ecology (SANE) told IPS.

“The destroyed mangroves are coming up again, perhaps as insurance against any future tsunami. The biggest contribution of the mangroves was protection of the freshwater source, which made recolonisation possible. The large area of mangroves in Katchal substantially reduced the impact of the tsunami and the island would probably be depopulated if the mangroves were not there.”

According to the M.S. Swaminathan Research Foundation’s ‘Toolkit for Establishing Coastal Bioshields’, “Walls of water 10 metres (33 feet) high penetrated up to three kilometres inland in some islands, causing extensive damage in the Andaman and Nicobar Islands and the coastal districts of Tamil Nadu, Kerala, Andhra Pradesh and Pondicherry.”

The experience of the Andaman and Nicobar Islands eight years ago point the way forward for disaster management policy in India, which cannot afford to become complacent and allow its coastal inhabitants to suffer similar destruction in the case of another disaster.

Environmental scientists and researchers believe that policies to tackle the threat of another tsunami need only turn to natural ecosystems for advice.

Dr. V. Selvam, lead author of the Toolkit and director of coastal systems research at MSSRF, singled out the experiences of two villages in Tamil Nadu as examples of the effectiveness of mangrove forests. The first village, T.S. Pettai, suffered little loss of life and property thanks to the presence of mangroves, whereas the mangrove-bereft Muzhukkuthurai village experienced much destruction.

“Eleven people died and 136 houses (88 percent of the village) were totally damaged due to the tsunami in Muzhukkuthurai village,” Selvam told IPS, whereas T.S. Pettai reported no deaths.

Shekhar Kumar Niraj, field director of the Gulf of Mannar Marine National Park, reiterates the role of bioshields in disaster mitigation. “Coral reefs absorb dynamic forces like tsunamis and cyclones. The Gulf of Mannar Marine National Park, comprised largely of an underwater reef, effectively prevented damage from the tsunami while the absence of such reefs north of Rameshwaram saw widespread damage to the coastal communities: Nagapatnam was devastated by the tsunami.”

“The December 2004 tsunami brought home the role mangroves can play in reducing the damage to life and property of coastal communities. Although a tsunami is a rare occurrence, India’s coasts are regularly under threat from various other natural hazards such as cyclones, storms, sea surges and flooding, which cause heavy damages to property and human lives,” Dr. Gladwin G. Asir, a marine geologist who worked with the Tuticorin-based NGO Peoples’ Action for Development, told IPS.

The fact that neither the Government of India nor state governments have acknowledged the role mangroves can play in disaster mitigation speaks volumes for the political will to implement effective disaster risk reduction policies in the country.