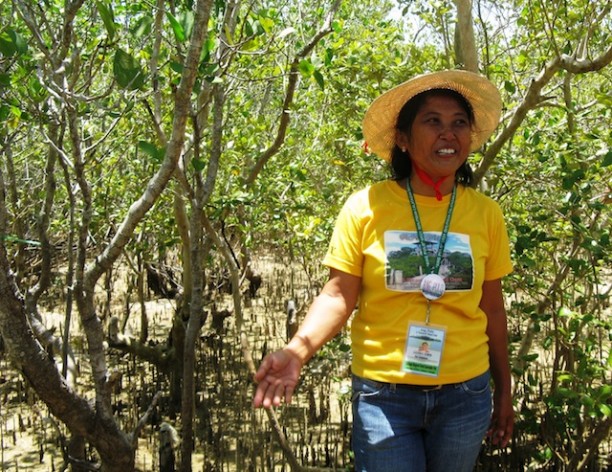 ANG PULO, Philippines, Jun 15 2012 (IPS) - On a humid islet covered with mangroves, Lucena Duman and her neighbours have found a route out of poverty. They work as conservationists and tour guides in this isolated corner of the Philippines.

After feeding her goats, which were once her only source of income, the 46-year-old Duman dons a wide-brimmed sun hat, slips into a yellow guides T-shirt and heads out on her bamboo raft. She is going from her village of small-scale fishers and farmers to Ang Pulo island in the South China Sea.

Her work on the 7.5 hectare islet has brought a new appreciation of mangroves. “All I knew of mangroves before was that they were a source of firewood and food – snails,” she admitted during a break from guiding visitors to plant mangrove seedlings. “But after being trained, we realise it is a richer place for us if we protect mangroves.”

The sea change since late 2009 is not limited to the Philippines. Similar accounts are heard across Southeast Asia as regional and international organisations promoting biodiversity encourage local communities to become foot soldiers to defend what is left of some 63,000 sq km of mangrove forests.

“This is a phenomenon spreading across the forestry eco-system in Southeast Asia and the rest of the continent,” says Simmathiri Appanah, forestry officer at the U.N. Food and Agriculture Organisation’s Asia and Pacific office in Bangkok. “Communities living close to forests are being drawn to manage and preserve them, and what is happening with mangroves reflects this.”

The new formula offers communities an economic incentive to protect mangroves and, at times, the special rights as co-owners of mangroves. “It is better than policies that prevailed before, where government agencies played a dominant role in managing mangroves, ignoring the people who lived nearby,” Appanah tells IPS.

All ten countries that belong to the Association of Southeast Asian Nations (ASEAN), a regional bloc, have programmes to protect these salt-tolerant trees and shrubs with their thick roots. Local communities, school children and even the private sector have been drawn to this effort.

In Indonesia, the largest country in the region and home to 62 percent of mangrove cover in ASEAN, college students rallying under the banner Green Community are involved in managing the coastal ecosystems near their schools, according to the ASEAN Centre for Biodiversity (ACB), an intergovernmental body promoting conservation in the regional bloc. “They plant mangroves with a number of partners.”

In Malaysia, a mangrove conservation project supported by a private bank has “resulted in an alternative source of income for the communities through the establishment of mangrove nurseries,” adds the ACB. In neighbouring Singapore “children (are being taught) how to appreciate its mangrove ecosystem.”

“The territory occupied by the Philippines and the rest of the ASEAN member states houses a third of the world’s mangroves, coral reefs and seagrass areas,” says Rodrigo Fuentes, executive director of ACB, based in the Philippines city Los Banos. “These ecosystems support the highest concentration of coastal and marine fauna and flora in the planet.”

Consequently, the economic value of mangroves needs to be seen in a different light as offering a “stream of ecosystem services” that matter to the fishing and tourism sectors, he explains in an interview. “This paradigm shift is happening now, putting a full value to mangroves to benefit an estimated 600 million people in the ASEAN region who depend on these resources for food and income.”

But there are other benefits, too. Mangroves serve as an important buffer for coastal communities hit by storms that churn up tidal surges, and as a frontline defence of expected sea level rises due to global warming.

Research in Malaysia offers another feature about mangroves helping the planet combat climate change – a high capacity for sequestering carbon. “They represent a potentially vast carbon sink, absorbing and storing excess carbon from the atmosphere,” states Dicky Simorangkir, international advisor to a biodiversity project run by the German international development agency (GIZ). “They are able to sequester some 1.5 tonnes of carbon per hectare per year.”

Yet, such growing appreciation for mangroves is not universal, Simorangkir admits. He points to the steady loss of mangroves for firewood, to produce charcoal, and wood chips and timber for sale. Mangroves are also felled in large swathes to make way for shrimp farms. “About 150,000 hectares of mangroves are lost a year around the globe.”

And so the Ang Pulo mangrove conservation park matters in Southeast Asia, which has seen its coastlines lose some 600 sq km of mangroves annually for the last 20 years. “Only one percent of mangroves are protected globally, like the Ang Pulo reserve,” says Simorangkir.

For Duman, it means guiding those who visit the islet, from university students to Filipinos driving from Manila for a weekend holiday, to discover the signs of a mangrove on the mend after trunks were slashed years ago. “There are more crabs and shrimp and over 20 different types of birds now,” she says. “These mangroves are our future.”