This is the first of a two-part series on the human-animal conflict over space in the Andaman group of islands in India. 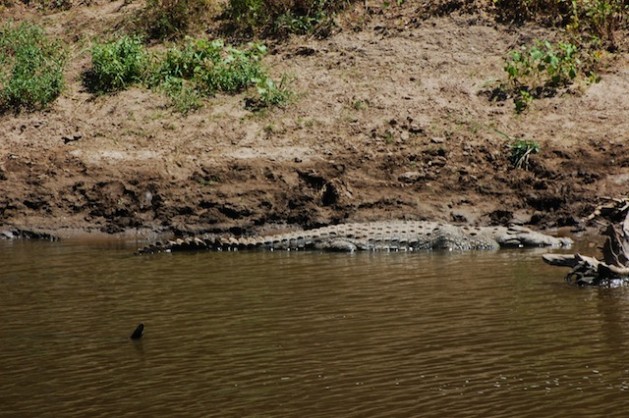 Nile crocodiles and estuarine (saltwater) crocodiles account for the deaths of hundreds of human beings every year. Credit: Malini Shankar/IPS

PORT BLAIR, Aug 15 2012 (IPS) - Twenty two-year-old Ajay Kallu, hailing from the Bakultala village in northern Andamans, was devoured by an estuarine crocodile when he waded waist deep into a creek to fish on the morning of Aug. 1, marking the fifth fatal crocodile attack in 28 months in the remote Islands that lie at the juncture of the Bay of Bengal and the Andaman Sea.

Wildlife officer Dr. Shashikumar told IPS, “On receiving report of this incident the forest officials rushed to the site by road; traffic regulations (for) convoys in the Jarawa Reserves delayed our arrival by nine hours. By then it was dark and too late for search and rescue; we have laid traps to net the crocodile for relocation.”

The first reported incident in this latest string of attacks was a U.S. tourist killed by a saltwater crocodile in April 2010.

“It is impossible to tell why it happened; some experts feel it might have been a migratory crocodile that attacked a snorkeler. It was a very unlucky coincidence because it was the first time ever, and the only recorded incident thus far to take place outside a creek in the open sea,” Samit Sawhney, who was in charge of Barefoot Resorts in Andaman’s Havelock Island at the time of the killing, told IPS.

The mega earthquake off the coast of Sumatra in 2004, which triggered the Asian Tsunami, caused a massive uplift of the landmasses in the Andaman group of islands, which spans 6,408 square kilometres.

This resulted in seawater receding from creeks, thus decreasing the habitat for estuarine crocodiles. The problem was compounded by the devastation of huge chunks of the mangrove forest, which not only reduced habitat but also altered the tides.

“Native wildlife including crocodiles are in the process of adapting to the new environment; while other wildlife like birds have found more water bodies to breed maybe” Chandi told IPS.

Shashikumar believes the tragic incident earlier this month could perhaps have been averted if the two attacks on cattle – ostensibly by the same crocodile in that very area last year – had been reported to the authorities. “The forest department could have at least kept a watch,” he said.

The incidents often go unreported due to the affected populations’ lack of accessibility to mainstream media. But experts believe an increase of reported attacks is largely due to recent media access to hitherto extremely remote areas.

Estuarine crocodiles, which inhabit coastal areas all around Southeast Asia, are the most aggressive of the world’s 23 crocodile species, killing hundreds of humans deep inside Africa, South-east Asia and northern Australia.

Irresponsible disposal of hotel waste, fertilisers, chicken feed, meat leftovers, domestic sewage and effluents from the tourism, logging, marine food processing and paper industries into the creeks have turned crocodiles into scavengers, and predators of other, smaller scavengers like dogs and jackals.

Gradually, crocodiles have lost their fear of human beings. Mohan Halder, head of the Tushnabad village development council located 25 kilometres northwest of Andaman’s capital Port Blair, told IPS that “crocodiles now dare to enter dry land; now we know that all those who went missing during fishing were killed by crocodiles.”

Jarawas, the indigenous inhabitants of the islands, who have fallen victim to aggressive crocodiles while rafting or wading in the creek and lived to tell the tale, only confirm Halder’s suspicions.

Sanjeev Mondal of the Ograbraj Village of Ferrarganj, about 30 kilometres northwest of Port Blair, agrees that “callous waste disposal and illegal slaughterhouses are an issue in Ograbraj”.

“But then in Manpur, where there are no slaughterhouses, a woman who herded her cattle through the creek towards her home was also killed by a crocodile,” he told IPS.

Mondal lays the blame for these incidents with the forest department, which he claims has failed to “take precautions to tie nets in crocodile infested creeks to prevent crocodiles from entering human settlements”.

But these precautions are easier said that done. According to Chandi, “Maintaining enclosures to keep crocodiles out of the village area may not be entirely feasible, given the need for dinghies to navigate into creeks in village precincts.”

Sapan, a farmer from Collinpur village in Ferrarganj, 35 kilometres north of Port Blair, laid out the consequences of this new phenomenon, which has disturbed ancient life patterns of both humans and animals.

“The increase in the crocodile population is because the Forest Department has relocated overpopulated crocodiles into these creeks for ‘wildlife management’,” he charged. “If necessary, the department must kill these crocodiles,” he said angrily.

“Relocating problematic crocodiles to the Loha Barack Crocodile sanctuary in South Andamans is a possibility, but the problem cannot be wished away because carrying capacity is an issue in the sanctuary too,” Shashikumar told IPS.

The latest crocodile attack in Bakultala prompted Member of Parliament, Bishnupada Ray, to call for “identifying and killing the killer crocodile besides shifting the entire habitat of the estuarine crocodiles”. Absent a seismic event to rival the power of the 2004 Sumatra earthquake, which could redesign the entire landscape, this is an impossible task.

“Local communities in the Andaman and Nicobar Islands – both settler and indigenous – have displayed high levels of tolerance toward crocodiles with whom they live and have been living for over a century,” Chandi stressed. “Catchy media headlines, (provoked) by the MP’s statement, could change the way people regard these animals.”

Furthermore, crocodile attacks have been reported in Bakultala, Collinpur, Havelock, Hut Bay, Tushnabad, Ograbraj, Manpur and Baratang. So the idea of identifying, trapping or relocating one lone crocodile is laughable, at least to experts.

Estuarine crocodiles are also guarded by the Wildlife Protection Act as a Schedule 1 “critically endangered animal”, which means killing them would risk imprisonment and fines.

Human encroachment has not only suffocated animals’ habitats but also torn to shreds the delicate balance that had hitherto determined peaceful coexistence between human beings and wildlife.

Increasingly, the relationship is being determined by violence. But experts warn that humans must steer clear of retaliatory acts, as wildlife lives by instinct, not reason.

“If a crocodile cannot live in peace in a creek where else must it go?” asked Zubair Ahmed, editor of the local daily ‘Light of Andamans’ in Port Blair.

Long-term strategies have to be evolved to mitigate human-animal conflict. For example, consumption of locally produced goods and services can minimise the human footprint, and better utilisation of human capital can give a tremendous boost to the economy without ruining the environment.

*Malini Shankar is a wildlife photojournalist, radio broadcaster and filmmaker based in Bangalore, India.