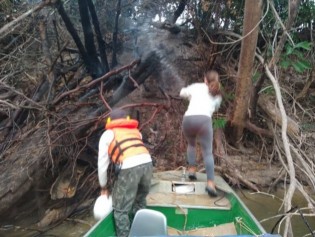 Warming to Ignite the Carbon Bomb

By Stephen Leahy
Rising temperatures are drying out northern forests and peatlands, producing bigger and more intense fires. And this will only get much worse as the planet heats up from the use of ever larger amounts of fossil fuels, scientists warned last week at the end of a major science meeting in Vancouver.
ADVERTISEMENT ADVERTISEMENT