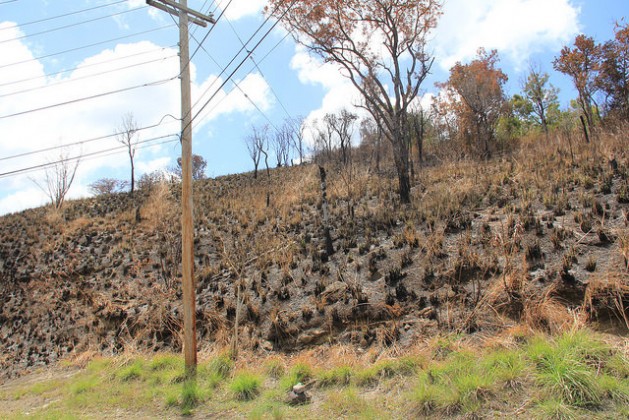 The aftermath of a bushfire in southern St. Vincent. Credit: Kenton X. Chance/IPS

KINGSTOWN, May 14 2015 (IPS) - For 32 years, Joel Poyer, a forest technician, has been tending to the forest of St. Vincent and the Grenadines.

His job allows him a unique view of what is taking place in the interior of this volcanic east Caribbean nation, where the landscape mostly alternates between deep gorges and high mountains.

"Sometimes we hardly see any fish along the coastline, because there are no trees to cool the water for the algae to get food.” -- Joel Poyer

Poyer, a 54-year-old social and political activist and trade unionist, is hoping that during the 18 months before he retires, he can get the government and people of St. Vincent and the Grenadines to focus on how human activities on the nation’s beaches and in its forests are exacerbating the impacts of climate change.

“Right now, it’s like a cancer eating [us] from the inside,” he tells IPS of the actions of persons, many of them illegal marijuana growers, who clear large swaths of land for farming – then abandon them after a few years and start the cycle again.

Over the past few years, extreme weather events have shown the people of St. Vincent and the Grenadines how activities happening out of sight in the forest can have a devastating impact on coastal and other residential areas.

Three extreme weather events since 2010 have left total losses and damages of 222 million dollars, about 60 per cent of the country’s gross domestic product.

In October 2010, Hurricane Tomas left 24 million dollars in damage, including damage to 1,200 homes that sent scores of persons into emergency shelters.

The hurricane also devastated many farms, including the destruction of 98 per cent almost all of the nation’s banana and plantain trees, cash crops for many families.

In April 2011, heavy rains resulted in landslides and caused rivers to overflow their banks and damage some 60 houses in Georgetown on St. Vincent’s northeastern coast.

In addition to the fact that the extreme weather event occurred during the traditional dry season and left 32 million dollars worth of damage, Vincentians were surprised by the number of logs that the raging waters deposited into the town. 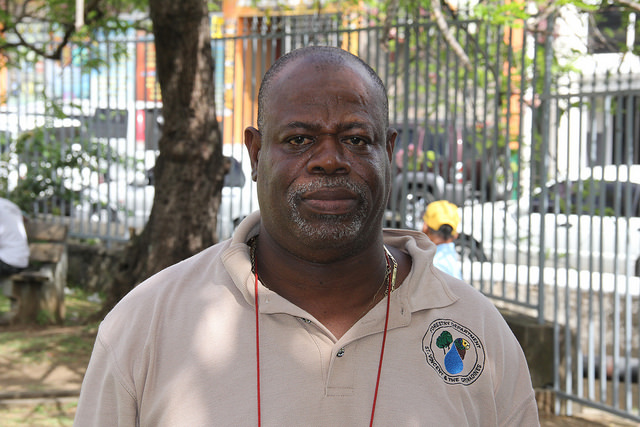 Forest Technician Joel Poyer says residents of St. Vincent and the Grenadines must play closer attention to how their own actions are exacerbating the effects of climate change. Credit: Kenton X. Chance/IPS

Again, residents were surprised by the number of logs that floodwaters had deposited into towns and villages and the ways in which these logs became battering rams, damaging or destroying houses and public infrastructure.

Not many of the trees, however, were freshly uprooted. They were either dry whole tree trunks or neatly cut logs.

“We have to pay attention to what is happening in the forest,” Prime Minister Ralph Gonsalves told the media after the extreme weather event of December 2013.

“If we are seeing these logs in the lower end, you can imagine the damage in the upper end,” he said, adding that the Christmas Eve floods had damaged about 10 per cent of the nation’s forest.

“And if those logs are not cleared, and if we don’t deal properly with the river defences in the upper areas of the river, we have a time bomb, a ticking time bomb, because when the rains come again heavily, they will simply wash down what is in the pipeline, so to speak, in addition to new material that is to come,” Gonsalves said.

Almost one and a half years after the Christmas disaster, Gonsalves tells IPS a lot of clearing has been taking place in the forest.

“And I’ll tell you, the job which is required to be done is immense,” he says, adding that there is also a challenge of persons dumping garbage into rivers and streams, although the government collects garbage in every community across the country.

The scope of deforestation in St. Vincent and the Grenadines is extensive. In some instances, persons clear up to 10 acres of forest for marijuana cultivation at elevations of over 3,000 feet above sea level, Poyer tells IPS.

“Some of them may cultivate using a method that is compatible, whereby they may leave trees in strategic areas to help to hold the soil together and attract rain. Other will just clear everything, as much as five to ten acres at one time for marijuana,” he explains.

But farmers growing legal produce, such as vegetables and root crops, also use practices that make the soils more susceptible to erosion at a time when the nation is witnessing longer, drier periods and shorter spells of more intense rainfall.

Many farmers use the slash and burn method, which purges the land of many of its nutrients and causes the soil to become loose. Farmers will then turn to fertilisers, which increases production costs.

“When they realise that it is costing them more for input, they will abandon those lands. In abandoning these lands, these lands being left bare, you have erosion taking place. You may have gully erosion, landslides,” Poyer tells IPS. 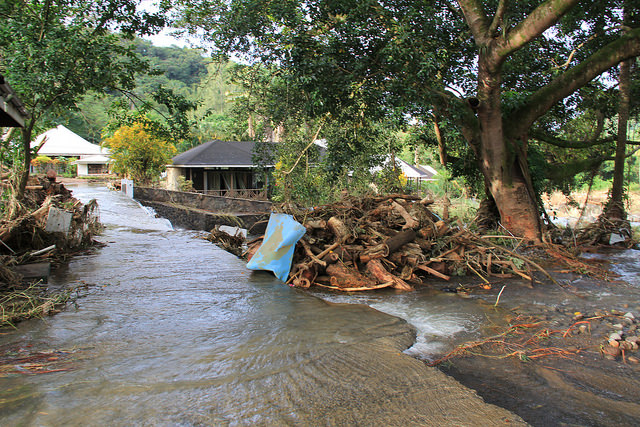 He says that sometime access to these lands is so difficult that reforestation is very costly.

As climate change continues to affect the Caribbean, countries of the eastern Caribbean are seeing longer dry spells and more droughts, as is the case currently, which has led to a shortage of drinking water in some countries.

Emergency management officials in St. Vincent and the Grenadines have warned that the rainy season is expected to begin in July, at least four weeks later than is usually the case. Similar warnings have been issued across the region.

This makes conditions rife for bush fires in a country where the entire coastline is a fire zone because of the type of vegetation.

The nation’s fire chief, Superintendent of Police Isaiah Browne, tells IPS that this year fire-fighters have responded to 32 bush fires, compared to 91 in all of 2014.

In May alone, they have responded to 20 bush fires – many of them caused by persons clearing land for agriculture.

Poyer tells IPS that in addition to the type of vegetation along the coast, a lot of trees in those areas have been removed to make way for housing and other developments.

“And that also has an impact on the aquatic life,” he says. “That is why sometimes we hardly see any fish along the coastline, because there are no trees to cool the water for the algae to get food.”

Poyer’s comments echo a warning by Susan Singh-Renton, deputy executive director of the Caribbean Regional Fisheries Mechanism, who says that as the temperature of the Caribbean Sea rises, species of fish found in the region, important proteins sources, may move further northward.

The effects of bush fires, combined with the severe weather resulting from climate change, have had catastrophic results in St. Vincent. 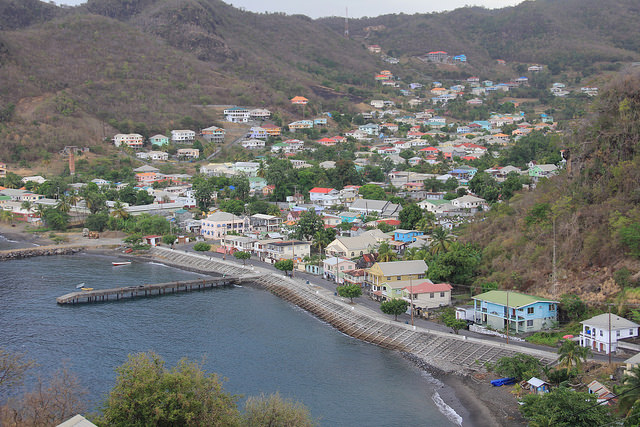 Rising sea levels haves resulted in the relocation of houses and erection of this sea defence in Layou, a town in southwestern St. Vincent. Credit: Kenton X. Chance/IPS

Among the 12 persons who died in the Christmas 2013 floods and landslides were five members of a household in Rose Bank, in north-western St. Vincent, who died when a landslide slammed into their home.

“The three specific areas in Rose Bank where landslides occurred in in the 2013 floods were three of the areas where fires were always being lit,” Community activist Kennard King tells IPS, adding that there were no farms on those hillsides.

“It did affect the soil because as the bush was being burnt out, the soil did get loose, so that when the flood came, those areas were the areas that had the landslide,” says King, who is president of the Rose Bank Development Association.

As temperatures soar and rainfall decreases, the actions of Vincentians along the banks of streams and rivers are resulting in less fresh water in the nation’s waterways.

“The drying out of streams in the dry season is also a result of what is taking place in the hills, in the middle basin and along the stream banks,” Poyer tells IPS.

“Once you remove the vegetation, then you open it up to the sun and the elements that will draw out a lot of the water, causing it to vaporise and some of the rivers become seasonal,” he explains.

St. Vincent and the Grenadines has had to spend millions of dollars to protect coastal areas and relocate persons affected by rising sea, as was the case in Layou, a town on the south-western coast, where boardwalk knows stands where house once stood for generations.

Stina Herberg, principal of Richmond Vale Academy in north-western St. Vincent has seen the impact of climate change on the land- and seascape since she arrived in St. Vincent in 2007.

“Since I came here in 2007, I have seen a very big part of our coastline disappear. … The road used to go along the beach, but at a point we had really bad weather and that whole road disappeared. So we got like five metres knocked off our beach. So that was a first warning sign,” she tells IPS.

Richmond Vale Academy runs a Climate Compliance Conference, where new students join for up to six months and take part in a 10-year project to help the people in St. Vincent adapt to the challenges of global warming and climate change.

“We had trough system on the 24th December 2013, and that a took a big bite out of our football field. Maybe 10 per cent, 15 per cent of that football field was just gone in the trough system. … We have been observing this, starting to plant tree, getting more climate conscious, living the disasters through,” she says.

The academy recently joined with the Police Cooperative Credit Union to plant 100 trees at Richmond Beach, which has been severely impacted by climate change.

“They will prevent erosion, they will look more beautiful, they will motivate and mobilise people that they can see yes we can do something,” Herberg tells IPS.