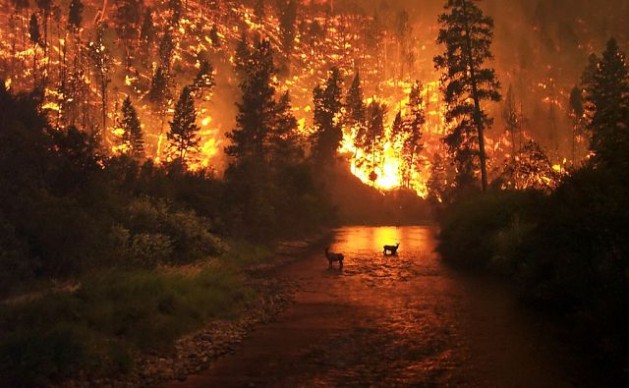 If achieved, which appears uncertain at present, the agreement aimed at addressing global warming would begin to take effect some time in the future. In the meantime, local communities are being forced to deal with the consequences of global warming, such as the increasing incidence of wildfires.

The challenges of catastrophic wildfires are certainly daunting and can be overwhelming as recently witnessed in California, South Australia and Indonesia.

As a result of the world’s warming the frequency and duration of large wildfires and the area burned have been increasing. Longer fire seasons, warmer temperatures, which are conducive to widespread insect infestations killing more trees, and drier conditions, including more droughts, are contributing to more severe wildfire risks and growing worries for local communities.

Worldwide it is estimated that somewhere between 75 million and 820 million hectares of land burn each year. The Intergovernmental Panel on Climate Change states that “climate variability is often the dominant factor affecting large wildfires” despite widespread management practices aimed at reducing flammable materials in forests.

Various climate models are forecasting higher temperatures and longer droughts, which in turn are expected to increase wildfire frequency. While more rainfall in some areas might reduce fire frequency, it may also foster more forest vegetation that provides more fuel for wildfires. Lightning strikes, often an ignition source for wildfires, are also expected to increase with global warming.

The challenges of catastrophic wildfires are certainly daunting and can be overwhelming as recently witnessed in California, South Australia and Indonesia. The costs of wildfires in terms of risks to human life and property damage are enormous and are expected to increase substantially in the coming years.

Wildfires also have serious environmental and health consequences. In addition to threats to humans and wildlife, wildfires contribute to local air pollution, which exacerbate lung diseases, and cause breathing problems even in healthy individuals.

Most wealthy industrialised nations have developed mechanisms and organisations and allocated human and financial resources to combat wildfires and mitigate their devastating consequences. Less developed countries, in contrast, often lack the resources and governmental organisations to tackle wildfires and handle their effects.

As might be expected, people’s vulnerability to global warming varies greatly by region, wealth and access to alternatives. Some less developed nations, in particular small island nations and low-lying territories, are especially vulnerable to the effects of climate change. These nations are seeking mitigation monies from the wealthy, industrialised countries to help them adapt to the impending catastrophes from climate change.

Based on the available statistical evidence, the overwhelming majority of scientists have concluded that climate change is due to greenhouse-gas emissions. Some powerful voices, however, are in denial, disputing the causes of global warming often because of self-interest, resistance to change and fear of governmental and outside interventions and regulations.

Local communities, however, do not have the luxury of debating the causes and consequences of climate change. Communities are forced to deal with the consequences of global warming, such as increasing wildfires, rising sea levels, droughts, etc.

With a possible global agreement on climate change now being debated and negotiated by major world powers, one small community in the Bahamas decided that they needed to do something about the increased threat of large wildfires to life and property due to global warming.

On a plot of land leased from the Bahamian government, the community of Bahama Palm Shores consisting of some 100 households located in the Abacos Island financed and built their own firehouse.

The homeowners -men and women and young and old- donated their time, labour and limited financial resources to build their local firehouse. They were also able to collect 12,000 dollars in donations to purchase a used 1985 fire truck from Lawrenceburg, Tennessee.

In addition to an occasional bingo night, the community has organised a 30-mile Bike-a-Thon on Valentine’s Weekend of about three dozen riders to raise funds to maintain the firehouse and fire truck as well as support volunteer fire services.

Many communities recognise the need to organise and work together to ensure that local climate change adaptation measures are effective. Non-governmental organisations, especially environmental groups, are also encouraging and supporting citizens at various levels to due their part to reduce the impact of climate change.

However, the only long-term solution to global warming is a legally binding and international agreement on climate among all nations of the world, which is the overall objective of the U.N. Climate Change Conference in December.

As witnessed at the recent U.N. Summit on Climate Change held in New York City, heads of state and government officials often announce impressive actions and ambitious goals intended to avert the worst consequences of global warming as well as address the vocal concerns of activist environmental groups. When it comes to adopting coordinated action at the global level for nearly 200 countries, things become enormously more complex and difficult.

Some observers consider the chances of achieving an international, binding climate agreement by the year’s end to be slim. They see powerful factors, including the industrial complexes reliance on fossil fuels, economic and business interests, and short-term, parochial nation-state interests, undermining the chances for an agreement.

In addition, even if an international climate convention were to be reached, they contend that it would be almost impossible to enforce.

Others, however, believe that a global climate convention is not only possible, but that it may lead to payoffs that will have meaningful impacts on confronting climate change. Not only will an international agreement buttress the abilities of individual nations to address climate change, it will also send a clear message to businesses and guide investments toward low carbon emission outcomes.

While communities around the world wait hopefully for the outcome of the U.N. Climate Change Conference to kick in, they have little choice but to do the best they can to deal with the consequences of global warming, including more bike-a-thons, bingo games and other fund raising events.