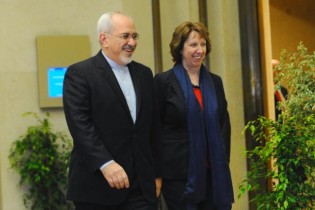 By Gareth Porter
Russian Foreign Minister Sergey Lavrov revealed a crucial detail Thursday about last week's nuclear talks with Iran in Geneva that explains much more clearly than previous reports why the meeting broke up without agreement.

By Jasmin Ramsey
Despite rising hopes amid an unexpected turn of events, negotiations here between Iran and six world powers have ended without an agreement over Tehran’s nuclear programme.

By Jasmin Ramsey
Raising expectations for a deal over its controversial nuclear programme, Iran’s chief negotiator Mohammad Javad Zarif has said that a joint statement on the framework of a nuclear deal could be issued as early as Friday here amid ongoing negotiations with the P5+1 group of world powers.

By Jasmin Ramsey
Talks between Iran and world powers known as the P5+1 over Iran’s nuclear programme wrapped up here Wednesday with expressions of encouragement and hope, a commitment to reconvene in just three weeks, and several welcomed “firsts”.

By Jasmin Ramsey
Iran offered a new proposal in much-anticipated talks over its nuclear programme here Tuesday in a meeting with the P5+1 negotiating team comprising the United States, Britain, France, Russia and China, plus Germany.

By Jasmin Ramsey
Even with potential U.S. strikes against Iranian ally Syria looming, Washington and Tehran appear to be preparing for the resumption of nuclear talks.
ADVERTISEMENT ADVERTISEMENT