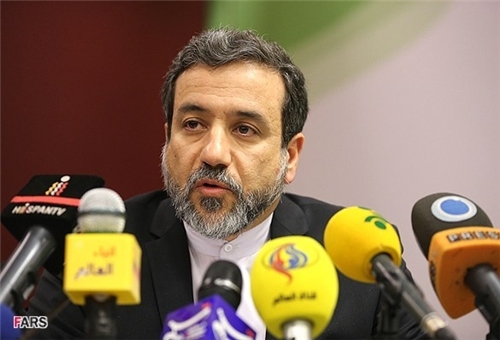 GENEVA, Oct 17 2013 (IPS) - Talks between Iran and world powers known as the P5+1 over Iran’s nuclear programme wrapped up here Wednesday with expressions of encouragement and hope, a commitment to reconvene in just three weeks, and several welcomed “firsts”.

“The Additional Protocol is a part of the endgame." -- Deputy Foreign Minister Abbas Aragchi

However, one key element of a potential deal – Iran’s eventual willingness to sign the Additional Protocol of the International Atomic Energy Agency (IAEA) — was revealed to IPS earlier in the day.

“The Additional Protocol is a part of the endgame,” Araghchi told IPS this morning in the lobby of his hotel. “It’s on the table, but not for the time being, it’s a part of the final step,” he said.

The voluntary but advanced nuclear safeguards standard, which Iran would formally ratify with the IAEA, has long been considered by analysts a key element of any possible deal between Iran and the P5+1 over its controversial nuclear programme.

“The Additional Protocol is the only way that you can make sure there are no clandestine activities inside the country,” Ali Vaez, an Iran expert at the International Crisis Group, told IPS.

“It gives the IAEA access to all parts of the nuclear fuel cycle. It will be able to conduct snap inspections with two hours’ notice for declared facilities in Iran and within 24 hours of undeclared facilities,” he said.

According to Iran expert Trita Parsi, Iran started implementing the Protocol in 2003 as part of a negotiation with the so-called EU-3 (Britain, France, and Germany) while under the impression that “objective criteria would be put into place for Iran to have a nuclear enrichment programme.”

But the EU-3 failed to follow through, reportedly due in major part to strong objections to such an accord by the administration of President George W. Bush, and Iran stopped adhering to the Protocol in 2006.

“Europe had already achieved what it sought, Iran wasn’t enriching, and the Protocol was implemented,” Parsi told IPS.

“This is part of the reason why the Iranians want the end game to be clarified before,” he said.

Hints of a potential deal

“I have never had such intense, detailed, straightforward, candid conversations with the Iranian delegation before,” a senior U.S. administration official told reporters here, confirming that the next talks would take place again in Geneva from Nov. 7-8.

“I would say we are beginning that kind of negotiation to get to a place where, in fact, one can imagine that you could possibly have an agreement,” the official said.

Zarif, who is suffering from extreme back pain, told reporters early Wednesday evening in an English/Persian press conference that Iran had taken part in “substantive and forward-looking negotiations.”

“We sense that the members of the [P5+1] also exhibited the necessary political will in order to move the process forward, and now we have to get to the details,” a wheelchair-ridden Zarif said in English after the final plenary had ended.

The closed-door bilateral meeting on Oct. 15 between the lead US representative here, Under Secretary of State for Political Affairs Wendy Sherman, with Iran’s Deputy Foreign Minister Abbas Aragchi was the first such meet to take place between the US and Iran during a full-gauged P5+1 negotiation with Iran since 2009, although the US and Iran made history last month when Secretary of State John Kerry and Zarif met privately for 30 minutes on the sidelines of the UN General Assembly.

“Our discussion bilaterally yesterday was a useful one,” said a senior U.S. official Wednesday.

The fact that the talks were conducted in English for the first time was seen as another welcome first.

“The pace of the discussion is much better,” a senior U.S. official told reporters, adding that it “creates the ability to really have the kind of back-and-forth one must have if you want to have a negotiation.”

Before insisting that he would not comment on any details of his proposal, Zarif told reporters Iran would not implement the Additional Protocol at this stage, adding “these issues are on the table” and “are being discussed and they will be discussed at various stages of the process.”

“We want to guarantee Iran’s right to nuclear technology and assure the other side of the table that our nuclear programme is peaceful,” Araghchi told reporters in Farsi Tuesday.

“The first step includes rebuilding mutual trust and addressing the concerns of both sides,” he said, adding that the “verification tools” of the IAEA could be utilised during the process.

“Iran will use its own nuclear facilities, including its nuclear research reactor, for peaceful purposes,” he noted, adding that the last phase of Tehran’s offer includes “the lifting of all sanctions against Iran.”

In another first for the P5+1 talks, a “joint statement” issued in the names of both Zarif and EU High Representative Catherine Ashton noted that sanctions specialists would be included in an “experts” meeting before the Nov. 7-8 talks “to address differences and address practical steps.” In yet another first, top U.S. sanctions officials accompanied Sherman on the delegation this week.

But it remains to be seen what kind – as well as the timing — of sanctions relief the P5+1 is willing to offer Iran as part of a comprehensive agreement that is likely to include interim confidence-building measures (CBMs).

Iran’s insistence that its right to enrich uranium on its own soil as part of its civil nuclear programme must be included in any eventual deal remains a problem for the U.S. Congress where the Israel lobby exerts its greatest influence.

Israeli Prime Minister Benjamin Netanyahu has been campaigning for weeks against any agreement that does not require Iran to essentially abandon its nuclear programme, including enrichment on its own soil.

An Oct. 11 bipartisan letter sent to U.S. President Barack Obama by 10 key senators suggested they were “prepared to move forward with new sanctions to increase pressure on the government in Tehran” in the coming weeks, presumably before the next round of talks in Geneva.

The senior U.S. official who briefed reporters after the meeting said there would classified briefings with Congress on the talks in the coming days.

“The prerogative in the end is theirs, but I am hopeful that we will continue to be strong partners with the same objective, which I believe we have,” said the official.

The official said briefings will also be given to key allies, including Israel and Saudi Arabia, which are known to be highly sceptical about – if not strongly opposed – to any deal that would permit Iran to continue any enrichment on its own soil.