BOOKS: Containing Iran Is the “Least Bad Policy” for U.S.

WASHINGTON, Oct 14 2013 (IPS) - The day that the much-heralded new round of nuclear talks between Iran and the P5+1 world powers opens might seem like the wrong day to pick up Unthinkable, Kenneth Pollack’s new exploration of what to do if talks fail. 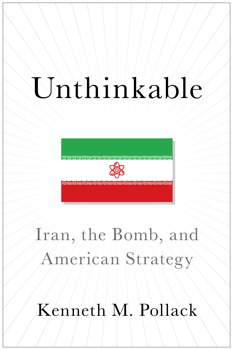 After all, the Iranian side talked almost giddily on Saturday about setting a road map by Wednesday for an agreement that would freeze Iran’s nuclear programme and subject it to inspection in exchange for the lifting of sanctions.

More than a few in Washington — Pollack, who says a negotiated outcome along those lines is the best possible outcome, among them — will be hoping that this week’s talks begin to move toward making Pollack’s thesis irrelevant.

Pollack’s central point is this: negotiations have failed before and are likely to do so again. The lure of regime change is also likely to continue to disappoint. This leaves Western policymakers two options: a military attack on Iran or a policy of containment.

Pollack explores all four options, and Western policymakers’ and analysts’ views of the pros and cons at length to reach his conclusion: all options are bad, but containment is more likely to produce less bad results for U.S. interests, and thus is to be preferred.

Between the clashing interests, painful history, and forces on both sides that do not favour agreement, it seems all too likely that the data and arguments Pollack marshals will be needed along the way. For whatever happens in Geneva this week, it is likely to be the barest beginning of a process that must play out primarily in the internal politics of both societies.

Thus the book’s chief weakness — that it fails to explore much that might happen outside Washington’s interests defined as they have been for the last several decades, or why they are defined that way — is also its strength. Pollack’s sense of the Beltway milieu combines the anthropologist and the bureaucrat, making the book an almost encyclopedic reference of any claim you are likely to hear about the US’ Iran policy.

Most, in fact, are presented more lucidly by Pollack than by their own champions. For that reason alone, the book deserves to be widely read, and will improve the quality of debate if it is.

Like his 2001 book The Threatening Storm: The Case For Invading Iraq, Unthinkable is perfectly timed to condense and crystallise a Washington policy debate. Like its predecessor, Unthinkable seeks to shift the terms of debate by layering a counter-intuitive argument over densely-argued, fact-heavy analysis, in the style of the CIA analyst Pollack once was.

He presents an excellent, thorough and readable summary of U.S. concerns, priorities and policy options for preventing Iran’s nuclear programme from threatening U.S. interests or compromising U.S. freedom of action. He works unusually hard to both acknowledge and present even-handedly the favourite concerns of various ideological factions in Washington; he references enough past U.S. misdeeds to keep the left engaged and enough Iranian aggressions to hold the right’s attention.

One other aspect of this volume makes it highly unusual for a product of the think-tank industrial complex (to which, full disclosure, this reviewer also belongs). It is the use, over and over again, of the words “humility” and “uncertainty.”

The phrase “limited U.S. knowledge of Iran” has 11 entries in the index. “U.S. invasion of Iraq” has 22 — of which at least one-third are Pollack noting things that the U.S. intelligence community, decision-makers, and he personally got wrong in the run-up to that war. He explores, again and again, what it would mean if Western intelligence were to be similarly mistaken about Iran — either seeing a full weapons programme where none existed or missing a dash for a bomb until it was too late to do anything but respond to one’s existence.

Readers who have sought this kind of accountability and acknowledgement in U.S. planning since the Iraq debacle should seek out this book. Yet they will not like all of what they find. No readers will, for even as Pollack faithfully considers all sides’ orthodoxies on Iran he pokes holes in… most of them.

On negotiations: “There is real reason to doubt that its government will make meaningful compromises on its nuclear programme despite the painful impact of the sanctions.”

On sanctions:  “The problem is that, historically, sanctions don’t work that way.”

On an Israeli strike: “Israel does not have a good military option. And that is why it would be better for everyone – Israel, the United States, the rest of the world, maybe even the Iranian people, too – if Israel were not to attack Iran.”

On a U.S. strike: “We could end up paying all of those costs and risks without getting any of the advantages.”

On containment: “I expect that a nuclear Iran would become more aggressive in its support for terrorism, insurgents, and other subversive groups.”

His dispassionate tone breaks down, however, in his flirtation with a regime change strategy. A book of 400 pages devotes barely three to the dangers and difficulties of regime change.

Pollack explores the difficulty in making the case that military action against Iran would be legal under international law, but fails to mention that regime change is also proscribed except under the most extreme circumstances. Nor does Pollack consider at much length which Iranian interests and behaviours could be expected to change with the regime, and which of those will not.

A more secular Iranian regime might still seek regional hegemony and nuclear weapons and fight against Sunnis across the region, for example.

Pollack gets out from under his dilemma by saying that his prescription is only that Washington should seriously explore the possibility of regime change. Intellectually, this is a bit of a cop-out; practically, however, in the Beltway milieu for which this book was written it is a strength. Pollack cannot be accused of being a dove.

That a serious analyst with a yearning to remake societies by force would look at the Iran case and conclude that ultimately, realpolitik, negotiations and if necessary, containment are the better choices ought to give pause to the broad swath of Washington that talks glibly about what options are “off the table” and what are “on” it.

Heather Hurlburt is a Senior Advisor at the National Security Network. She served on Capitol Hill as a speechwriter to President Bill Clinton, and a speechwriter and member of the State Department’s Policy Planning staff.