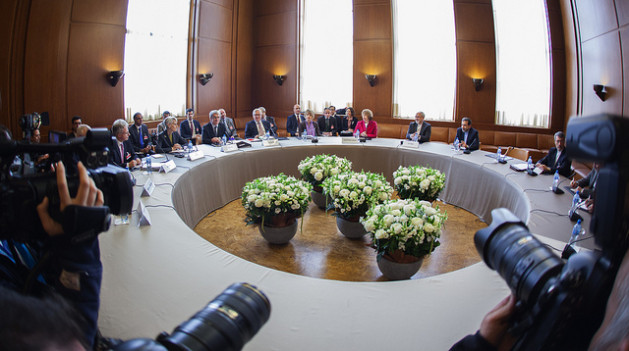 GENEVA, Nov 10 2013 (IPS) - Despite rising hopes amid an unexpected turn of events, negotiations here between Iran and six world powers have ended without an agreement over Tehran’s nuclear programme.

Iran’s Foreign Minister Mohammad Javad Zarif and EU Foreign Policy Chief Catherine Ashton said Saturday that they would reconvene with the representatives of the P5+1 (Britain, China, Russia, France and the United States plus Germany) on Nov. 20.

“A lot of concrete progress has been achieved but some differences remain,” said Ashton and Zarif in a joint statement after a meeting that included all the P5+1′s foreign ministers apart from China, which sent its vice minister.

“Obviously the six countries may have differences of views, but we are working together. Hopefully we will be able to reach an agreement when we meet again,” a smiling Zarif told reporters in the early morning hours of Sunday.

U.S. Secretary of State John Kerry — who has spent many hours with his Iranian counterpart here since his unexpected arrival on Nov. 8 after a brief stop in Tel Aviv — was optimistic at his lone press conference following the Iran/EU presser.

“There’s no question in my mind that we are closer now, as we leave Geneva, than when we came,” said Kerry.

“The negotiations were conducted with mutual respect, they were very serious,” said Kerry, adding: “it takes time to build confidence between countries that have really been at odds for a long time now.”

While emphasising that the United States would not allow Iran to build a nuclear weapon and would retain all options in doing so, Kerry also described “forceful diplomacy as a powerful enough weapon to actually be able to defuse the world’s most threatening weapons of mass destruction.”

While diplomats involved in negotiations over Iran’s controversial nuclear programme here have been mostly tight-lipped about the details of their meetings, France’s Foreign Minister Laurent Fabius — who was reportedly the first to announce that the talks had ended without an agreement — expressed some concerns earlier in the day.

Stating that he is interested in an agreement that is “serious and credible”, Fabius argued that the “initial text made progress but not enough” during an interview with France Inter radio on the morning of Nov. 9.

According to François Nicoullaud, France’s former ambassador to Tehran (2001–05), the French position on Iran’s nuclear programme has not changed since François Hollande replaced Nicolas Sarkozy on May 12 as president.

“We have a kind of continuity in the French administration where the people who advised Mr. Sarkozy are the same ones who advise the current administration,” the veteran French diplomat told IPS, adding that France’s relations with Iran were more positive during the Jacques Chirac administration.

“This is especially true for the Iranian nuclear case because it’s very technical and complex and the government really needs to be convinced before it changes its position,” he said.

Countering the rising notion that France had played a role in delaying a deal, Zarif, Ashton and Kerry expressed gratitude for all the foreign ministers’ contributions to the negotiations.

Kerry said the prevailing secrecy maintained by the P5+1 was a sign of the “seriousness that is taking place” and cautioned against “jumping to conclusions.”

Shortly before Zarif had warned against conspiracy theories and reiterated that differences of opinion are normal in such situations while briefing Iranian press, according to the Shargh Daily reformist newspaper.

Speculation that France had postponed a deal arose after Fabius publicly expressed concerns early on Nov. 9 over Iran’s enrichment of 20-percent grade uranium and its Arak facility, which is not yet fully operational.

Daryl Kimball, the head of the Arms Control Association, says the Arak facility “is more than a year from being completed; it would have to be fully operational for a year to produce spent fuel that could be used to extract plutonium.”

“Iran does not have a reprocessing plant for plutonium separation; and Arak would be under IAEA safeguards the whole time,” he noted in comments printed in the Guardian.

“The Arak Reactor certainly presents a proliferation problem, but there is nothing urgent,” said Nicoullaud, a veteran diplomat who has previously authored analyses of Iran’s nuclear activities.

“The best solution would be to transform it before completion into a light-water research reactor, which would create less problems,” he said, adding: “This is perfectly feasible, with help from the outside.”

“Have we tried to sell this solution to the Iranians? I do not know,” said Nicoullaud.

While diplomats involved in the talks have provided few details to the media, it’s now become clear that the approximately six-hour meeting on Nov. 8 between Kerry, Zarif and Ashton involved the consideration of a draft agreement presented by the Iranians.

That meeting contributed to hopes that a document would soon be signed until the early morning hours of Nov. 9, when the LA Times reported that after reaching a critical stage, the negotiators were facing obstacles.

“There has been some progress, but there is still a gap,” Zarif told reporters on Saturday afternoon, according to the Fars News Agency.

“We have an attitude and the French have theirs,” said Zarif in comments posted in Persian on the Iranian Student News Agency.

In an exclusive Nov. 7 interview with IPS News, Zarif laid out Iran’s bottom lines in these negotiations.