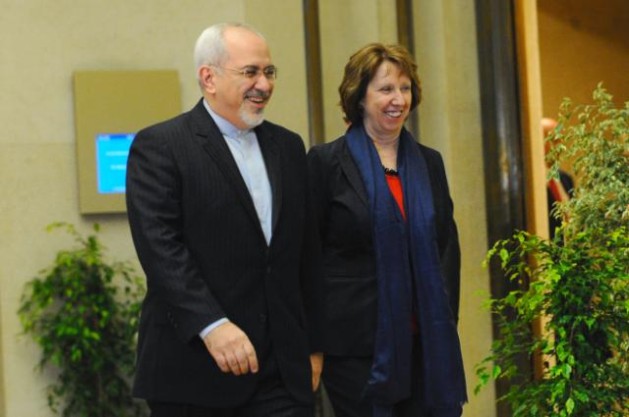 WASHINGTON, Nov 25 2013 (IPS) - The devil is in the details. This cliché is already being invoked regarding the deal concluded this past weekend between Iran and the so-called P5+1 – the permanent members of the U.N. Security Council, plus Germany, along with the European Union’s High Representative, Baroness Catherine Ashton.

Devil and details, yes; but the “angel” is in the “big picture,” the fact of the agreement itself – interim, certainly; flawed, perhaps; but a basic break with the past.

This is the end of the Cold War with Iran, (accurately) defined as a state when it is not possible to distinguish between what is negotiable and what is not.

It will now become much harder for Iran to get the bomb, even if it were hell-bent on doing so. The risk of war has plummeted. Israel is safer – along with the rest of the region and the world — even as Prime Minister Benyamin Netanyahu denies that fact.

This is the end of the Cold War with Iran, (accurately) defined as a state when it is not possible to distinguish between what is negotiable and what is not. Going back to that parlous state would require a major act of Iranian bad faith, perfidy, or aggression, not at all in its self-interest.

In the last few days, the Middle East has become different from what it was before. That happened, as a “moment in history,” when President Barack Obama called Iran’s president, Hassan Rouhani, on the latter’s way to Kennedy Airport.

That moment psychologically set in train a sequence of events that are causing an earthquake in the region. And like any good earthquake, the extent, the impact, and even the direction it travels will not soon be clear. But one thing is clear: despite down-side risks, changes taking place can be positive if people in power will make it so.

The struggle with Iran has never been just about the “bomb.” Even aside from whether Iran’s domestic nuclear energy programme would ineluctably morph into a nuclear weapons capability, it has posed problems ever since the Islamic Revolution of 1979.

Iran turned from being a supporter of Western, especially U.S., interests – a so-called “regional influential” – to being a challenger of U.S. hegemony, the predominance of Sunnis over Shiites in the heart of the Middle East, and the comfort level of close U.S. regional partners.

The United States led in devising a policy to contain Iran. It included diplomatic isolation, the introduction of economic sanctions, Washington’s support for Saddam Hussein’s Iraq in its war against Iran, and U.S. buttressing of the military security of its regional partners.

There have also been widespread reports of external efforts to destabilise Iran, along with a U.S. predilection for regime change.

Why Iran has now decided to negotiate seriously about its nuclear programme will be long debated and be variously ascribed to economic sanctions; to progressive loss of popular support for the mullah-led regime and a “mellowing” of ideology; and to the election of an Iranian president with an agenda different from his predecessor and blessed by the Supreme Leader.

Current possibilities are helped by a U.S. administration prepared to negotiate seriously, unlike its two predecessors, from when Iran a decade ago put a positive offer on the table that went unanswered – as Secretary of State John Kerry noted Saturday night.

At heart, Iran is now back “in play” in the region and is beginning the march toward resuming a role in the international community – slow perhaps, abortive perhaps, but for now pointed in that direction.

Assuming that the issue of Iran’s nuclear programme can be dealt with successfully, that is clearly in the U.S. interest. It might lead toward renewed U.S.-Iranian cooperation, tacit or explicit, over Afghanistan, where complementary interests led Iran to support the U.S. overthrow of the Taliban regime in 2001. It is also possible that Iran will come to value stability in Iraq over the pursuit of major influence there.

It is still a stretch to see Iran’s working to reconcile with Israel (a quasi-ally before 1979), although Iran’s full reengagement in the outside world and especially in relations with the United States can never be completed without Iran’s reaching out to Israel (and vice versa).

And for Iran to change its posture toward Syria and Hezbollah in Lebanon would require not just alteration of Iran’s ambitions but also changes in policies by other states and groups.

Syria is both symbol and substance of the core problem of Iran’s re-emerging as a serious player in the Middle East. There is the slow-burning civil war between Sunnis and Shias that was reignited by the Iranian Revolution and then, when that fire began to die down, by the U.S.-led invasion of Iraq, which overthrew a Sunni minority government dominating a majority Shia population.

The war in Syria is in part an effort by Sunni states to “right the balance.” In the process, however, Saudi Arabia in particular has been unwilling to control elements in its country that are both inspiring and arming the worst elements of Islamist extremism and which fuel not just Al-Qaeda and its ilk but also the Taliban.

There is also state-centred competition for influence in the Middle East – geopolitics. This is linked to the relationships of regional states, especially Saudi Arabia and Israel, with the United States. Both stoutly oppose Iran’s reentry into that competition.

In addition to its continuing worries about an Iranian bomb, Israel is concerned that lessened tensions with Iran could swing attention back to the Israeli-Palestinian conflict.

But Saudi Arabia faces no potential military threat from Iran. Any Iranian challenge is denominated in terms of Sunni vs. Shia, cultural and economic penetration, and the greater vibrancy of Iranian society – none of which can be dealt with by the huge quantities of armaments these countries have accumulated.

Further, as Iran does again become a player, uncertainties regarding its potential challenges to neighbours will lead them cleave even more closely to the United States; and the U.S. will have to continue being a critical strategic presence in the region – its desire to “pivot” to East Asia notwithstanding.

It is thus not surprising that several regional states oppose the U.S.-led opening to Iran and have already signaled a no-holds-barred campaign, including in U.S. domestic politics, if not to scuttle what has been achieved so far at least to limit US (and P5+1) negotiating flexibility. (Iranian hard-liners will also be working to undercut President Rouhani.)

Israel and others can rightly ask that the U.S. not fall for a “sucker’s deal,” though, as Secretary Kerry correctly stated, “We are not blind, and I don’t think we’re stupid.”

But they are also worried that they will lose their long-unchallenged preeminence in Washington and with Western business interests. This is not Washington’s problem. Indeed, from Afghanistan to Iraq to Syria and even to Israeli-Palestinian relations, drawing Iran constructively into the outside world – if that can be done safely – is very much in U.S. interests.

Even at this early stage in moving beyond cold war with Iran, President Obama has earned his Nobel Peace Prize.

Robert E. Hunter, former U.S. ambassador to NATO, was director of Middle East Affairs on the National Security Council Staff in the Carter Administration and in 2011-12 was Director of Transatlantic Security Studies at the National Defense University.