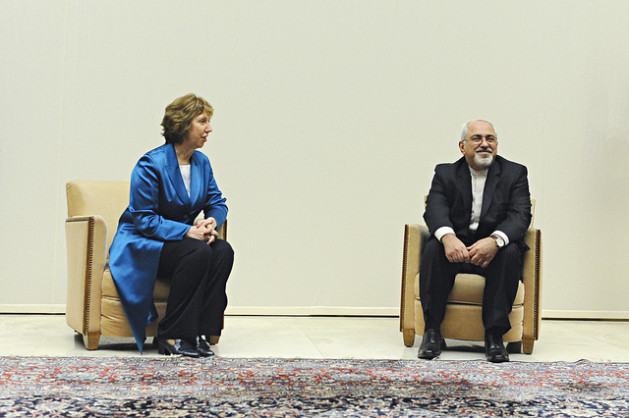 GENEVA, Oct 15 2013 (IPS) - Iran offered a new proposal in much-anticipated talks over its nuclear programme here Tuesday in a meeting with the P5+1 negotiating team comprising the United States, Britain, France, Russia and China, plus Germany.

In a closed-door morning session, Iranian Foreign Minister Mohammad Javad Zarif presented a three-phased offer to the world powers in a PowerPoint presentation titled, “Closing an Unnecessary Crisis and Opening New Horizons,” according to Iranian press reports, although no details were made public.

Inside Iran, people remain hopeful for a resolution to the international conflict over Tehran’s nuclear programme, which has resulted in several rounds of unilateral and multilateral sanctions.

Iran’s economy has suffered from a major reduction in its vital oil exports. Almost exactly one year ago, Iran’s currency, the rial, dropped to more than half its dollar value.

Maliheh Ghasem Nezhad, a 65-year-old retired teacher, told IPS she had voted for Iranian President Hassan Rouhani in June and was “very hopeful that this new team can finish this issue soon.”

“We want a conclusion that is good for us and our economy,” she said.

“No one in Iran wants nuclear bombs but we have the right to safe energy. We just want less stress in our daily lives,” Nezhad told IPS.

After years of increasing isolation and economic pressure from the U.S. and other world powers that intensified significantly during the final term of former president Mahmoud Ahmadinejad, much of Iran seems at least open to a deal with the West.

Supreme leader Ali Khamenei raised more than a few eyebrows around the world when he said he wasn’t “opposed to correct diplomatic moves” during a Sep. 17 speech to commanders of the Islamic Revolutionary Guard Corps (IRGC), according to Iranian press reports.

“I believe in what was described years ago as heroic flexibility,” he said.

But some Iranians remain sceptical about the possibility of a deal.

“I do not think they can get to an agreement because from many sides there are a lot of pressures,” Bahman Taebi, a bank employee, told IPS.

“There are countries in our region that do not want Iran and the West to get close, so they try to do everything they can to impede an agreement,” he said, adding that he believed “Mr. Zarif and his team were very capable for the talks and much better than the previous teams.”

Still, the Iranian delegation’s trip to the United Nations General Assembly, which resulted in a historic phone call between Presidents Barack Obama and Hassan Rouhani and a private meeting between Zarif and his U.S. counterpart John Kerry — the highest-level official meet between the two countries since Iran’s 1979 revolution — have left Iranians wanting more.

“All I want Dr. Zarif and his team do in Geneva is to continue with the same approach they had in New York,” Reza Sabeti, a 47-year-old employee of a private firm, told IPS.

“From what saw in New York, I guess this will be another diplomatic victory for the Rouhani government and also for the U.S. because both sides need an agreement,” he said.

Iran’s proposal has only been made available to the participating negotiating parties, but both sides concluded the day with positive statements.

Mann later reiterated his positive first take while speaking to reporters but said “there’s still a lot of work to be done.”

Iran’s FM, who has been appointed by President Rouhani to lead the Iranian nuclear negotiating team, was only present during the morning session. The talks will continue through Oct. 16th at the deputy ministerial level.

Zarif is reportedly suffering from intense back pain and was bedridden during his trip to Geneva, but did, however, manage to have a bilateral meeting with Ashton following the afternoon plenary.

A Senior State Department official said the discussion was “useful, and we look forward to continuing our discussions in tomorrow’s meetings with the full P5+1 and Iran.”

“We have explained our negotiation goals,” said Iranian Deputy Foreign Minister Abbas Araghchi in Persian to a swarming crowd of reporters before the afternoon session began.

“We want to guarantee Iran’s right to nuclear technology and assure the other side of the table that our nuclear programme is peaceful,” said the deputy FM, who will be Iran’s lead representative to the P5+1 during the remainder of the Geneva talks.

“The first step includes rebuilding mutual trust and addressing the concerns of both sides,” he said, adding that the “verification tools” of the International Atomic Energy Agency (IAEA) could be utilised during the process.

“Iran will use its own nuclear facilities including its nuclear research reactor for peaceful purposes,” he noted, adding that the last phase of Iran’s offer includes “the lifting of all sanctions against Iran.”

Roadblocks in the U.S.

But Iran’s insistence that its right to home-soil enrichment must be recognised as part of any deal remains a problem for the U.S. Congress.

The senators, including traditional hawks Sen. Robert Menendez, Sen. Lindsey Graham and Sen. Charles E. Schumer, as well as more moderate Democrats, said they “prepared to move forward with new sanctions to increase pressure on the government in Tehran.”

“The administration has to do much more hard lobbying to prevent Congress from enacting measures that could spoil the chance for a sound agreement with Iran,” Paul Pillar, a former top CIA analyst, told IPS.

“The presence of names of otherwise reasonable members of Congress on such letters is evidence of the political power of those endeavouring to subvert the negotiation of any agreement with Iran,” he said.