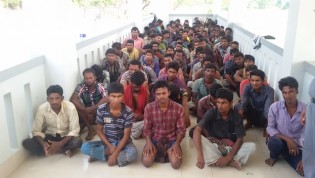 By Naimul Haq
Though he is only 16 years old, Mohammad Yasin has been through hell and back. He recently survived a hazardous journey by sea, crammed into the cargo-hold of a rudimentary boat along with 115 others.

By Ashfaq Yusufzai
With its lush valleys and well-watered plains, Pakistan’s northwestern Khyber Pakhtunkhwa (KP) province produces plenty of food for the local population, including 10 million tons of wheat every year. So why are the people of this bountiful mountainous region going hungry?

By Ashfaq Yusufzai
Muslims around the world will soon celebrate Eidul Azha, otherwise known as the ‘feast of the sacrifice’, the second most important festival day on the Islamic calendar.

By Humberto Márquez
It's a straightforward calculation: a litre of gasoline costs 62 times more in Colombia than in Venezuela, a difference that fuels smuggling and crime along the border.

UZBEKISTAN AND KYRGYZSTAN: Smugglers Own the Night

By EurasiaNet Correspondents
During the day, when Uzbek border guards patrol its streets, Mingdon is a sleepy Ferghana Valley town. But after night falls, Mingdon, a hamlet of 10,000 on Uzbekistan’s frontier with Kyrgyzstan, turns into a smugglers’ paradise.
ADVERTISEMENT ADVERTISEMENT