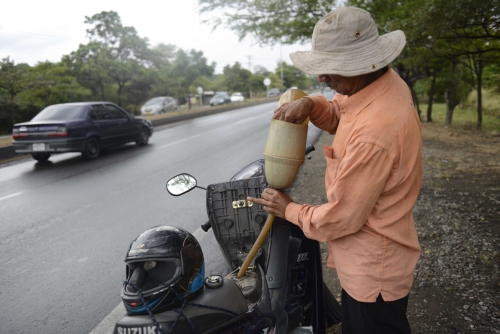 SAN CRISTÓBAL, Venezuela , Sep 26 2012 (IPS) - It’s a straightforward calculation: a litre of gasoline costs 62 times more in Colombia than in Venezuela, a difference that fuels smuggling and crime along the border.

“What I earn repairing tires is not enough, I have four kids to support,” Trino L. tells IPS as he patches a tire on the roadside in the state of Táchira in southwestern Venezuela, bordering the Colombian province of Norte de Santander.

“Repairing tires I can earn 3,000 bolívars a month (700 dollars at the official rate), while smuggling gasoline I can get two, three or four times as much, depending on what I have to pay (in bribes) along the way,” said Trino.

Táchira and Norte de Santander are crossed by the eastern branch of the Andes mountain chain which gives rise to a wealth of river valleys.

There are few road passes; the main one connects the Venezuelan city of San Antonio with Cúcuta, the capital of the Colombian province.

The Simón Bolívar international bridge can be crossed by foot, car or bicycle – no documents are required and there are few inspections. On the Colombian side, small-scale vendors of gasoline, known as “pimpineros,” peddle the fuel along the highway, without safety precautions, from small plastic containers.

“I get my gasoline from a wholesaler who brings it from Venezuela. I have no idea how, that’s not my business; there may be something illegal on the Venezuelan side but not here – there are thousands of us who make our living this way,” Luis Duque, a young pimpinero who stores thousands of litres of fuel behind a small grocery store, told IPS.

“The main thing is the price differential. The government decided to regulate retail sales of gasoline throughout Táchira, but who is regulating the wholesalers? This is the responsibility of PDVSA (the Venezuelan state oil company) and the armed forces who guard the border,” state Governor César Pérez, a Christian Democrat opponent of the national government of President Hugo Chávez, said at a press conference.

Last year the government introduced an automated system for gasoline purchases in Táchira. Authorised stations sell gasoline to vehicles carrying a bar code on their windshield, linked to a database indicating the amount assigned to each one.

But the amounts assigned by the authorities to private vehicles, taxis, passenger and freight transport are giving rise to complaints that the measure is arbitrary and discriminatory, as it only applies to Táchira.

Sonia Medina, the Táchira state government’s head of economic development, said “the regulation and rationing of gasoline has not improved our people’s quality of life, and wholesale smuggling continues. It will not cease as long as the price difference continues to be 62 to one.”

A gallon (3.8 litres) of gasoline costs the equivalent of 4.92 dollars in Colombia, compared to just eight cents in Venezuela, because of the heavy subsidies that make gasoline in this country among the cheapest in the world.

In Colombia, Cristian Buitrago, acting governor of Norte de Santiago, concurred that “the decisive factor is that Venezuelan gasoline is so much cheaper. What one side may view as contraband could also be seen as opportunity cost.”

José Miguel González, the executive head of the Cúcuta Chamber of Commerce, said “our population has a low level of education but a high level of competitiveness. The price differential allows 1,000 percent profits to be made from smuggling gasoline.”

“During Spanish colonial times, local smugglers were known as ‘cascareros’, and there has been a culture of smuggling ever since,” said Javier Sánchez, head of the governing United Socialist Party of Venezuela in Táchira. “Nowadays it is not only gasoline, but also food and medicines, subsidised in our country, that are trafficked.”

The price difference “allows those who engage in contraband to bribe whoever they need to bribe. People on the Colombian side solve a social problem, namely unemployment. We need national policies, including military vigilance, to adequately deal with Táchira as a border state,” Sánchez said.

Jesús Berro, head of the Táchira state police force, said “this is an area characterised by a great many illicit activities, including money laundering, which sustain a variety of criminal groups. There has been an increase in the number of murders by hired killers.”
The crime wave worries Luis Hernández, head of the Táchira Association of Cattle Ranchers. “Our main problem is insecurity. There are armed groups in the region that are outside the law: kidnappers, drug traffickers, and Colombian and Venezuelan guerrillas and paramilitaries,” he said.

“We have to deal with two types of crime: common crime, arising from the social breakdown in Venezuela, and border crime, arising from being adjacent to all the conflicts suffered by Colombia, and from this asymmetric economy that gives rise to criminal gangs,” said Pérez.

But in spite of the mounting problems, Táchira “has great potential as a centre for border trade, as an agricultural, livestock, agribusiness and mining (coal and phosphates) region, and as a tourist centre,” the governor added.

Across the border, in Norte de Santander, “we consider it a privilege to be on the border,” governor Buitrago said. “It brings comparative advantages even though it creates difficulties, and it is our opportunity. In the past we focused on trade and neglected industry; now we must overcome that neglect.”

“Norte de Santander has potential for agriculture and mining (oil, gas and coal), and 21 municipalities are reserved for nature tourism,” said González of the chamber of commerce. “But an area with 1.3 million people centred on Cúcuta is basically a service region tied to Venezuela’s economic cycles.”

San Cristóbal, the capital of Táchira, “has one million people in its metropolitan area and we envisage it as a twin city for Cúcuta and a centre for the supply of goods and services on the border, including education and health,” said Daniel Ceballos who is running for mayor as the candidate of the Coalition for Democratic Unity, an opposition alliance.

“When all is said and done, over half the people of Táchira have ties to Norte de Santander, and a large part of the people of that Colombian region are connected with people here,” said the Catholic bishop of Táchira, Mario Moronta, speaking for those in favour of opportunities to overcome the problems. “They may think differently in Bogotá and in Caracas, but this is how things are here and will continue to be.”