SAN ANTONIO DEL TÁCHIRA, Venezuela, Dec 20 2009 (IPS) - “We’re second-class citizens, victims of a war that hasn’t broken out,” said José Duque from behind the wheel of a car carrying passengers from San Cristóbal, in southwestern Venezuela, to the border with the northeastern region of Colombia, near the city of Cúcuta. 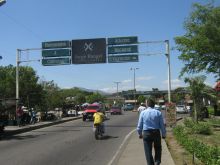 Along the way, winding through the Andes mountains 700 kilometres southwest of Caracas, gasoline stations are besieged by endless lines of vehicles, whose drivers are resigned to waiting two, three, even four hours to fill their tanks.

Duque has a list of complaints almost as long as the gas line-ups. “Where I live we have blackouts for several hours every night. A lot of days we have no running water. When you make a living on these highways you’re in constant danger of getting robbed, or being forced to pay bribes. And on top of everything, this oil-exporting country sabotages our work by rationing gasoline.”

Gasoline is a source of massive cross-border smuggling activity. Authorities in both countries estimate that more than 10,000 barrels (1.6 million litres) are smuggled daily from Venezuela into Colombia, where gasoline is sold at 15, 20 or 25 times the price in Venezuela, which has the world’s cheapest gasoline.

A community leader from the city of San Antonio del Táchira, who asked to be identified only by his first name, Carlos, told IPS that Colombian “mafias” like the Black Eagles, made up of former members of far-right paramilitary groups in Colombia, “have controlled the smuggling of gasoline, food and plastic products from Venezuela to Colombia for years, and also the smuggling of goods from there to here.”

San Antonio is a bustling Venezuelan town with a population of just over 50,000 where the economy is driven by retail sales, with hundreds of businesses selling clothing and other textiles, leather goods, electronics, appliances, vehicles and a vast array of other consumer goods.

“Here, almost everyone pays a ‘tax’ to the paramilitary mafias. This bakery where we’re having a coffee pays one for sure, the ice cream place across the street too, the same as all the stores on this block,” said Roberto, another local resident and member of a political party that backs Venezuelan President Hugo Chávez.

One of the town’s main streets runs directly onto the Simón Bolívar bridge, which connects Venezuela and Colombia across the Táchira River (reduced to a trickle during the current dry season). The narrow bridge carries an endless flow of cars, trucks, motorcycles, bicycles and pedestrians between the two countries, as border guards on both sides look on with apparent indifference.

In March 2008, the bridge was used as a stage by performers from throughout Latin America and Spain, headed up by Colombian singer/songwriter Juanes, who organised a “peace concert” aimed at easing the tensions between Bogotá and Caracas, attended by tens of thousands of young people gathered along the dried-up river bed.

“This is nothing compared to what it was like a year ago. The traffic was so heavy that it took hours to get across the bridge, because of the trucks that used to come from Colombia with all kinds of merchandise, and the Venezuelans going over there to spend their dollars. But that’s all over now,” commented Carlos.

Trade between Colombia and Venezuela reached a record high in 2008 of 7.2 billion dollars, with Colombian exports accounting for six billion. Almost 90 percent of the merchandise traded was transported by land, much of it over the Táchira River.

During the first half of 2009, however, the volume of trade declined as a result of the worldwide economic crisis. Venezuelans, subject to strict currency exchange rules, also had fewer dollars to spend due to an official exchange rate that overvalued the national currency.

Then, in July, the Venezuelan government drastically cut imports from Colombia as part of an overall cooling of relations with the neighbouring country, after Colombia opened seven of its military bases to U.S. troops.

Chávez accused Colombia of paving the way for a U.S. attack on Venezuela, and instructed the armed forces and his followers to step up defence measures, evoking the Latin adage, “If you want peace, prepare for war.”

The flow of trucks across the border has declined considerably, but a small amount of legal border trade has been maintained, while contraband merchandise continues to be carried across in cars and trucks, by foot, and on motorcycles, bicycles and even beasts of burden.

“Smuggling has continued along with legal trade. Dozens of Colombian businessmen have opened up stores in San Antonio, and bought ranches along the border. A lot of families, who have relatives on both sides of the border, buy what they need wherever they find the best quality or lowest price,” said Roberto.

In La Parada, on the Colombian side of the cross-border bridge, numerous houses, stores and repair shops serve as a front for money changers, who openly handle wads of Colombian pesos, Venezuelan bolivars and U.S. dollars. There is also a flourishing business for unlicensed taxi drivers and makeshift gasoline dispensaries all along the highway to Cúcuta.

“We’re charging 18,000 pesos (nine dollars) for a 20-litre tank,” teenaged gasoline vendor Manuel told IPS. “I sell between 15 and 20 a day. I make enough to eat, but I’d rather have a different job, with less sun and more money,” he commented.

The price of gasoline can vary daily, he explained, “depending on how hard it is to get it across. When the Venezuelan National Guard cracks down, the price goes up.”

Manuel and others like him merely sell the tanks full of gasoline. As for acquiring and filling the tanks and setting the prices, “that’s all handled by them, you know, the bosses of this business,” he said, without going into further detail.

According to Carlos, “All of these businesses are run by networks controlled by former paramilitaries. They pull the strings on both sides of the border. That’s why when they organised a protest, San Antonio joined in, right away, without hesitation.”

In early November, when the Venezuelan authorities stepped up border control measures on the main cross-border bridges, porters and other workers in the area staged a protest on the Simón Bolívar bridge, and businesses in San Antonio closed their doors for the day.

Ten individuals who were handing out pamphlets in support of the strike were arrested and could be charged as members of Colombian paramilitary groups. The leaflets also contained death threats against some people in the area.

“For the protest on the bridge, the mafias mobilised the motorcycle-taxi workers from the 15 companies of this kind in San Antonio, who are sort of like their cavalry,” said Roberto. “And the vast majority of businesses in town closed that day, because if they didn’t they would have to pay the mafias a ‘fine’, and if they didn’t pay up, they’d be setting themselves up for even worse things.”

Carlos said “this shows that the (Colombian) paramilitary mafias and their accomplices in Venezuela are the law here, they’re the ones who administer justice. And not only in San Antonio. They are moving into the small towns and rural areas. They have already arrived with their ‘taxes’ and ‘fines’ in San Cristóbal and even farther away.”

“This feeling that the laws of Venezuela no longer rule here is affecting all of the educational and organisational work we do,” said Rosalía, who works in San Antonio and the neighbouring town of Rubio as a facilitator for communal councils, the grassroots social organisations promoted by President Chávez.

But on the other hand, “this climate of contraband we live in means that people here can always find some way to make a living, they can always go and work on the border, getting something across from here to there or from there to here,” she told IPS.

“There have always been and there will always be goods moving across the border, legally or not, depending on whether potatoes or meat or rice are cheaper here or there,” said Duque. “But the fact that gasoline costs the same in Venezuela as it did 10 years ago is a problem that the government hasn’t been able to come to grips with.”

In recent weeks, shipments of gasoline to the state of Táchira, in the southwest corner of Venezuela, have been cut back, and many service stations are on the verge of collapse, after years of taking advantage of the rationing measures that limit the sale of gasoline to 30 litres per car at a time.

Despite the 30-litre rule, “if you have a van and need 60 or 70 litres, they’ll sell it to you, but you have to pay double the price or more, as a ‘contribution’ to the station owner and the national guard officer responsible for keeping watch,” explained Duque. “Multiply that contribution by 300 or 400 cars a day.”

For his part, Carlos believes that “all of these situations that make it possible to make a lot of money for tolerating crime can lead you to believe the rumours that people spread, like the ones about a private in the national guard buying a big four-wheel drive truck, or national guard members who pay to be stationed at the border and not in the middle of the country.”

The problems with gasoline supplies have sparked protests. In mid-December, during a clash between students from the opposition and Chávez supporters, one participant was shot and killed.

At a gasoline station on the outskirts of San Cristóbal, Rosa Candia, a mother of two who drives her daughters to and from school every day, concurred with Duque: “Like everywhere else in the country, we suffer from the rationing of electricity and water, and insecurity, and now they’re rationing our gasoline, even though the country sends oil to other countries at subsidised prices or even for free.”

Candia added: “It used to be an advantage to live on the border. We would go to Cúcuta (an hour and a half away by car) to buy what was cheaper there, and Táchira lived off of trade, tourism and agriculture. Now the paramilitaries and guerrillas have come here with their problems, and on top of that, Caracas treats us like second-class citizens.”