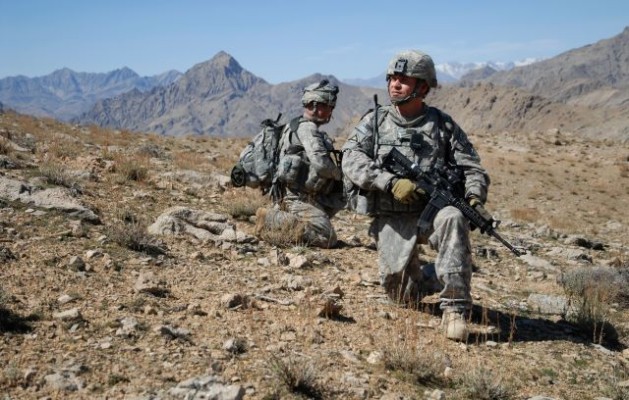 More than half of the more than 1.5 million troops who have been discharged from active duty since 9/11 have received medical treatment at veterans’ hospitals and have been granted benefits for the rest of their lives. Credit: US Army/public domain

WASHINGTON, Mar 30 2013 (IPS) - Costs to U.S. taxpayers of the wars in Iraq and Afghanistan will run between four and six trillion dollars, making them the most expensive conflicts in U.S. history, according to a new report by a prominent Harvard University researcher.

While Washington has already spent close to two trillion dollars in direct costs related to its military campaigns in the two countries, that total “represents only a fraction of the total war costs”, according to the report by former Bill Clinton administration official Linda Bilmes.

“The single largest accrued liability of the wars in Iraq and Afghanistan is the cost of providing medical care and disability benefits to war veterans,” she wrote in the 21-page report, ‘The Financial Legacy of Iraq and Afghanistan: How Wartime Spending Decisions Will Constrain Future National Security Budgets’.

Bilmes, who since 2008 has co-authored a number of analyses on war costs with the World Bank’s former chief economist, Joseph Stiglitz, noted that more than half of the more than 1.5 million troops who have been discharged from active duty since 9/11 have received medical treatment at veterans’ hospitals and have been granted benefits for the rest of their lives. More than 253,000 troops have suffered a traumatic brain injury.

Additional costs include the replacement and repair of equipment — which wears out at an estimated six times the peace-time rate — and the accumulation of interest on money borrowed by the Treasury to finance the wars since the nearly two trillion dollars in war costs were not subject to the normal budgetary process.

So far, Washington has paid some 260 billion dollars in interest charged on war-related borrowing, but the “potential interest cost of the U.S. war debt reaches into the trillions,” according to the report.

“One of the most significant challenges to future U.S. national security policy will not originate from any external threat,” she wrote. “Rather it is simply coping with the legacy of the conflicts we have already fought in Iraq and Afghanistan.”

The report comes at a key moment, as Republicans in Congress appear increasingly split between defence hawks on the one hand, who want to maintain or increase Pentagon spending and have been pushing for a more aggressive U.S. role in the Syrian civil war, among other hotspots, and deficit hawks, on the other, who believe the country can ill afford bigger military budgets, let alone new foreign military adventures, especially in the Middle East.

The defence hawks, consisting primarily of neo-conservatives and aggressive nationalists who led the march to war in Iraq 10 years ago, are particularly worried about the impact on the military of the so-called “sequester”, which requires across-the-board cuts by the Pentagon totalling 500 million dollars over 10 years, in order to help reduce the deficit.

With tensions with Iran, North Korea and even China on the rise, they argue that Washington cannot afford to be seen as constrained militarily by its fiscal challenges.

But this report – as well as another put out by Brown University on the tenth anniversary of the Iraq invasion that estimated the total war costs at three trillion dollars – are likely to bolster the deficit hawks among Republicans, as well as foreign-policy realists most closely identified with the administration of President George H.W. Bush, and most Democrats, including President Barack Obama and his closest aides.

That most war-related costs are actually incurred after the wars are themselves concluded is not unusual in U.S. history, according to a recent investigation by the Associated Press (AP).

After researching federal records, it reported last week that compensation for World War II veterans and their families only reached a high in 1991 – 46 years after the war ended.

It also reported that, almost exactly 40 years after the last U.S. combat troops left Vietnam, the government is still paying veterans and their families or survivors more than 22 billion dollars a year in war-related claims, and that that figure is on the rise, as the beneficiary population ages. Similarly, payments to Gulf War veterans are also increasing.

The much-greater costs to be incurred by the Iraq and Afghanistan wars are explained by, among other factors, much higher survival rates among wounded soldiers, more generous benefits for veterans, new categories of beneficiaries, more expensive medical treatments, and increases in both pay and benefits for troops in order to gain more recruits for the all-volunteer army.

The report argued that dramatic increase in war-related costs means taxpayers will not get the kind of “peace dividend” that they received after other wars, including the two world wars and the Cold War after the collapse of the Soviet Union.

“Today as the country considers how to improve its balance sheet, it could have been hoped that the end of the wars would provide a peace dividend, such as the one during the Clinton administration that helped Americans to invest more in butter and less in guns,”
it concluded.

“In short, there will be no peace dividend, and the legacy of Iraq and Afghanistan wars will be costs that persist for decades.”

The Pentagon and other national-security agencies, according to the report, will likely face more – rather than less – pressure to cut costs.

“One likely result,” it predicted, “is that budgetary constraints will tilt the U.S. in a direction of fewer military personnel in the forces, …and greater investment in unmanned weaponry, robotics, and other technological solutions – which may or may not be a wise choice over the longer-term.”

To Miriam Pemberton, a national-security analyst at the Institute for Policy Studies, the new study should prompt a major re-assessment of the regular military budget (not including the costs of the Iraq and Afghanistan wars), which grew by nearly 50 percent in real terms to more than half a trillion dollars – over the decade that followed 9/11.

“We need to bring that budget back to where it was when these wars began,” she told IPS. “Those savings need to be re-invested in the needs that have been neglected over the past decade, foremost among them, in my view, being the urgent need to address the climate crisis by investing in a transition to a clean energy and transportation economy.”