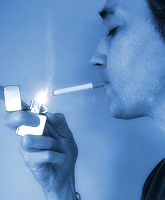 In the next 10 years, some 388 million people will die of these largely preventable diseases, which are caused mainly by smoking, poor diet and lack of exercise. Often thought to be diseases of the rich, most of these deaths will be in the developing world, conclude the authors of a study published in the journal Nature this month.

"We have a huge health crisis here that few policymakers and other officials are aware of," said lead author Dr. Abdallah S. Daar of the McLaughlin-Rotman Centre in Toronto, Canada.

Developing countries, and medical and donor groups have focused almost entirely on infectious diseases, Daar told IPS. "But that&#39s like putting out one fire in a house burning from both ends," he said.

The good news is that there are easy solutions to prevent these chronic non-communicable diseases.

"With concerted action, we can avert at least 36 million premature deaths by 2015. Some 17 million of these prevented deaths would be among people under the age of 70," the report estimated.

Smoking is the most preventable behaviour, and an obvious place to start, they found.

Tobacco-related deaths have hit five million a year and are expected to double to 10 million a year by 2030, with most fatalities in developing countries, the World Lung Foundation reported last week. In comparison, HIV/AIDS kills two million people and TB is responsible for about three million deaths a year, and is either declining or stable in most countries.

Children&#39s exposure to tobacco smoke is "unbelievable" in the Middle East, India, China and elsewhere in the world, said Daar. Smoking is injuring young lungs, causing cancers, and polluting the environment, among a multitude of other evils, he said.

Rapidly losing customers in rich countries due to higher taxes and public health campaigns about the negative impacts of smoking, cigarette companies have focused their considerable advertising power on the developing world, which can ill afford the cost of buying a highly addictive product and the huge burden smoking imposes on already strained health systems.

Educational efforts and bans on tobacco advertising are just two of the measures that can be employed to reduce the number of smokers. Millions of lives could be saved with some simple steps as outlined in the World Health Organisation Framework Convention on Tobacco Control. However, many countries need support to launch such measures, Daar said.

Among the general recommendations Daar and co-authors call the "20 Grand Challenges" is make these chronic, non-infectious diseases a "political priority", along with the promotion of healthy lifestyles. Governments also need to put stiff regulations in place to discourage consumption of tobacco, alcohol and unhealthy foods.

"Inaction is costing millions of premature deaths throughout the world and will offset the gains from a decreasing burden of infectious diseases," said Stig Pramming, executive director of the Oxford Health Alliance.

"Chronic non-communicable diseases constitute the major burdens of illness and disability in all countries of the world apart from sub-Saharan Africa," Pramming told IPS.

And yet even in sub-Saharan Africa, some people are consuming more junk food and sugary drinks, smoking and not getting enough exercise.

"People are dying of heart disease at ago 30," said Daar.

The challenge for the world community is to bring development to poor communities without the negative consequences. Too much focus on development and not enough on health creates situations such as in Russia, where the economy is booming but the average life expectancy has fallen by eight to 10 years, says Pramming.

Life expectancy for Russian men has plummeted to 58 years, compared to 72 years for the average British man.

"If Russia does not reverse this, then its economy will begin to decline as well," Pramming noted.

The United States is also facing soaring obesity levels of about 25 percent of all adults. Without action to halt and reverse the obesity epidemic, the health burden on U.S. society, currently estimated at 100 billion dollars a year, will be so great its economy will be in real trouble, he said.

In the United States and elsewhere in the world, junk food is far cheaper than high quality food so the poor are the most affected by these non-infectious diseases.

"Governments need to make healthy foods cheaper and if necessary subsidise them," he said.

Policy changes that stop favouring agri-business and mass food production will be required.

"It&#39s a very complex problem but not a particularly difficult one," Pramming said.

Many of the measures needed overlap with what needs to be done to tackle climate change, he said. Making fresh food available locally rather than isolating it in vast outlying supermarkets that require a car to get to is just one example.

"Healthy lifestyles contribute to a healthy planet," he said.