COLOMBIA: "Mark Him on the Ballot – The One Wearing Glasses" 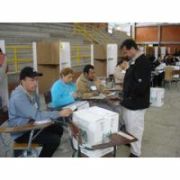 That is why her fishing and farming village of 800 people in the central Colombian region of Magdalena Medio decided overwhelmingly to vote for current President Álvaro Uribe in the 2002 presidential elections, when he first ran.

The woman agreed to talk to IPS on the condition that she be asked neither her name (we will call her "L.") nor the name of her village.

The main city in the fertile region of Magdalena Medio is Barrancabermeja, an oil port on the Magdalena River, which runs across Colombia from south to north before emptying into the Caribbean Sea.

What convinced the villagers to vote for Uribe? "Because the region where we live is poor, very poor, it’s so difficult to find work, and when I heard him say ‘I am going to work for the poor, I am going to help them,’ I thought ‘this is a good president’."

When the rightwing president’s first four-year term came to an end in 2006, most of the villagers decided again to vote for him, reasoning that he just needed more time to reduce poverty.

The odd thing was that in both the 2002 and 2006 elections, despite the fact that the villagers had already decided to vote for Uribe, the far-right paramilitaries, who had committed a number of murders since 1998, when they appeared in the region that was previously dominated by the leftwing guerrillas, pressured the local residents to vote for Uribe anyway.

The paramilitaries did not kill people to pressure the rest to vote for Uribe, as they did in other communities, but merely used "threats," said L.

"If you don&#39t vote for Uribe, you know what the consequences will be," the villagers were told ominously.

And on election day, they breathed down voters’ necks: "This is the candidate you’re going to vote for. You’re going to put your mark by this one. The one wearing glasses," they would say, pointing to Uribe’s photo on the ballot, L. recalled.

"One (of the paramilitaries) was on the precinct board, another one was standing next to the table, and another was a little way off, all of them watching to see if you voted for Uribe," she added, referring to the less than subtle way that the death squads commanded by drug traffickers and allies of the army ensured that L.’s village voted en masse for the current president in both elections.

"We form part of a municipality where there is corruption, from the mayor to town councillors, the police, the army and the justice officials – in a word, everyone. They are just one single corrupt mass. So what are you supposed to do?" said L., who added that the paramilitaries "control everything."

In 2002, the paramilitaries joined the election campaign in L.’s village, promising to close off a pipe that during the rainy season floods a field where people put their cows out to graze in the summertime and "where the farmers plant the food we depend on: rice, cassava and maize," she said. "But what we didn&#39t know at first was that they (the paramilitaries) were with the president who we hoped would improve our poverty," she added.

At the same time, L. had few good things to say about the Revolutionary Armed Forces of Colombia (FARC) and National Liberation Army (DLN), the guerrilla groups that dominated the Magdalena Medio region for years after they first emerged in 1964.

"Instead of creating jobs for us, what they did was to make us lose the ones we already had," she said.

In addition, many people left the area because the insurgent groups were winning over and recruiting their teenage sons and daughters.

Although in the first few decades, the guerrillas "stayed out of sight…when they became active, it immediately became clear to us that everything was going downhill."

Then the paramilitaries arrived. At first, said L., they killed only a few people, those who they considered to be involved with the guerrillas. But then they began to pressure local peasant farmers to sell their land.

That pushed many members of the community into ruin, because the 40,000 dollars that they were given, on average, by the paramilitaries for their farms did not last long.

Today the area is one of large plantations of African palm trees, heavily guarded by paramilitaries, despite the partial mobilisation of the far-right groups as a result of talks with the Uribe administration.

When going from one place to another, said L., locals must often take the long way round, because "that area is off-limits to the local peasant farmers."

Some demobilised paramilitaries have taken to highway robbery, while others form part of "newly rearmed" groups, like the "Black Eagles", which first appeared in the Magdalena Medio region, as reported by IPS in April 2006.

Uribe won the 2002 election with 53 percent of the vote. If he had taken 300,000 fewer votes, a runoff would have been necessary, in which an alliance of his adversaries (the social democratic Liberal Party and the left) would have stood a chance.

But in 2006, he won a landslide victory, garnering over 62 percent of the vote.

Just how many legislators, governors, regional lawmakers, mayors and town councillors benefited from paramilitary pressure is something that the Supreme Court and the Attorney General’s Office are just now beginning to elucidate. Talk in Colombia these days is about who is the latest politician to be arrested or investigated for ties to the paramilitaries.

"‘Parapolitics’ is the seizure of power in Colombia by a convergence of alliances and interests of the regional and national political elites, drug traffickers, and armed force," Claudia López, one of the authors of a report titled "Parapolitics: The Route of Paramilitary Expansion and Political Accords", told a packed auditorium at the Bogotá International Book Fair.

She was announcing the release of the third edition of the report, produced by the Bogotá think tank Corporación Nuevo Arco Iris.

The death squads have warned that orders have been issued to kill several of the report’s authors.

López’s monitoring of local and regional election outcomes in Colombia from 1994 to the present points to suspiciously abrupt shifts in voting patterns in entire regions after the paramilitaries gained control in those areas.

These shifts eventually drew the attention of the Supreme Court, which according to the Colombian constitution is responsible for investigating and trying members of Congress, and for bringing to trial high-level officials normally protected by immunity from prosecution, for crimes committed on their watch.

The more than 70 legislators and other politicians currently in prison or under investigation in the context of the "parapolitics" scandal won a total of 1.8 million votes in the last elections.

In the case of five of the seven parties making up the governing coalition, more than half of their lawmakers are now in prison.

Those five parties accounted for one-third of the 9.2 million votes taken by all senators in 2006.

In April, former senator Mario Uribe, the president’s cousin and chief political ally, was arrested for his links to the paramilitaries.

Questions have also arisen about the legitimacy of the constitutional reform that made it possible for Uribe to be elected to a second consecutive term.

In late April, Yidis Medina, a former legislator from Barrancabermeja, turned herself in, hoping to benefit from a legal provision that would reduce the sentence awaiting her, of up to eight years.

Medina is accused of accepting favours from the executive branch in 2004 to change her vote in Congress on the constitutional reform on re-election.

The former lawmaker said that in exchange for her vote, Uribe, two of his cabinet ministers and his chief of staff told her she could name members of three local commissions in her province.

In addition, she handed over evidence that through her, they also paid around 200,000 dollars to another parliamentarian, Teodolindo Avendaño, who, like Medina, had announced that he would vote against the constitutional reform allowing for re-election. But just before the vote, he left the floor of Congress.

According to journalist Daniel Coronell, news director at the Noticias Uno TV station, to whom Medina had leaked videotaped information about the bribe, "she was told that the very survival of the state hinged on the question of re-election."

Another question is how many votes like the ones described by L. benefited Uribe in communities where he otherwise would not have won strong support.

Analysts say that what is collapsing in Colombia today is the legitimacy of the executive branch and the ruling alliance.

The governing parties have set forth several proposals, such as the creation of a special "institutional adjustment" commission, named by the very legislators who are under scrutiny for their ties to the paramilitaries.

The commission would be an alternative to a proposed referendum in which voters would be able to recall the current members of Congress, and perhaps even the president, or to a referendum on whether or not to convene a constituent assembly to rewrite the constitution.

A committee named by Uribe also suggested the creation of a "supra-constitutional" tribunal to investigate and try the president, the vice president and high court judges – an idea that was described as an "aberration" by the country’s central trade unions, the Movement of Victims of Crimes of the State and other human rights organisations, and academic institutions in a statement read out in the celebration of International Workers Day on May 1.