Q&A: Of Elephants, Mice and Fleas 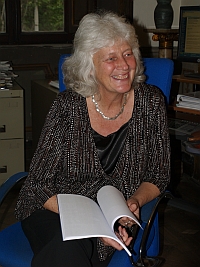 Oxfam Novib is the "elephant", in her words, at Oxfam International, a confederation of 13 organisations working with over 3,000 partners in more than 100 countries, whose aim is to fight "for a just world without poverty".

She talks with IPS Editor-in-Chief Miren Gutierrez about her legacy and other issues such as aid and how that intermixes with gender, and her work at the Global Call to Action against Poverty (GCAP).

IPS: Oxfam International is a heterogeneous association… Was it difficult to keep a common goal and work together?

Sylvia Borren: Oxfam Novib is not large or influential enough on its own. The idea was to try to achieve greater impact through collective efforts. We had to jump over our shadow and link hands in order to have an impact. This became a strategic priority.

We are heterogeneous. At Oxfam we say we are an organisation of elephants (Oxfam Great Britain, Oxfam Novib), mice (Oxfam Australia, the U.S., Belgium, Hong Kong) and fleas (New Zealand, Ireland). And to my great delight Oxfam India and Oxfam Mexico are joining.

To handle this diversity we went from a representational to a competency business model, which made it possible to benefit from everyone’s strengths. For example, New Zealand is excellent in evaluation; Belgium, in mobilisation; Australia, in working with youths in parliament; Great Britain has more people on the ground… You have less paternalism this way… The win-win situation comes when you combine these qualities.

SB: We didn’t always agree, there was a lot of internal debate. For example, in Novib we went from the old paradigm of approaching the government, saying: "give us money and we will solve the problem (of poverty)", to a new strategy that saw the need to work together with others, in alliances including corporations, civil society, civil servants, individuals as consumers, as travellers. We went from the North-South approach to a global approach. That was already in our 2000-2004 plan, but it was not always understood externally or internally, and the implementation took longer. I leave a healthy organisation; it took five or six years.

IPS: The name "Oxfam" comes from the Oxford Committee for Famine Relief, founded in Britain during the Second World War … Is that still relevant?

SB: Oxfam’s humanitarian work is still very important. Oxfam GB provides water and sanitation in most emergencies. Oxfam’s five aims are about livelihoods, basic social services, security, participation, and gender/diversity. Ten percent of Oxfam Novib’s resources go to humanitarian causes, contingency plans and quick reactions like the tsunami relief efforts. But capacity building is as important in order to avoid bigger catastrophes, and to do that you need to work with local, southern partners.

IPS: Relief operations are giving room to more proactive approaches. There is still a lot of debate about, for example, in preventing famines. What is your position?

SB: You don’t hear too much about famines, these slow emergencies that are so pernicious. There is a lot of power politics involved. What happens in famines is that they wait too much, and then it is too late to prevent them… Food dumping is pervasive, and can kill the more local and regional markets. Some NGOs want to stop it, and work toward local food sovereignty.

In Somalia, some years ago, we started to distribute cash relief. We were quite brave at doing it, there was a strong monitoring system in place and it was done in cooperation with local partners and U.N. organisations. Monitoring the plan in such detail made it more expensive, but it went really well. IPS: This debate is going to become crucial with rising food prices and the world’s economy shrinking. How do you think these factors influence international aid?

SB: The hikes in food prices will affect the poorest people. We have to look at the whole system. Local farmers have been told that the liberalisation of food markets was not a bad thing. But in many cases, it undercut them, created food insecurity, encouraged monopolistic interests and justified the validity of imports. And in a situation of scarcity of food, the ones most affected are the poorest of the poor: women and girls. The MDGs (Millennium Development Goals) will set back.

IPS: There is no doubt that investing in women is investing in development. There are some positive trends, but the overall situation is not good.

SB: Some countries are improving, but some are even going backwards… For me, women’s movements have not understood enough that they need to cooperate with other social movements in order to get results. And many social movements still do not see that the rights of girls and women are central issues, yes, also when you are talking about arms trade or climate change Also the two main strategies employed by the women’s movement, the "stop" strategy (calling for an end to violence and discrimination against women), or the "move over" strategy (trying to ensure a fair share of social spending and decision making power) are not enough. A third transformative strategy should be added: the "different together" strategy – which would demand a new kind of leadership from both women and men. It is based on sharing power and resources more fairly; identifying common values; and respecting diversity of identity.

IPS: You are one of the three co-chairs of GCAP.

SB: The campaign has been amazing. In 2006 we estimated that 1 million people would stand up against poverty, and the reality in one day (measured by the Guinness Book of Records) was 23 million. We were not sure whether that could happen again in 2007, and it was 43.7 million. We know there were many more events that week that were not counted. There are examples of advocacy results too, which can be directly related to the GCAP campaign.