ENCARNACIÓN, Paraguay, Aug 14 2008 (IPS) - Hundreds of people living in the Paraguayan border city of Encarnación are worried about flooding as the result of a rise in water level in the Yacyretá hydroelectric dam, an issue that is also causing tension between Paraguay and Argentina. 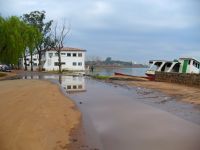 In mid-July, the Entidad Binacional Yacyretá (EBY), the commission created by Argentina and Paraguay to jointly manage the dam on the Paraná river, decided to raise the water level in the dam to 78.5 metres above sea level, 70 cm higher than the previous limit.

That led to an unusual increase in the water level in the Paraná river, on whose banks Encarnación is located at the southeastern tip of Paraguay.

A complementary infrastructure project known as the Yacyretá Dam Completion Plan has not yet been finished in the city. The plan is to involve the relocation of some 4,000 families, and the mitigation of the environmental impacts generated by the flooding caused by the project.

The plan also includes the construction of roads, such as a 28-km route running along the river, an airport and new commercial zones, requiring an investment of more than 200 million dollars.

The area hit hardest by the rising water level in the Paraná river is the Zona Baja, or Low Zone – the commercial district of Encarnación, where some 1,000 shopkeepers and street vendors do business.

A Paraguayan judge ruled in favour of an appeal filed by the Federation of Persons Affected by the Yacyretá Dam in Itapúa and Misiones (FEDAYIM) and ordered a reduction in the water level. But in Argentina another judge, at the request of the EBY, dismissed the lawsuit arguing that the dam is binational. The legal dispute has not yet been resolved.

Argentina is demanding that the pending works at theYacyretá dam be completed promptly, to alleviate the country’s energy shortage. The dam currently provides 14 percent of Argentina’s electric power, a proportion that is to expand to 20 percent once the dam has reached its maximum electricity generating potential.

Paraguayan president-elect Fernando Lugo, who takes office on Friday, spoke out on behalf of the local families and shopkeepers, and in a harshly worded statement said "the decision reached by the current Paraguayan authorities" to raise the water level in the dam was "irresponsible."

He also called for an immediate reduction in the water level until the complementary works are completed, and described the situation in the area as "an environmental and health emergency."

Local families and shopkeepers complain that in some parts of Encarnación the latrines haven't been sealed off prior to flooding, and there have been serious delays in the construction of the new buildings to which the shopkeepers are to be relocated.

Lugo met with Argentine President Cristina Fernández to ask that the water level be reduced, but it is not yet clear whether she will accept his request.

Paraguay consumes just five percent of the energy generated by Yacyretá and sells the rest to Argentina at one-third of market price, say local experts.

Lugo has announced his intention of renegotiating the price that Argentina pays for energy from the dam, which he considers the result of an unfair agreement between the two countries, in order to increase funding for social plans and infrastructure works in this impoverished nation of six million people.

The EBY hopes to complete work on the Yacyretá project in 2009 and bring the water level in the dam up to 83 metres, to reach the maximum annual electricity generating capacity of 19,500 gigawatt-hours.

Raising the water level to 83 metres will require the flooding of an additional 55,000 hectares, to be added to the 110,000 hectares already under water as a result of the dam. Eighty percent of the flooded land is on the Paraguayan side of the border.

The concerns of local residents, meanwhile, are rising along with the water level.

"So far, Yacyretá has not lived up to even 10 percent of what was promised," complained Eugenio Medina of the Asociación de Propietarios de Carrobares de la Zona Baja, a local street cart association that groups 31 food vendors.

Medina has worked at his small stand, less than 100 metres from the banks of the Paraná river, for 22 years.

"No one was even warned when the water level was raised," he told IPS. "What we are especially worried about is the pollution, because many latrine pits are now underwater. They promised to relocate us, but we don't know where or when, and we have to keep working."

Each person relocated from their home or workplace is to receive 4,000 dollars in compensation, in two lump sums. But only a few have received the first payment so far, said Bonifacio Sánchez, who owns a business in the Zona Baja commercial district.

A number of shopkeepers have insisted that all of the businesses and stands be relocated simultaneously, so the new commercial district will maintain its draw. They argue that the current location attracts tourists, and that the move will be a disaster for local businesses.

Encarnación Mayor Juan Alberto Schmalko also disagrees with the decision to raise the water level in the dam.

"This was too hasty," he remarked to IPS. "We don't agree with raising the water level before the problems have been solved and before the whole area has been cleared out properly and the necessary environmental treatment completed."

Early this month, a group of Encarnación town councillors brought legal action in Paraguay against the EBY, accusing it of crimes against the environment.

According to town councillor Luis Yd of the conservative Partido Patria Querida (Beloved Fatherland Party), the binational commission raised the water level in an arbitrary fashion with the aim of forcing people to leave the area, pushed out by the water.

The EBY has consistently promised in talks with local authorities not to raise the water level until residents and businesses were relocated, he said. "But apparently the decision was a unilateral one taken by the Argentine side of the binational body," Yd added.

The town councillor told IPS that "the campaign will continue until the waters go down again, because the damages already caused are enormous, especially for businesses located in the flooded lower part of the city."

Construction of the Yacyretá dam began in 1979, when both Argentina and Paraguay were ruled by military dictatorships. The initial projected cost of 2.5 billion dollars ballooned with the passage of time, and the investment has now surpassed 15 billion dollars – a fact that many critics blame on corruption.