LIMA, Sep 18 2008 (IPS) - The Peruvian army continues to withhold information from the legal authorities who are investigating the murders committed by members of the military during the country’s 1980-2000 armed conflict. 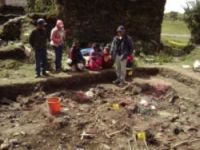 After the remains of nearly 100 people were found in the highlands village of Putis in the southern province of Ayacucho, the provincial prosecutor, Rubén López, asked the army, through Defence Minister Ántero Flores, to “provide a detailed report on the military personnel, officers and non-commissioned officers, deployed in the military garrison” in that village, according to a document seen by IPS.

The army responded that it had no information.

López’s requests are dated Jun. 16 and 18, and the last official response from the Defence Ministry was sent on Aug. 25.

According to testimony compiled by the Truth and Reconciliation Commission in its 2003 report, in December 1984, troops from the Putis army base killed at least 123 villagers suspected of collaborating or sympathising with the Maoist Shining Path guerrillas. Around one-third of the victims were children.

In May and June this year, the Peruvian Forensic Anthropology Team began to exhume the remains of the Putis victims from mass graves, counting the bodies of 97 people so far, including 38 children under the age of 10.

The forensic experts confirmed what witnesses had testified: that the victims were executed, rather than killed in a confrontation with members of Sendero Luminoso.

In response to López’s requests for information, the Defence Ministry merely repeated what the army has consistently maintained: that it has no documents showing the identity of the military personnel stationed in Putis in 1984.

The Ayacucho provincial prosecutor also sought information from the joint chiefs of staff on the operation plans for Putis, and received the same answer: none is available.

In the document seen by IPS, the head of the joint chiefs of staff, General Otto Guibovich, stated that “no information related to the case of Putis has been found in the archives.”

Because it was the office of the joint chiefs of staff that approved counterinsurgency operations during the armed conflict, activists say it is odd that it has no records on Putis, one of the areas that was devastated by the civil war.

By contrast, there is evidence that the army has files on its counterinsurgency activities, including clandestine operations.

In 2002, Judge Victoria Sánchez Espinoza, who was investigating the “Colina Group”, a death squad made up of army intelligence service (SIE) agents that committed the notorious Barrios Altos and La Cantuta massacres in 1991 and 1992, obtained important information from SIE files.

She discovered plans for clandestine operations, the aliases and real names of SIE agents, receipts for the payments that they received as compensation for their illegal activities, and other material that allowed prosecutions to go forward.

That information is also being used in the trials against former president Alberto Fujimori (1990-2000) and his all-powerful former intelligence chief Vladimiro Montesinos.

If the army documented the secret operations carried out by the Colina Group, it would seem to be even more likely that it would have the list of names of military personnel formally stationed at the Putis base, activists argue.

The refusal to provide information to the justice system was reportedly ordered by army chief General Edwin Donayre.

When the remains of the victims were found in Putis earlier this year and human rights activists suggested that the military should apologise, Donayre responded “and who is going to apologise for the army’s losses of more than 1,200 men and the more than 1,400 who were left disabled?”

“Thanks to the armed forces and the self-defence committees (vigilante groups of villagers organised and armed by the military), today we are living in conditions of peace and tranquillity,” he added.

Even Defence Minister Flores remarked that “the state cannot be brought to its knees to apologise in the face of terrorism.”

The Truth and Reconciliation Commission report states that the army set up a base in Putis due to the presence of Sendero Luminoso, which regularly killed villagers who refused to form part of its “people’s committees”.

In December 1984, villagers who had fled the area because of the guerrilla group’s abuses and had taken refuge in other villages or were hiding out in the hills were lured back to Putis by the army.

The villagers were gathered together in the school and told that they would now receive protection from the military, as well as assistance in different development projects.

The men were told to dig a ditch, supposedly for a fish farm. After that, the men, women and children were brought together around the pit, shot to death, and buried there.

According to the Truth and Reconciliation Commission report, the troops then seized and sold the victims’ farm animals, and leaked to the press an account of a supposed shootout in which 15 “guerrillas” were killed, to cover up the incident.

“It is difficult to understand the logic behind the killings. Even if the villagers were, hypothetically, ‘subversives’, they did not constitute a real threat to a well-equipped, heavily-armed battalion of soldiers,” said the head of the Peace and Hope Association, Nolberto Lamilla, whose group pressed for the exhumation of the bodies.

There are still at least a dozen more clandestine graves to exhume in Putis.