LILONGWE, Mar 20 2009 (IPS) - Water has become the very essence of economic development for a rural community of Ngolowindo, in Malawi’s lake district of Salima, where households are reducing poverty thanks to irrigation. 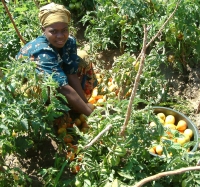 Ninety percent of Malawi’s agriculture is rain-fed but government is now pushing for more diversification into irrigation farming which allows farmers to grow crops even in the dry season and allows for additional harvests.

Taking advantage of the fresh water from Lake Malawi, the people of Ngolowindo are using simple irrigation methods to grow such produce as tomatoes, cabbages, mustard, onions, okra, green pepper, green beans, lettuce and maize on 17 hectares of land.

A vibrant agricultural cooperative, the Ngolowindo Horticultural Cooperative Society, has since emerged in the area and 159 people are now members. Each individual farmer is allocated a small piece of communal land and assigned a specific crop to grow. The produce is collected into one lot and is put on the market.

Eluby Tsekwe, the cooperative’s chairperson, proudly told IPS that her community has become the largest supplier of fresh produce to the residents of the country’s capital city, Lilongwe.

“We supply all the main supermarkets and individual vendors in the capital city with fresh produce which they sell to residents of the city. We make a substantial sum of money from there and this sustains our livelihoods,” she said.

Tsekwe said that members have to be 18 years and above. “We don’t want to get children into the cooperative since we believe they should be in school and not be involved in any type of child labour,” said Tsekwe.

For Tsekwe, a single mother of five, the financial benefits of this collective endeavour are evident; all her children, aged between four and 19, are in school. Despite her divorce leaving her alone as head of her household, she is also able to provide three meals every day to all her children in a country where, according to the United Nations, seven out of 10 households typically run out of food before every harvesting season.

Tsekwe has also managed to build a house of bricks with an iron sheet roof and cement floors. “A typical house here is one with mud walls and floors with a grass-thatched roof but I can afford to live better and I am very proud of myself,” she said.

But it has not been all rosy for the Ngolowindo project, according to Coordinator of Ngolowindo Horticultural Cooperative Society, Mercy Butao.

The cooperative coordinator explains that the agricultural initiative started at Ngolowindo in 1985 as an irrigation scheme and only became a cooperative in 2001. She said the project was initially driven by the government’s departments of water and agriculture through traditional leaders and community members.

“As a scheme, individual farmers worked in their own fields. They could only benefit from communal irrigation systems, but they were each others’ competitors when it came to marketing their produce,” Butao told IPS. During this time, the maintenance of irrigation structures such as drainage canals and irrigation canals was suffering.

The scheme was turned into a cooperative to improve marketing of the produce and for a more organized management of the project, according to Butao, but this also solved problems of maintenance.

“The farmers applied for funding from the European Union soon after forming the cooperative, and they used the money to upgrade their agricultural skills in irrigation farming and modern ways of crop production,” said Butao.

The Ngolowindo farmers have also been trained in marketing fundamentals, financial management, organisation management and agro-processing.

The Cooperation for the Development of Emerging Countries (Cospe), an Italian non-governmental organisation, has also assisted the Ngolowindo Horticultural Cooperative Society in the constructing irrigation structures and in human resources. Butao, for instance, is an agricultural expert, employed by Cospe since 2002 to provide technical support to the cooperative.

“The Ngolowindo project has grown so much and it is now moving into agro-processing,” Butao told IPS. She said in the absence of a processing project, there had been a lot of wastage of produce since the crops being grown are perishables.

“The cooperative has now diversified into the production of tomato juice and tomato sauce,” said Butao.

The project has 18 people working in agro-processing, using hand-powered machines to process the agricultural products. “We are yet to make it big in the agro-processing business. Our products are not developed enough to compete on market but we are working hard towards advancing further,” said Butao.

The cooperative is also working towards diversifying into livestock farming so as to use excess produce from the farming to feed the animals. “We also want to promote the use of animal manure in our farm,” Butao said.

Another member of the cooperative, Ginacio Kamoto, explains that he has benefited a lot from the cooperative. “I am able to provide employment to some people in my area. I employ them as casual labourers to assist me with farming. I employ up to six people per growing season,” said Kamoto.

But people like Tsekwe and Kamoto are still the exception in Malawi where up to 65 percent of the 13.1 million people live below the poverty line of less than a dollar per day.

According to the Ministry of Agriculture, the country is only irrigating 72,000 of 400,000 hectares of irrigable land. The country is yet to fully utilise Lake Malawi, a fresh water length which stretches the length of the country is the ninth largest lake in the world.