MONTREAL, Canada, Mar 10 2009 (IPS) - Some of the first species impacted by increasingly acidic oceans have been identified just as scientists meet in Copenhagen this week to present new data showing that climate change is far more urgent and serious than current economic problems. 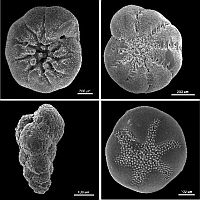 One affected species, foraminifera, play a crucial role in the sequestration, or storage, of carbon in the deep ocean. Credit: U.S. Geological Survey

One affected species, foraminifera, a sand grain-sized plankton, is responsible for the sequestration of 25 to 50 percent of the carbon the oceans absorb and thus plays a major role in keeping atmospheric carbon dioxide (CO2) concentrations at much lower levels than they would be otherwise. Now scientists have learned that foraminifera (forams) shells are much thinner in oceans made more acidic by the enormous volumes of CO2 released in the burning of fossil fuels.

It was only a few years ago that researchers realised that human emissions of CO2 were making the surface waters of oceans more acidic. That prompted a rush of new research to determine what the impacts might be. It turns out that forams, other shell forming species like mussels, as well as corals and fish are casualties in humanity's giant, uncontrolled experiment that involves injecting huge quantities of CO2 into the atmosphere.

"We think we are the first to document effects in the field as opposed to in a laboratory experiment," said William Howard of the Antarctic Climate and Ecosystems Cooperative Research Centre, Hobart, Tasmania, Australia.

The shells of one species of foraminifera (Globigerina bulloides) in the Southern Ocean are 30 to 35 percent thinner than shells than those shells formed prior to the industrial period, Howard and colleagues wrote in a paper published in Nature Geoscience Mar. 8.

Howard told IPS that forams live in the surface waters and when they die they fall to the ocean bottom. As they fell through the water column researchers collected them and compared their shell weights with forams in the sediments. Forams are widespread, numerous and have a 200-million-year-old ancestry. Their hard calcite shells are well preserved, providing a detailed fossil record of their time on Earth.

Using a combination of radiocarbon dating and stable oxygen isotopes researchers determined the ages of the shells on the ocean bottom surface and those buried deep in the bottom sediments. They found a linear relationship between shell weight and atmospheric CO2 concentration over the past 50,000 years. The more CO2 in the atmosphere, the thinner the shells, and vice versa, their studies reveal.

The current CO2 level of 380 ppm is the highest concentration in several million years. Projections are that ocean acidification in the coming decades will reach levels unseen since the era of the dinosaurs 65 million years ago when the oceans were very different, experts from the University of Bristol in Britain will announce at the International Scientific Congress on Climate Change in Copenhagen this week, according to news reports.

There is absolutely no controversy about the basic chemistry of additional CO2 increasing ocean acidity. The oceans naturally absorb carbon from the atmosphere and have now absorbed about a third of the total amount of human emissions. This additional carbon has altered the oceans' chemistry, making them 25 to 30 percent more acidic because the extra CO2 combines with carbonate ions in seawater, forming carbonic acid.

Shell-forming creatures – mussels, corals, hard planktons, shrimps and many more – all need those carbonate ions to build their shells.

Research on the effects of acidification on marine species in the open ocean is just getting started. Lab experiments had previously shown that the ocean's shell-forming creatures produce thinner shells in more acidic ocean waters, so William Howard is unlikely to surprise the 2,000 attendees in Copenhagen when he presents his findings. And no one knows at this point if the thinner shells are harming or affecting the forams.

However, scientists and policy makers ought to be alarmed to learn that Howard's planktonic forams play a crucial role in the sequestration, or storage, of carbon in the deep ocean, accounting for between 25 and 50 percent of the carbon transfer from the atmosphere to the deep ocean.

Each day, the oceans absorb 30 million tonnes of CO2 and if forams can no longer play their role in this carbon storage system then atmospheric concentrations of CO2 could skyrocket with calamitous effects on the global climate system.

And it turns out that forams have a particularly tough shell, utilising calcite – the most stable form of calcium carbonate and less sensitive to acidification. Many other shell-forming species that are vital parts of the oceanic food chain like pteropods utilise a carbonate mineral called aragonite and are likely to be more vulnerable to acidification, researchers warn.

Another new study has found that the larvae of clownfish – the bright orange and white reef fish – were unable to detect the odours from adult fish that led them to their breeding sites. This lab study shows that acidified waters that are expected before the end of the century affected the larvae's ability to follow odours, disrupting the breeding cycle of an important fish species.

The world's leading marine scientists are increasingly alarmed by acidification and its impacts. Last Jan. 30, they issued a warning to policy makers called the Monaco Declaration that states "acidification is accelerating and severe damages are imminent" and that corals will not survive in most of the oceans by 2050.

The declaration was a dramatic step for scientists, says signatory Victoria Fabry, an oceanographer at the University of California, Santa Barbara. "The potential is there for drastic changes in the oceans," Fabry told IPS.

There is a crucial need to alert policy makers and the public and to act soon. "We can make a difference by reducing emissions," she said.

"About two percent of the Gross World Product would need to be invested in energy production, efficiency and usage to reach the stabilisation target of 450 ppm, a cost considered to be tolerable by most economists," said Hermann Held of the Potsdam Institute for Climate Impact Research, Germany, who helped craft the Declaration.

Despite this modest investment, little is happening to substantially reduce emissions in virtually every country in the world. For that reason this week's climate science update involving experts from 80 countries is a deliberate attempt to influence policy, said conference organiser Katherine Richardson, a marine biologist at the University of Copenhagen.

This latest science paints a dire picture, from increasing ocean acidification to rapidly rising sea levels that will swamp most of the world's coastal regions before 2100, among many other impacts.

The hope is this climate science update will push policy makers to reach a significant emissions reduction agreement at the climate change negotiations at the end of the year in Copenhagen, Richardson has said in media reports.