MASERU, Mar 30 2009 (IPS) - The mountain kingdom of Lesotho faces a number of unique hurdles with regard to HIV and AIDS. 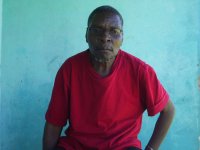 Former mine-worker Khoro Lati is being treated for drug-resistant TB: he is one of thousands of migrant workers whose health would be better served by cooperation between Lesotho and South Africa Credit: Kristy Siegfried/IRIN

The country is landlocked within South Africa, the epicentre of the pandemic, and because of limited job opportunities and high unemployment rates within Lesotho, many of its citizens work as migrant labourers in neighbouring South Africa.

This risk is combined with Lesotho having a particularly weak public health infrastructure due to rural isolation, lack of skilled health workers and high poverty rates.

IPS: Lesotho is landlocked within South Africa and as a result has many migrant labourers into South Africa, a country with a high HIV prevalence. What are Lesotho’s public health repercussions? Motumi Ralejoe: Migrant labourers, particularly all those working in South African mines, are a huge concern because they pose a high risk of having multiple concurrent partnerships [which increase the risk of spreading the virus] and of taking HIV infections across borders, between Lesotho and South Africa.

IPS: How are you tackling this issue? MR: We have launched major public information and awareness raising campaigns throughout the country to bring useful information to all our people. We have designed messages that are easily understood and provided in both our languages, Sesotho and English, to reach everyone.

In addition, we have launched educational programmes in primary schools and clinics countrywide, with particular focus on reaching the next generation of children and pregnant women.

IPS: Do you have cross-border health policies with South Africa? MR: The health departments of Lesotho and South Africa have an "open door" policy and talk from time to time to tackle issues around HIV jointly.

I am not aware of specific cross-border health policies between the two countries. We adhere to policies and declarations of the SADC [the Southern African Development Community] region to which both countries belong, for example to the SADC Health Protocol [of 1999].

IPS: Migration into South Africa and back has led to large numbers of Basotho defaulting from antiretroviral (ARV) and tuberculosis (TB) treatment. How do you prevent increased drug resistance? MR: South Africa often raises health questions first, and we learn about these issues through the media. We, as parliamentarians, pick up on these issues and relay them to our government. For example, when the first cholera outbreaks were reported in South Africa last year, we made sure that our health department is ready to deal with cholera crossing into our borders.

With regard to HIV and TB, we try to offer integrated health services, so that a patient who started ARV or TB treatment in South Africa can continue it in Lesotho. In addition, we place emphasis on educating people about the importance of adherence.

IPS: What programmes do you have in place for treating HIV/TB co-infection? MR: We do offer both HIV and TB testing in most of our public health facilities. Our biggest problem is that clinics have to send all blood samples to district hospitals, which means that it takes about a week to get results. That causes long waiting times for patients and some don’t come back for their results.

We are trying to speed up HIV testing by making finger prick tests [that don’t need to be analysed in a laboratory] available in rural clinics, so that patients can get their test results immediately.

Another key problem in Lesotho is that we have lost large numbers of skilled health workers, doctors and nurses, to South Africa and other countries throughout the world, mainly because of low salaries. We have to invest more money into training of new health workers to fill those gaps, and we need our health department to place emphasis on this.

IPS: Despite all these hurdles, you managed to decrease HIV prevalence from 31 percent to 23 percent. How did you achieve this? MR: Information and education have played a very important role. We ensure that prevention messages are spread at village level where the sense of community is very strong. As I mentioned before, we also target primary schools with AIDS education to raise an HIV-aware next generation.

I believe we could reduce HIV prevalence even more if we also managed to reduce poverty and hunger in Lesotho. If you have access to three meals a day and healthy nutrition, you have a better chance of staying healthier for longer.

IPS: Lesotho closely cooperates with China on HIV and other health issues. What are the benefits of this partnership? How did it come about? MR: Lesotho and China have been in business for many, many years, with China having moved into the textile business in Lesotho at a large scale. The Lesotho government opened its doors to China, a country with a huge economy that is flexing its muscle in Africa.

HIV prevalence in the textile industry is high, so China provides funding for HIV and AIDS care to the Office of the First Lady of the Lesotho government. The Chinese also offer scholarships so that Basotho medical students can study in China, and we have many Chinese doctors practising in Lesotho.