DEVELOPMENT-AFRICA: A Msg of Hope to Farmers

NAIROBI, Apr 10 2009 (IPS) - Mobile phones are being used to diagnose and treat crop diseases that cause massive losses to farmers, presenting an opportunity to increase yields as location-specific information about disease threats is made available. 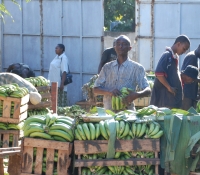 An initiative in two districts of Uganda, has community knowledge workers (CKWs) sending text messages to farmers in a given locality. The information may include how to arrest the diseases, and where to buy uncontaminated seeds, as well tips on how to improve soil quality to increase yields.

Aided by these mobile phone messages, farmers in a pilot scheme in the districts of Mbale and Mbusheni, in the east and west of the country respectively, have arrested the spread of banana wilt, a fast-spreading bacterial disease, and banana bunchy top virus through early diagnosis and treatment.

“We have trained the CKWs on how to use mobile phones to get information to the farmers. They offer agricultural tips and advise through the phones on what to do and not to do to control the diseases. Farmers even ask questions on wilt and BBTV and they receive automated answers on their phones,” Whitney Gantt of Grameen Foundation, a global anti-poverty organisation told IPS.

“[The initiative] has increased productivity because farmers have gotten to know where the diseases pose the biggest threat. They have then moved to take necessary control measures in good time before being affected, including getting information on where to get clean planting material,” she said.

Banana is the staple food in the east African country, and more than 10 million people depend on it for food as well as cash incomes, according to government figures. Since 2002, banana wilt, whose symptoms include yellow wilting and premature ripening in young plants, has been terrorising farmers and steadily spreading to other parts of the country. In March, authorities launched a national campaign to control the disease which has spread to 21 districts from only 11 last year.

According to Gantt, the mobile project is expected to be replicated to other areas across the country. She was among the researchers who gathered in Nairobi to discuss technologies that can generate location-specific (geospatial) information for farmers in order to boost agricultural productivity in Africa.

The spatial information experts met in Nairobi Mar. 31-Apr. 4 as part of African Geospatial Week, organised by the the Consultative Group on International Agricultural Research (CGIAR) a global body focusing on agriculture research.

Many small scale farmers in Africa still rely on little more than their instincts and past experience to decide which crops to plant. They lack access to information specific to their farm areas including type of soil, fertilisers, best seeds, climatic conditions as well as market prices.

Consequently, small holder farmers frequently have their crops and livelihoods wiped out by unexpected weather patterns or diseases. And they may not reap the full benefits of a good harvest if they don’t know the true value of their crops or where to sell them for maximum gain.

“This information could be known only to experts. The challenge is how do we get it to the farmers out there, and spot-on so that they can benefit?” Nadia Manning- Thomas, a researcher and outreach co-ordinator with the International Water Management Institute asked IPS.

Apart from mobile phones, Google maps technology can provide tonnes of farm-specific information to farmers. Using this technology, farmers can go online to see climate, soil, and fertiliser recommendations for their farms, as well as market locations and road linkages, which are crucial for transportation of their produce.

A project underway in Ethiopia is expected to capture data on road access, water points for irrigation, location of silos and market areas for use by farmers. According to Tesfaye Korme of the Regional Center for Mapping of Resources for Development, this information will definitely improve agriculture productivity and food security… if it can be readily accessed by farmers.

But the fact that the maps can only be accessed through internet – and a high-speed connection at that – presents a challenge given that access to the internet in Africa is poor, particularly in rural areas where almost all of Africa’s farmers live.

Some argue this situation should stimulate authorities to facilitate better access to internet for rural people. “The technology is there and Africa needs it. Governments should therefore take advantage of it so that we do not remain a technology-blind continent,” said Dr Peter Okoth of the International Centre for Tropical Agriculture.

According to Okoth, establishing village information centres, with at least one computer connected to internet may be one way of guaranteeing internet access in rural areas. Such a move is anticipated in Kenya which is due to start installing fibre optic cables for ensuring speedy and cheap internet connectivity from July this year.