ELIAS PINA/BELLEDARE, Apr 29 2009 (IPS) - Elias Pina sits in a fertile high mountain valley on the border between the Dominican Republic and Haiti. Twice weekly, the side streets fill with Haitians and Dominicans trading produce, used clothing, kitchen equipment and shoes. 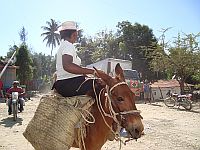 The merchants, predominantly women, pay a fee to the town for a place to sit and spread their merchandise. There is an occasional man selling low-end electronics, sunglasses, and pirated DVDs. Most of the men have tables while the women sit on the ground.

Juanita Duran, 48, comes down twice a month to buy because the used clothing here is cheaper than up in the northern market in Dajabon, Dominican Republic, where she lives.

Juanita returned to her native country after working for 18 years in the United States, taking care of the elderly. She speaks with mixed emotions of her life back there.

"Sometimes there would be 10 or 14 inches of snow on the ground. I left [for work] early, even before the stores were open, to make the train. I would sometimes work 12 hours a day. It was very hard work," she said.

"It is a country of laws there. You have security and police protection. My children live there now. One drives a cargo truck and one is in the military. I was treated well. But here I have a better life."

She now has a successful business buying and selling clothing and perfume from one market to another, although the Dominican government has just announced that it will be enforcing the existing law against the importation of used clothing, which, along with rice (originating in the U.S., and heavily subsidised), is now the primary trading commodity on the border.

"I buy things here and I bring things back with me when I visit the States – new clothes with the labels on, which sometimes sell for 100 dollars. Women are willing to invest in some good pieces. I buy perfume here that the Haitians bring. I have contacts down in Santo Domingo that I sell to," she said.

"It is hardly like work at all now, compared to the life that I had. I have so little stress." Juanita looks with pride over at her late model SUV in which she travels the four hours from her home to the market. "It is completely paid for. And I own my house as well. I could not live this well in America. Last year I made a profit of one million pesos (27,000 dollars). Profit, after expenses."

One of the Haitian merchants tells another side of the story. Maglie Joli is a "Madame Sarah," a walking saleswoman, who carries her merchandise in her arms. She sells underwear, socks, toothpaste, all brought from Haiti to sell in the market of Elias Pina.

She started her business with 35,000 Haitian gourdes (39 gourdes equal one dollar) but business has been so bad that now she only has 3,000 gourdes left.

A mother of three, Joli's husband works in agriculture. "I used to buy things here to sell in Haiti. But now there is so little money over there that no one can afford to buy so I stopped doing that. It costs me 100 pesos in transport to get here and some days I do not make that much."

"We are often abused, verbally and physically, by the Dominican men," she added. "I wish the authorities of both countries would pay more attention to the border."

Crossing into Haiti, after the border post, the paved road turns to dirt and rock, passable best by mule but also accessible by the motorcycle taxis which wait to carry passengers on the 15-minute ride into town. At the edge of the market, by the abandoned library, a loudspeaker broadcasts a French lesson. Here the merchants do not pay for their spaces.

As on the Dominican side, most of the vendors are women. The plentiful produce is primarily local. On this particular part of the border, which is rich agricultural land, there is work in the fields all year. However, because of the lack of advanced techniques and tools, Haitian agriculture is very low in production compared with the Dominican side.

The former large traffic in poultry and eggs has been stopped by an ongoing embargo by the Haitian state, imposed after an outbreak of H5N2 last year. Haitian women used to buy eggs on the Dominican side and carry them, in flats of 48 eggs stacked as high as 10, on top of their heads, into Haiti and resell them. Because of the loss of this revenue, there is little money on the Haitian side.

The embargo has not been lifted, although the bird flu virus has been reported under control on the Dominican side of the border.

Haiti is the Dominican Republic's fourth largest trading partner, with most of the exports going directly across the border in large trucks, destined for Port au Prince or other large cities. The border market mostly affects the local areas – and smaller merchants, primarily women.

Behind the display of powdered soap, Ivose Ange, 26, sits at a small charcoal stove, cooking slices of sweet potatoes to sell. She is the mother of four children, aged 4 to14, but has the support of her husband who drives a bus from Belledare to the capital.

Ivose stopped going to the market in Elias Pina after the embargo. "The Haitian customs authorities smashed five big cartons of eggs so I lost my day’s earnings. And I don’t go there because they abuse us. The Dominican guards take away our merchandise, the things that we bought, and the food that we bring in that we made in Elias Pina. Also we are charged too much tax," she said.

Gerda Pierre, a saleswoman, also 26 years old, has three sons, 17 to 4 years old. She used to buy and sell from the Dominican Republic. She bought different consumer products but now she only sells in the Haitian side. She stopped selling on the Dominican side because she says they are charging too much tax.

"I used to buy products in Elias Pina but in order to get the goods out of Dominican customs, they charge me tax. The same thing happened when I brought the products into Haiti, so I stopped trading across the border," she said.

*With additional reporting by Auguste Cantave.