ASUNCION, May 19 2009 (IPS) - Counting cases of machista or sexist violence separately shows that “what is happening is practically a genocide, and a hidden one at that,” says Susana Chiarotti, coordinator of the Committee of Experts on Violence (CEVI) which is following up on implementation of the Convention of Belém do Pará. 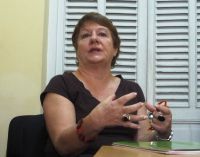 The Inter-American Convention on the Prevention, Punishment and Eradication of Violence against Women, adopted in the Brazilian city of Belém do Pará in 1994 by the 34 members of the Organisation of American States (OAS), defines all forms of gender-based violence as human rights abuses, and stipulates binding measures to eradicate it.

Chiarotti, an Argentine lawyer and long-time activist in the regional women’s rights movement, is also the coordinator of the non-governmental Latin American and Caribbean Committee for the Defence of Women’s Rights (CLADEM), which is active in 17 countries.

During a visit to Asunción, the coordinator of CEVI, which is part of the OAS but works independently, spoke with IPS about the progress achieved in recent years and of how much remains to be done to eliminate violence against women at all levels of society in Latin America.

IPS: How much progress has been made in Latin America toward the eradication of violence against women since the Convention was adopted? SUSANA CHIAROTTI: If we compare the situation with how things were 30 years ago, enormous strides have been made. To have a Convention and a follow-up mechanism, to begin to have integrated laws on gender violence and laws on domestic violence, is something.

From this perspective, the achievements are extremely significant, because cultural change is very slow and in 30 years we have achieved a great deal.

But now we have to make the leap to the second generation of laws on violence, covering every area. We also have to introduce new study modules in law schools that are more in line with reality today. These would provide effective tools and better-trained, more aware people who would not behave like cave-dwellers, as they still do in many arenas.

IPS: The Convention is seen above all as an instrument to combat physical, psychological or sexual violence against women in the family or in couple relationships. But what is its real scope? SC: The Convention says that states are obliged to prevent, punish and eradicate violence against women in the domestic, community and state spheres. So by signing Belém do Pará, the states committed themselves to take action in these other two areas as well.

When the Committee of Experts started its work, we had to analyse violence against women with all of the governments and identify common problems within a very broad range.

We found there were four: the legal framework, access to justice, budgeting and statistics.

We also found that most countries had enacted laws that only applied to the domestic sphere, and did not have integrated laws including the community and the state, as the Convention requires.

So there is a legal vacuum in the field of protecting women. One of the few countries that has passed an integrated law is Brazil. Most countries have neutral laws that refer only to domestic violence, with no protection provided in other areas.

IPS: What does violence against women in the community and state spheres consist of? SC: Violence in the community is very important because that is where we find media violence, perpetrated by the media when they reproduce discriminatory stereotypes, for instance, in advertising.

A very telling case involved Volkswagen in Brazil. A Volkswagen dealership in the state of Rio Grande do Norte, which also repaired cars damaged in crashes, ran a publicity campaign showing the face of a battered woman with the slogan: “Come and we will fix you up.”

When the Human Rights Association in that state and CLADEM protested to the dealership, a local journalist said: “These embittered feminists, who probably wear severe clothes and have moustaches and who have not known the glory of God, do not appreciate creativity and have no sense of humour.”

Volgswagen Brazil ignored the protest and the organisations took their complaint to the parent company in Germany, which immediately revoked its contract with the dealership and funded seminars with advertisers in order to dissuade them from making sexist ads or promoting violence against women.

This is what I mean by media violence. We have no tools to deal with it.

As for state violence, we must remember that in our countries democracy is in the process of being built, because we have come from dictatorships which left the seal of authoritarianism on many institutions, like the family, schools, hospitals, psychiatric facilities and prisons, where order or discipline are confused with authoritarianism.

We have to work to eradicate this sort of thing. For example, we have to work on obstetric violence, which is meted out to women who go to hospitals to give birth or for advice on sexual or reproductive health.

IPS: There are better and stiffer laws now in the region, but the figures on gender-based crimes are still alarming. What is needed for this situation to be overcome? SC: Femicide (a term for misogynist or gender-motivated murders of women) has to be fought from several different angles, involving the security forces, the media and sociological studies. It doesn’t necessarily need a specific category of its own in the criminal code.

Some countries like Costa Rica and Guatemala have already got specific laws on femicide in place. Other countries can make progress on femicide prevention by not encouraging violence against women, by not excusing it by making exceptions for violent emotions or honour killings or so many other reasons. So measures can be taken for preventing femicides.

IPS: How important is it for gender-based crime to be tallied separately? SC: This is a new and very important development. The observatories we are setting up throughout the region, to count how many women are killed by gender violence, are holding up a mirror to society.

Previously, they weren’t being counted, they were classified as crimes of passion and they were forgotten in time. Now they are being counted and we will be able to prove that what is happening is practically a genocide, and a hidden one at that.

If the same number of people were killed for belonging to a certain ethnic group or special group, for being black, Jewish or indigenous, people would react differently. But they are women, and unfortunately people are desensitised.

IPS: Are those in power, politicians and especially governments, doing their part? SC: Governments maintain an appearance of political correctness, and most try to show that they are well aware of the problem. I don’t know how much of what they say they really feel in their hearts.

No doubt we’ll have to wait a while until we have officials who are more committed, aware and sincerely concerned. Then we will have serious policies that are well-supported and funded.

IPS: How do women, the victims of the sexist culture that is so embedded in the region, cope with the problem? SC: Women are increasingly tougher and less tolerant of sexism and machismo. We are less inclined to collude with it and have greater solidarity with each other, although of course there are exceptions.

We can also model new roles for our daughters and granddaughters, provide models of women who are strong leaders. Thirty years ago there were hardly any women in the media, or female presidents or lawmakers.

Now we are portraying different models and creating our own genealogy. When men speak, they refer to a masculine genealogy. Now we women are validating ourselves and citing our own history.