FREETOWN, May 7 2009 (IPS) - Since the end of the civil war seven years ago, the Sierra Leonean authorities and child welfare agencies have been battling to remove children from the diamond-mining fields, a trend which began at the height of the conflict, when children were abducted by rebel forces and coerced to work in the mines. 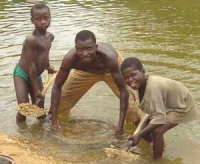 Mass poverty and unemployment are major factors pushing children and the youth to the mines. Credit: USAID

“It is now a major post-conflict problem and a threat to social stability,” remarks Patrick Tongu of the Network Movement for Justice and Development (NMJD), which monitors mining activities in the country.

“It highlights the government’s failure to meet its obligations under domestic and international laws to protect and promote the rights of children. This allows the development of deep socio-economic grievances amongst a large segment of the country’s post-war generation.”

Researchers from the International Human Rights Clinic, at the Harvard Law School, recently travelled through dozens of mining towns and villages in Sierra Leone to document the situation. They have just published their findings.

“The children and youth are faced with abysmal working conditions which put them at risk of accidents and diseases and expose them to collapsing mine pits,” remarks Matthew Wells, who is co-author of the report titled “Digging in the Dirt: Child Miners in Sierra Leone’s Diamond Industry.”

The report paints a horrific picture of slave labour, where children – some as young as 10 – transport bags of gravel weighing between 30 and 60 kilogrammes, on their heads, working from sunrise to sunset, often without proper food or medical care.

The government acknowledges the growing problem of child miners and the social problems it is causing, but insists it is doing its best to get them out of the mines. Last year, it passed into law gender and child rights acts, prohibiting children from being exposed to all forms of abuses.

But it seems the new laws are hardly enforced. Mass poverty and unemployment are major factors pushing children and the youth to the mines. Mining communities lack schools and trained teachers; and social services are few and far between. Most parents lack the financial means to send their children to school.

Teresa Vamboi, the chief social development officer at the ministry of gender and children’s affairs, told IPS it is a difficult situation: “We remove the children from the mines and, together with our partners who are involved with child welfare activities, try to send them back to school. Regrettably though, a good number of them return to the mines, which seem to be more lucrative to them.”

According to Vamboi, many of the kids have become bread-winners for their impoverished families. “They are encouraged by their parents to go to the mines and once they are there, it becomes very difficult to persuade them to quit completely.”

Tamba James, 15, lives in the eastern town of Koidu, the main heartland of diamond mining, in the West African country. He says he and his three siblings and lost both their mother and father during the war. They have no one to turn to for their livelihood.

“I have to go to the mines because that is the only place I can raise money to feed myself and two brothers,” James says.

“The job is difficult, from transporting gravel and digging the soil, to washing the piles of gravel. I do this from Monday to Saturday, week in, week out. It is not my choice but I have no alternative.”

He sets off at 6 am and works till 6 pm, with intermittent breaks. He admits food is meagre and poor and that they have no access to medical facilities.

The daily wages for child miners range from 500 to 2,000 Leones: approximately 15 to 60 U.S. cents a day. They are promised bonuses after a find, but exactly how much they get is at the whim of their employer.

According to Tamba and his peers, the mines’ sponsors typically give them just enough to buy CDs, sneakers and clothes and have some little amount left over to take home. The children nonetheless hope to make lots of money through their labour.

The exact number of child miners in Sierra Leone is not known but it is generally thought to be in the thousands, with the figure steadily rising. IPS saw hundreds of mine pits in Kono and Kenema districts in the east of the country, with dozens of children aged between 10 and 16 working in them. And although many hope to strike it rich, they often end up gaining nothing and losing everything: their youth, energy and education.

Not all diamond operators use children. The Harvard researchers found they are mostly recruited by artisanal miners who depend on children and youth as a source of cheap manual labour.

The industry, according to findings by mining activists including the NMJD and Journalists for Just Mining, is replete with corruption. They claim mines monitoring officials are often bribed to turn a blind eye to their activities. They say there is need for regulatory reforms both within the government and the mining industry if the system is to improve.

They are calling on the government to take immediate action to eliminate child mining, by better addressing the needs of both adults and children in mining communities. These needs include poverty reduction, education and health care for children.

Last year, President Ernest Bai Koroma set up a special task force to review the country’s mining laws and regulations. One of the issues to be addressed is that of child mining, according to the spokesperson of the force, Frank Kargbo.

He says the task force has been in negotiations with some of the multinational companies involved in the diamond industry and that a report would soon be published.

“Key to the report would be royalties paid to mining communities and the welfare of indigenes there. This will invariably include the issue of taking children and youth permanently off the mines,” Kargbo concludes.

The Harvard Law School report blames the government for failing to provide basic educational opportunities for children and youth, as well as social services in rural provinces. It surmises that this forces many children to turn to the mines, as a source of income for their families.

Wells says mining laws have been ineffectual so far because of complicity between mines officials who receive bribes from mines operators because of poor pay. No legal action has been taken against individuals who recruit children to work in the mines.

And so even with the review process by the Task Force, the future could well remain the same if the government does not take practical steps to tackle the problem head-on, by effecting arrests and closing down the minefields of those who flout the laws.