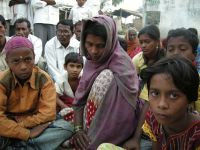 As the new head of the household, the boy-turned-farmer has adult responsibilities like the repayment of a bank loan of 190,000 rupees (roughly 3,960 dollars) that was the cause of his father’s death.

Digambar has dropped out of school, says his mother, Sunita, grief-stricken and burdened by the terrible tragedy the family has suffered. His older sister Roshni too has left school to take over the household work. The two younger children, a boy and a girl, are too young to work, says Roshni.

But everyone knows that it won’t be long before all four Rathod children join the ranks of Vidarbha’s baccha-kisans (child farmers). Here in six districts including Yavatmal, Wardha and Akola, thousands of cotton farmers have taken their lives due to mounting debts and a dramatic decline in farm incomes over the past decade or so, and their children have stepped into their shoes.

Ganesh Diliprao Kale in Ralegaon village, Yavatmal, was barely 13 when he became the eldest male in both his own and his two uncles’ families. Over a span of five years, between 2003 and 2008, his father’s brothers and father were driven by debt to suicide.

"Ganesh cultivated our farm last season with little support from relatives," says his mother Shalini. Her school-going daughter, Ashwini, 11, assists them on the weekends. She’s already taken over much of her mother’s work in the house.

A few miles away, in Khadakdoh village, in south Yavatmal, Kavita Kudmethe and her two daughters, around 13 years of age, scrape a living as farm workers. Her husband killed himself in 2007, and his parents threw Kavita and her daughters out of the house.

She knows that had one of them been a son, the family would not have turned her out. Girls are considered a social burden in India. The tension of finding a groom for their daughters has emerged as a contributing cause to the spate of farmers’ suicides, according to a 2005 study commissioned by the Maharashtra government.

Kavita hopes to marry her daughters off as soon as they turn 15 although the legal age of marriage for girls is 18. "That’ll relieve me of my burden," she says. Farm suicides in Vidarbha have robbed so many children of their childhoods.

Swati Thote, 12, shoulders the responsibility of domestic chores and tending the livestock while her mother Sarla works on their 4-acre farm in Kosurla village, Wardha. Swati's cotton farmer father committed suicide in December 2005.

At 13, Roshani Shete takes care of her mother, Shobha in Pimpalkhuta village, Amravati district. Her landless father took his own life, having accumulated huge debts for a farm he had leased. The girl, a constant smile on her face, does most of the chores, and goes to school without fail. "She’s become my mother," says Shobha.

But the smile may be hiding a deep emotional scar. Roshani has not slept soundly since her father’s suicide in October 2008, her mother says. The father and daughter were very close. In fact, she is terrified to sleep in his room in their tiny mud hut, her mother reveals.

"These children are inheriting debt, distress and emotional upheavals," laments Vijay Jawandhia, a sexagenarian farmers’ leader from Vidarbha. "The impact of the agrarian crisis on generations (within families) is terrible and has long-term consequences."

Dr Sujay Patil, a young psychiatrist in Akola has been offering free consultancy services to farmers showing signs of depression or mental illness from his home district of Akola. He says, "younger and younger farmers are turning up for medication as they are unable to cope with the pressures of agriculture and the new economic order."

According to Dr Shailesh Pangaonkar, a Nagpur-based child psychologist, "early maturing of children, who haven’t had time to mourn the loss of their fathers, could lead to a subtle depression throughout their lives." He advises that such children need "education, cultural involvement and economic stability, for healthy growth …"

For most rural families, especially in Vidarbha, this is a distant dream. Cotton farmers have been acutely affected by soaring input prices, declining incomes, lack of irrigation, and volatile global prices, among other things.

"I simply can’t support my daughters emotionally or feed them nutritious food," says Kavita, the dispossessed widow. "My daughters are as vulnerable to (sexual and physical) exploitation as I am," she adds in a resigned voice.

A random study of 20 children from suicide-affected households by this journalist in 2008 found them emotionally disturbed. While some were extremely aggressive, the others were very docile.

Saraswati Amberwar, in Telangtakli village of Yavatmal, says her second daughter, Jaishree has not recovered from the shock of her father’s suicide 10 years ago. "She is on medication, and has become silent and submissive, as if she’s dead from inside," she says.

In contrast, Prasheet Pethkar, 14, in Kurzadi village, Wardha district, spews abuse at his mother who he blames for the family’s problems and his father’s suicide.

"There should be government intervention," says Vilas Bhongade, a social worker and child rights campaigner in Vidarbha. "The impact of the farm crisis on children must be seen in the light of a child’s right to survival, protection, development and participation."

"These children desperately need emotional support," adds Prabhakar Nakade, a school teacher in Wardha and member of the District English Language Teachers’ Association (DELTA) which has experience with children from suicide-affected farm households.

"Though they work and support their families like adults, we must not forget they are just children," he pleads.