BUENOS AIRES, Sep 21 2009 (IPS) - For Argentina’s justice system to truly incorporate a gender perspective, more important than overcoming the male-female imbalance in the higher rungs of the judicial branch is providing gender-awareness training for judges of both sexes so that it is reflected in their rulings, experts say. 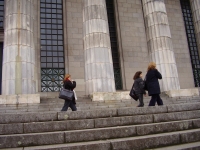 “We’re not satisfied with the number of women currently holding positions in the justice system, but if what we want is for rulings to have a gender perspective, then what we need to do is provide training for both women and men judges,” said Natalia Gherardi, head of Equipo Latinoamericano de Justicia y Género (ELA), a Buenos Aires-based non-governmental organisation that promotes the incorporation of gender awareness in public policies, focusing on the justice system.

In a conversation with IPS, Gherardi said that in Argentina, like in the rest of Latin America, the proportion of women occupying positions in the judicial branch “is not representative of the number of women who graduate from law school,” where for the past 20 years women have consistently outnumbered men.

However, few women law professionals make it to the highest-ranking positions in the judicial branch. In its 2005-2008 Gender and Human Rights Report, released on Sept. 7, ELA indicates that only 20 percent of the judges serving on the Supreme Court and the high courts of the country’s 23 provinces are women.

This figure does not reflect recent gains, such as the appointment of two women justices to the Supreme Court, or the setbacks in seven provinces – 30 percent of the country – where no women currently sit on the high courts.

The study’s findings show that there is “segregation” that keeps women judges in the lower courts or in areas of law traditionally associated with women, such as civil, administrative or labour courts. In federal and criminal courts, meanwhile, there are hardly any women on the bench, it adds.

“There would seem to be an invisible ceiling in the legal sphere,” the report says. “Although the majority of lawyers (in the country) are women, their numbers are not reflected in the judicial branch.” On the contrary, “the higher the court the fewer women we find on the bench.”

However, the study also warns of the risk of focusing only on achieving balanced representation of women in terms of numbers.

The authors examine the effects of the gender parity attained in parliament as a result of Argentina’s quota law – almost unprecedented at a global level for the number of seats it mandates for women – and are sceptical about claims that women’s interests are better represented as a result of the increase in female legislators.

“For reasons of democracy, women are entitled to occupy a greater number of seats in Congress, but that doesn’t mean that these female legislators will be passing the laws that women need,” Gherardi said.

Although the report fully supports women’s right to equal participation in every branch of government, it cautions that “numbers say nothing about the real degree of inclusion in public life or about how much influence women have exerted from their positions and the impact they’ve had.”

Gherardi said that if the goal in the judicial branch is to “have an effect on the way justice is dispensed, we need to provide male and female judges with gender-based criteria for their rulings.”

“We don’t need to have women allies to promote women’s rights; what we need are properly trained men and women judges,” she added.

The Gender Commission of the National Ombusdman’s Office is carrying out efforts to that end. All judges, public defenders and employees of the ombudsman’s office are required to complete a gender-awareness course, held every month by the commission.

Equality is not just a matter of numbers

“Having a woman on the bench does not guarantee a gender perspective,” Julieta Di Corleto, a member of the team that organises the courses, told IPS. “We have to train men and women to incorporate this perspective and apply it when they have to deal with cases of violence, for example.”

For Di Corleto, if a woman is charged with killing her husband it’s important that her actions be analysed in the context of gender-based violence. “Every effort must be made to prevent women in these situations from being revictimised and to eliminate biases; and this is something both men and women must do,” she said.

In this respect, ELA’s study indicates that the issue of female representation must not be merely a matter of achieving greater inclusion of women to meet a basic requirement of justice or democracy: it insists that anyone holding public office must also assume certain responsibilities.

When the Council of Magistrates – which oversees the judiciary – was created about a decade ago as a result of a 1994 constitutional reform aimed at bringing transparency to the process of appointing judges, women’s movements had high hopes that it would help break the invisible barrier that prevented women from accessing higher positions.

But a study by Paola Bergallo, a law professor at the University of San Andrés in Buenos Aires, found that the new selection system may have raised false expectations and has not really furthered gender equity in the justice system.

The Council selects judges and magistrates according to a system that combines the candidate’s merits with politically-based decisions. A committee formed by representatives of the three branches and a team of lawyers issues calls to interested candidates to compete for available positions, and applicants then go through a process of exams and hearings.

The members of this committee propose a short list of candidates to the president, who then appoints them in agreement with the Senate. “These mechanisms can discourage women candidates and affect the gender representativeness of the winning candidates, Bergallo told IPS.

“Many assume that these selection mechanisms, which combine a merit-based procedure with political appointments, could help to increase women’s participation in judiciary positions, but that’s not always so,” said Bergallo, in her study “¿Un techo de cristal en el Poder Judicial?” (roughly, Is There a Glass Ceiling in the Judicial Branch?).

“That presumption is based on the belief that for women it is easier to achieve professional experience than to win political favours. However, empirical evidence does not point conclusively in that direction,” she said.

Bergallo pointed out that the new procedure could be “biased towards male merits.” And “the great demand for more and more merits can end up discouraging women candidates,” she said, referring to graduate degrees, university teaching positions and publications that weigh in on the selection.

“The merit-based mechanism and supposedly gender-neutral approach combined with a lack of commitment on the part of the executive branch and the Senate to promote the appointment of women contribute to intensify gender segregation in the appointments of judges and more important decision-making positions in the judicial branch,” she concluded.

If, she said, instead of having this seemingly gender-neutral selection system, a fully political procedure were adopted with a commitment to further the incorporation of women, the results might be better.

“Political bodies are capable of remaining firmly committed to affirmative actions aimed at fostering a female presence in the judicial branch and promoting more appointments of women than the pseudo-meritocratic procedure,” she said.

“These two presidencies were committed (to promoting women in the judiciary) and an unprecedented number of women were appointed,” she said. But in Argentina if there’s a short list of candidates composed of two women and one man who have passed all the merit tests, according to Bergallo, the president – whether male or female – will most likely pick the man.

“Ultimately, I don’t think that the presence of a significant number of women in judicial decision-making positions depends on the mechanism for selecting judges, but on institutional commitments to promote truly equal opportunities for women,” she concluded.