NAIROBI, Sep 9 2009 (IPS) - The top policeman accused of supporting Kenya’s post-election violence, in which thousands were killed or raped because of their ethnicity, has been given a cushy job as head of the country’s postal service. 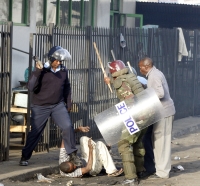 Few argue that police reform is not badly needed in Kenya; few are convinced by the reassignment of the Kenya Police’s top official. Credit: Frederick Onyango/IPS

President Mwai Kibaki’s announcement this week that the country’s former Police Commissioner Major General Hussein Ali would be replaced at the helm of the force and re-deployed to the Postal Corporation of Kenya has not been welcomed. (Ali’s former deputy, Lawrence Mwadime, has been given a post in the ministry of livestock development.)

Ali, a retired army general, headed the Kenya Police, responsible for such general police matters as criminal investigations and traffic control; the Administration Police takes charge of security for ministers, members of parliament and other top government officials.

Their public roles often overlap, and both branches stand accused of involvement in the violence that followed elections in December in 2007, the Administration Police playing a part in rigging votes and sowing confusion at polling stations and the Kenya Police directly participating in violence.

Despite the good riddance atmosphere around the country as a man largely seen as a ruling party militant is shuffled away from the top police post, Kenyans are cautious. Many feel that the changes that saw Ali replaced at the helm of the force on Tuesday are as shoddy as the general reform process itself.

For many Kenyans still recovering from the violence that saw as many as 1,300 people murdered, over 3,000 women raped and over 300,000 people displaced, the move is being seen as an evasion of justice.

The changes have largely been dismissed as a way to avoid prosecutions rather than a ‘departure from the culture of impunity rule’ in Kenya.

“We have been calling for reforms in this country’s police force for a while now,” said a shop owner in a popular street Nairobi.

“And this country has yearned for a total change that can usher in police leadership that is responsive; leadership that implements punitive ways of dealing with society needs.” He asked for his name to be withheld because he feared repercussions and claimed he is a victim of police harassment and extortion.

Post-election violence survivor Peter Kariuki says he suffered police brutality while in an IDP camp in Nakuru Show Ground, 200 kilometres west of Nairobi. He has accused police of kidnapping and torturing him while in the camp. His only crime was that he belonged to the outlawed Mungiki sect, which has clashed with government repeatedly since since it emerged in the 1980s.

He dismissed the notion that the construction of additional police stations around the country was the solution to the individual safety of Kenyans.

“No way. Police stations can not be my security. My security is myself and my neighbour,” he said.

A number of lobby groups welcomed Ali’s removal, but they strongly cautioned that further changes remain urgent. Speaking to IPS, Hassan Omar, vice chairman of the official rights watchdog mandated by the constitution, the Kenya National Commission on Human Rights, said that Ali’s removal should be a starting point to comprehensive reforms in the force.

“We trust the changes will set the pace for a rebuilding of public confidence in the police and create the necessary momentum for reforms,” he said but cautioned that this must be quickly followed with implementation of the recommendations of a Police Reforms Task Force headed by retired Judge Philip Ransley which called for an overhaul of the entire police force structure.

Omar called on Kenyans to ensure that the government fulfils its promise to reform the police force in totality.

The non-government Kenya Human Rights Commission, headed by Muthoni Wanyeki, also criticised the reassignments. Wanyeki called on the president to be careful with the issue of reforms bearing in mind that the country is waiting to see all senior officers of the force sent home.

“The writing is clearly on the wall that the president should stop playing games with the reforms issue as the country has already agreed that all senior police officers should be sent home to pave way for fresh leadership in the police force,” Wanyeki said.

The Union of Kenya Civil Servants (UKCS), which includes members of the police force, also dismissed the changes as a sham and public relations exercise.

UCKS Secretary General Tom Odege castigated the president, saying that the replacement of only one person cannot convince that the government is focused on reforming the police force.

“One person can not bring the required change in the police. Reforms in the force are not an act of performing miracles but a practical Kenyan-backed process,” he asserted.

Odege noted that by making a single high-profile change at the top, the president is more interested in preserving the status quo than answering to the desires of the whole country for deep-seated changes.