POLITICS-ITALY: Where Are the Women? – Part 1 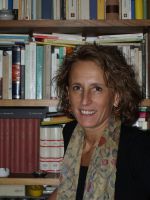 "The feminist movement in Italy has been strong… But in order for women to participate in politics as women, politics itself should change," says Luisa Capelli from L'Italia dei valori party (The Italy of Values). "Italian feminism has influenced party politics, especially those from the left. But it has been marginalised to the point that if you identify yourself as a feminist, you are looked upon with distrust."

Capelli, who is also the head of Meltemi Editore, a social sciences publishing house, has thought a great deal about the weak political presence of female politicians in Italy.

"There have been years of exposing women’s bodies, of daily belittling women’s talents," she tells IPS in an interview. And this is the result of the systematic vilification of women on television. "At least two of our (female) ministers have been chosen because their presence sexually pleases prime minister (Silvio Berlusconi)… Why should we be shocked? When two years ago a female student asked him for advice about her future, he suggested that she marry a rich man."

"The democratic development of Italy was interrupted by 20 years of fascism," she says. "The regime’s machismo was translated into laws that reduced women's rights even further. For example, women were forbidden to teach philosophy and history, considered the highest studies."

In spite of it, women had a key role in the fight against fascism, and created for themselves social and political spaces like the right to vote in 1946 and the divorce, abortion and family planning laws in the sixties and seventies. "But this thrust vanished in the following years, while the lack of ideas and initiatives has been replaced by the commercial Berlusconian TV," she says.

About 90 percent of Italian television is controlled by Prime Minister Berlusconi through his private media empire Mediaset and the state television RAI. He also controls publishing houses and other media.

Berlusconi's television "has disseminated a culture based on the obsessive valorisation of the woman's body," says Volpato. "It has imposed a model of a superficial woman. A woman whose main function is decorative. An object. A woman that doesn't exists for herself but through the eyes of men's… This model exists in other countries, but here it is the only model offered by mass media."

Today Italy – one of the powerful economies of the G8 – sits at the bottom of the list of European nations in the latest 2008 Global Gender Gap (GGG) index, published by the World Economic Forum. Only Czech Republic, Romania, Greece, Cyprus and Malta have worse gaps between women and men in Europe.

This is a serious issue. Denying women access to power is a "strategic waste", said Saadia Zahidi, co-author of the GGG report, in a previous interview with IPS. "The system benefits from more diversity in policy-making" when more women have access to politics.

A research authored by Esther Duflo from MIT (Massachusetts Institute of Technology) and Rohini Pande from Harvard, she said looked into gender quotas across Indian village councils and whether leadership was predominately in the hands of women or of men. In the first case, they found that the allocation of local budgets was devoted far more to education and health, whereas when the leadership was controlled by men it was directed towards consumer products, defence, cars, which are important but not fundamentally important.

"Men who are more than 50 years old occupy 55 percent of all positions in (Italian) Parliament, even if they are just 17 percent of the population," says Anne Maass, psychology professor at Padova University. "This concentration of power brings in risks by artificially reducing both the variety of issues confronted and the solutions proposed."

"Psycho-sociologic studies show that women are more inclined to share democratic values like equality, social responsibility and environmental protection, and less prone to accept a hierocratic structure in which a group dominates another and minorities are not respected," says Maass.

For Capelli, "it is not only a question of including issues that are dear to women. I know from my teaching at university that women speak differently before other women. Confronted by only men, they will probably change their approach, rather than the opposite. A bigger female presence is a way of guaranteeing women offer the best of themselves."

Italian women make 51.4 percent of the population and 55.8 percent of university students. But their political and economic power is way, way below equality lines.

According to the GGG Index, Italy ranks at number 67 out of 130 countries in terms of health, education, and access to economic and political power for women (Norway being number 1, with the narrowest gap between men and women). If we examine only the issue of access to political power, Italy fares better at number 46. However, that position is still below countries like Bangladesh (13) and Mozambique (17), and far worse than most of its European counterparts.

Italians are less comfortable with women leaders than the average European, according to the survey 'Discrimination in the European Union 2008' published by Eurobarometer.

Psychology professor Maass thinks that the prejudices against women are part of the wider problem of discrimination. "This doesn’t shock you if you think about the systematic propaganda of sexism, racism and homophobia that Italians have been subjected to on television for more than 15 years," she says.

"But it is also true that, in absolute terms, most of the population doesn’t have a problem with a female head of state, according to the Eurobarometer, in contrast with the parties, who nominate few women," she says. "In 63 years of the republic, no woman has been the head of a party, or premier or president; no woman has been in charge of any of the four most important ministries (foreign affairs, economy, internal affairs or defence). So, it is the parties, not the people, who have a problem with female leadership."

Last June, during the European elections, merely 19 percent of the elected candidates were women (only Cyprus, Malta and Poland had a poorer female representation, according to the Italian National Institute of Statistics, known as ISTAT).

Capelli was a candidate, but she failed to be elected.

"In the lists of L'Italia dei valori, about 30 percent of the candidates were women. But out of our seven elected European parliamentarians, only one is a woman. This is also the case for other parties, or worse. It is a complete disaster… (As female candidates) even if we weren’t discriminated against, we weren’t placed by our parties in the best spots to be elected."

"I was for a long time against quotas… But from my experience at university, I’ve understood that numbers make a difference," says Capelli. "In Italy the law states that female presence in the party’s lists should be no lower than 30 percent, but women do not get elected. They rarely lead those lists. The presence of women inside institutions should be reconsidered (in quotas)."

Maass also thinks the fact that less than 50 percent of the population controls more than 80 percent of the institutions "needs a decisive corrective intervention" in the form of quotas.

For Maass, the most effective method would be that of the "zipper quota", where women are put in every second place on the candidate lists, she says.

"But this will never happen in Italy," she adds, because women who could promote it in the Parliament are ridiculously few and face the opposition of the majority of men. When in 2006, they tried to pass a modest 30 percent quota, the attempt ended in insults like those of Pippo Gianni, of the UDC (the mighty Christian-Democrats Union), who famously said, 'women shouldn’t bust our balls'."

Much more has to change inside politics, according to Capelli. "A system that doesn’t reward merit, but the ability to move in a masculine power structure only punishes women… For me, politics is the ability to negotiate and transform principles in collective actions. If politics is reduced to mere power fighting, there is only one group that has the resources to do that."

"Not women." (*Miren Gutierrez is IPS Editor in Chief.) (This is the first of two-part series on women in Italian politics.)