BUENOS AIRES, Dec 21 2009 (IPS) - A study by more than 30 experts from Argentina, Bolivia, Brazil and Paraguay warns of the threat menacing the survival of fish species and 50 riverside settlements in the Río de la Plata basin, which is the second largest river system in South America after the Amazon basin and contains a wealth of biodiversity. 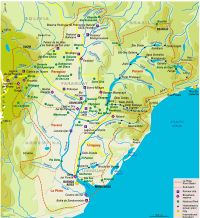 “We wanted the governments of the countries in the La Plata Basin to have a tool for their natural resource managers, so that they would be aware of the threat hanging over these species and take measures for their conservation,” biology professor Julieta Peteán, one of the study’s authors, told IPS.

The study reports research on biological aspects of the La Plata Basin, which contains some 220 fish species, but also analyses socioeconomic effects on local communities, as well as existing legislation. There are 130 million people living in the basin, including 20,000 artisanal fisherfolk who live in 50 urban centres, ranging in size from small villages to cities.

It was coordinated by the South American regional office of the International Union for the Conservation of Nature (IUCN). During the first stage of the project, which has taken two years, experts focused on Argentina and Paraguay, but they intend to extend the research to the other countries in the basin: Bolivia, Brazil and Uruguay.

The La Plata Basin spreads over 3.2 million square kilometres and includes the Paraguay, Pilcomayo and Bermejo rivers, and particularly the Paraná and the Uruguay rivers, the confluence of which forms the Río de la Plata estuary. The biodiversity of fish species is threatened by overfishing, dams, badly planned road and water transport routes, intensive agriculture, deforestation and fires.

Out of the 191 fish species assessed in the study, 11 are threatened. Some of these are migratory fish species like the pirá pitá or river salmon, which are blocked from their breeding grounds by dams.

Insufficient data are available for another 50 fish species. “This is the case of rare species that are not well known to science,” Cristina Morales, the coordinator of Guyra Paraguay’s species programme, told IPS.

“Rare species are generally much more vulnerable to extinction than common ones,” she said.

“Owing to their small population size, natural catastrophes and random disasters have a more serious effect on these species, and given the lack of information about their habitat needs and natural history, plans for conservation action cannot be drawn up for them,” the expert said.

Six of the species analysed are highly prized for commercial and angling reasons. They include the sábalo (shad or river herring), Argentina’s major river fish export; the golden dorado, a trophy fish for anglers; speckled catfish, tiger catfish, pacú (a flatfish related to piranhas) and manguruyú (gilded or giant catfish), classified as a vulnerable species by the experts – only a step away from being considered endangered.

“Processes leading to habitat fragmentation, the construction and operation of dams, alteration of river flow patterns, deforestation, introduction of exotic species, water pollution and fishing pressure, all have a negative effect on fish stocks,” the study says.

The authors recommend more research, conservation laws, management plans and regulation of catches. Morales added that “it is essential to coordinate the actions and strategies undertaken by the governments responsible for the distribution area of threatened species.”

In her view, assessment is only the first step.

As well as contributing to the maintenance of fish stocks, the researchers aimed to “contribute to the quality of life of the local communities that depend on fish resources,” by involving fisherfolk in species monitoring and developing the capabilities of these communities, who have the most to offer to sustainability in the basin.

The study highlights the interdependence between natural resources and the poorest riverside communities. “Low-income social sectors are highly dependent on natural resources, so that degradation or loss of access to these have a serious impact,” it says.

The authors stress that the La Plata Basin “should be valued highly and managed responsibly by society and governments, to make it an important source of sustainably-derived financial resources.”

And they add: “Traditional fishing activities for various purposes, such as food and livelihoods for families, tourism and recreation, sporting events and trade for the domestic market, are an essential element that contributes to food security, a source of foreign exchange and a key driver of regional economies.”