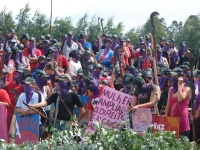 According to critics, corporations are logging natural forests in these South American countries and transforming their grasslands to plant eucalyptus, pine and other non-indigenous fast-growing trees – which consume enormous quantities of water and degrade the soil – to develop large-scale wood, pulp and paper production.

However, in view of the coming Fifteenth Conference of the Parties to the United Nations Framework Convention on Climate Change (COP15), to be held in Copenhagen on Dec. 7-18, forestry companies are saying that afforestation can play a role in mitigating global warming by absorbing carbon dioxide, the main greenhouse gas.

In the last few weeks, rural women’s organisations and environmental groups in the region tried without success to make themselves heard above forestry companies. With this aim, they issued a joint statement in the framework of the Thirteenth World Forestry Congress, held Oct. 18-23 in Buenos Aires.

This event, generally held every six years since 1926, is organised by the government of the host country under the auspices of the United Nations Food and Agriculture Organisation (FAO). This year’s edition brought together some 7,000 participants, including government delegates and representatives from the private sector, students, experts and members of environmental organisations from more than 160 countries.

Under the theme “Forests in Development: A Vital Balance”, participants discussed topics ranging from bio-energy to climate change, sustainable development and the need for synergies across sectors to identify green solutions to the global warming crisis, and concluded that forests – including tree plantations – can contribute to curbing greenhouse gas emissions.

In an interview with IPS, Claudia Peirano, of the Argentine Forestry Association (AFOA), an industry group, contended that naturally-occurring forests can no longer be sourced to cover the growing demand for wood, and that instead harvested forests must be expanded.

“The loss of native forests is not caused by forestry plantations; it is the result of agricultural expansion,” Peirano said, underlining that only three percent of the world’s forests are harvested. According to forestry companies, this surface area needs to be expanded to adequately respond to demand without fuelling deforestation.

In this sense, the Congress ended with “a clear consensus on two goals: achieving zero deforestation by 2020, and finding alternatives for greater yield in wood production,” Peirano said.

But the women who issued the statement disagree.

“We, rural and urban women, reject the expansion of monoculture tree plantations and pulp and paper production projects, which have especially affected the grassland ecosystems of Argentina, Brazil and Uruguay,” they declared in their statement.

Promoting plantations as forests is “misleading,” said the rural women’s organisations and environmental groups, which pointed to the “countless negative impacts” that these projects have on the lives of rural families, and particularly on women, who are “disempowered” by the expansion of these single-crop plantations.

Among the many negative aspects of the “unsustainable” development model followed by the forestry industry, they denounced that companies pressure families into selling their farmland, that the industry creates few jobs for women, that tree plantations are depleting water resources, and that these changes have significant social impacts, such as a breakdown in the social fabric, leading to domestic violence and sexual harassment among the affected communities.

The document, ignored by the participants in the Congress, is signed by the World March of Women (WMW) – an international feminist action network that combats poverty and gender violence -, the Peasant Women’s Movement of Brazil, the Brazilian chapter of Friends of the Earth (FOE), and the Centre for Environmental Studies.

On behalf of Argentina, the statement was backed by GRAIN, a grassroots organisation that works to stem the expansion of soybean monoculture, and on behalf of Uruguay it was supported by the local FOE chapter, the Rural Women’s Movement and the World Rainforest Movement (WRM) – an international network based in Montevideo.

Interviewed by IPS, Cintia Barenho, a biologist and environmentalist with WMW, said that the Brazilian states most affected by eucalyptus, pine and black acacia monoculture plantations are Bahía, Espírito Santo, Rio Grande do Sul, Minas Gerais, Paraná and São Paulo, in the country’s eastern and southern regions.

While no data is available to determine the exact extent of this expansion, it is estimated that more than five million hectares in Brazil are covered with tree plantations, which have replaced natural forests and grasslands.

The advance of the tree plantations has also affected the livelihoods of rural families, indigenous peoples and “quilombola” communities (Afro-Brazilian settlements originally established by runaway slaves before abolition in Brazil), dispersing them and pushing them off their lands.

For example in Espírito Santo, the Aracruz Celulosa company has planted 128,000 hectares of eucalyptus on indigenous and quilombola territory since it launched its agro-industry project in the area decades ago. According to an investigation by WRM, of the 40 villages that existed, only seven are left, and of the 100 quilombola communities formed by 10,000 families, only 37 remain with a total of 1,200 families.

Women interviewed for the study – which resulted in the book “Brazil: Women and Eucalyptus: Stories of Life and Resistance” – said they had suffered severe droughts, abrupt temperature changes, severe loss of biodiversity, food crop reduction, drying up of water sources, and degradation of soil fertility.

Peirano, representing the forestry industry, conceded that “any intervention entails an impact,” but said “there’s a great deal of myth” in the claim that harvested species demand excessive amounts of water. “If you plant eucalyptus in an area with an annual rainfall of 800 millimetres, the trees won’t tap the groundwater,” he said.

Barenho underscored that in rural areas of these Brazilian states, “a lot of pressure is placed on families to sell their land to pulp and paper companies,” which “fuels the exodus of rural populations” to the cities, driving up unemployment, poverty and violence.

She also said that this situation represents a step back for agrarian reform efforts and dampens the development of family agriculture. Monoculture plantations “generate few jobs for local communities and women; the numbers are negligible,” she added.

Moreover, working conditions are precarious, and labour contracts are temporary. Barenho pointed to the social impact of the tree plantations, as the gender division of labour imposed by the industry – with women working primarily in greenhouses, under exploitative conditions, and men joining work gangs that move to different sites on the plantations – breaks up families, spreads prostitution and generates rampant sexual harassment.

Barenho is currently heading a study on the impact of forestry plantations, entitled “The European Union’s Role in the Disempowerment of Women of the South through the Conversion of Local Ecosystems into Tree Plantations”.

Raquel Gilmet, of the Uruguayan Rural Women organisation, spoke with IPS about the impact of these single-crop plantations in her country. “Small family farmers like me are surrounded (by these tree plantations), leaving us with nowhere to go. Trees are closing in on people,” she said.

Uruguay has an estimated million plus hectares of harvested forests. That total may not seem like much compared to the country’s total surface area of 17.6 million hectares, but it has a significant impact on natural ecosystems, say the rural women’s organisations and environmental groups.

Gilmet used to have an organic garden in the southeastern province of Soriano, but said that now “clean farming is impossible” due to the expansion of soybean monoculture – which requires heavy use of agrochemicals – in the area, which has swallowed up grasslands.

Outside of the city of Mercedes, the capital of Soriano province, forestry plantations are depleting water sources and degrading the soil.

“It’s alarming how (these plantations) have expanded here. You see more and more farms ruined and abandoned. The government says it was the farmers’ choice, but it’s doing nothing about the long-term consequences this has for water and soil,” she complained.

Gilmet said that forestry is promoted as “an alternative job opportunity” and at first “people are won over.” But then they realise that there are jobs for only a few men. “Women are left behind, alone with their children, with little money, and many end up poor and are forced to migrate to the cities,” she said.

To combat climate change “we need to cut emissions drastically in every country, find alternative energy sources and protect forests, not dwell on how to offset emissions,” she said to IPS.

Tree monocultures have grown by more than a million hectares in Argentina, and a significant expansion is projected for the coming years, under the auspices of the government, which accepts the idea that harvested forests contribute to combating climate change.

According to FAO data, 13 million hectares of forests are felled every year around the world. This deforestation causes more than 17 percent of the greenhouse gas emissions responsible for heating up the atmosphere and altering the global climate. Brazil is one of the largest emitters of gases from deforestation and loss of grasslands.