AMMAN, Apr 22 2010 (IPS) - Earlier this month, a 33-year-old man was charged with hammering his wife to death and dumping her body on the highway leading to the Queen Alia International Airport. The husband confessed to murdering her ”to defend his honour,’’ as she was meeting a male friend. 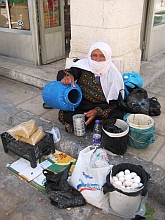 Bedouin woman from the city of Zarqa. Credit: Mona Alami/IPS

Also this month local newspapers ran a story about a man allegedly shooting and killing his Moroccan wife and her sister, and injuring her lawyer in the Ain Al Basha area. The wife had filed for divorce and was on her way to court with the lawyer when she was attacked.

“There are about 12 honour crime cases every year in Jordan,” estimates Diana Shalabi, director of the complaint office at the Jordanian National Commission for Women (JNCW). “However, many crimes involving women are categorised falsely as honour killings and should be called regular crimes instead,” she adds.

Honour crimes are considered acts of violence perpetrated by family members against females who are perceived to have shamed the family. The Jordanian penal code currently includes provisions justifying honour crimes to some extent by allowing leniency in such situations.

“Tribes also exert pressure on families to drop any civil suits, which can shorten a murder sentence from 15 years to less than one,” explains Dania Hjouj, a lawyer at the JNCW. Under Jordanian law, murder cases often bring on a trial in the criminal courts as well as a civil suit filed on behalf of the victim.

According to Shalabi, about 49 percent of all complaints received by the centre are related to domestic violence. Females are also often victimised financially. “Many women are imposed with financial restrictions by their families,” she says.

Under Islamic Shariah law, women in Jordan inherit less than male relations and are often pressured into giving up their inheritance to male family members. As a result, less than four percent of all property in Jordan is owned by women.

Divorces aggravate women’s rights in the country and often they are left penniless if not supported by their families.

“The situation is worse in the Christian community, as there is no financial protection guaranteed for women in case of divorce (unlike Muslim law, in which a prenuptial agreement is part of the marriage contract),” complains Anna, a member of the Catholic community in Amman.

Christian sects form about five percent of the Jordanian population, amounting to about six million people.

To tackle the problems facing women, Hjouj says that in recent years the government has revamped the judicial system. “For example, a new law has been drafted to force men to pay alimony for three years instead of six months, which was previously the case,” she says.

Another law is underway to create a mandatory fund for divorced women, which would guarantee a settlement from a former husband. Also in the pipeline are amendments to the Personal Status Law regarding child custody, which currently follows Shariah law and recognises the father as the legal guardian of children after they reach seven years of age.

“Over the past few years, we have pushed to change the law so that children can stay with their mothers until the age of 12, and we are now trying to increase the age limit to 15,” says Hjouj.

In addition to personal grievances, women also face discrimination at the professional level in the business world. “Men are often paid higher salaries and given more promotions than women in the workplace. This trend is further exacerbated in the private sector, where disparities in wages can reach as high as 44 percent,” underlines Shalabi.

In response to such issues, the government has begun to introduce new legislation to regulate inequalities. In 2009, parliament approved article 15 of CEDAW (Convention on the Elimination of All Forms of Discrimination against Women), which guarantees equality in legal and civil matters, more specifically concerning the mobility of people and freedom in choosing their place of residence, relieving women from the obligation to live with their parents or husband.

The newly drafted law unsurprisingly spurred protest from Islamic movements around the country.

As more progressive policies are adopted by the government of King Abdallah, inequalities between men and women will decrease in the near future. Newly enacted laws have imposed a 20 percent quota for women in municipal elections, while six of the 110 parliamentary seats are reserved for women with plans to double that figure to 12.

Women across the kingdom are expected to benefit further from the gender-responsive budgeting initiative launched this month in Amman.

The aim of the new policy is to offer equal opportunities to women and men in government jobs whereby training, assignment and other considerations for women are taken into account while allocating the budget for each government branch.

“Policies toward gender equality have certainly changed for the better in recent years,” says Anna. “However, outside the safe haven of Amman, chauvinistic mentalities are pretty much the same.”