LIMA, Apr 16 2010 (IPS) - One of the three public hearings held this week in Lima by the Inter-American Court of Human Rights discussed the responsibility of the Paraguayan state for violations of the right of indigenous communities to collective ownership of their land. 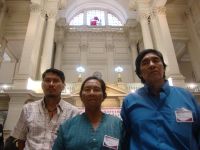 Paraguay is the Latin American country facing the largest number of complaints in the Inter-American Court regarding failure to respect indigenous land rights.

Three members of the Xákmok Kásek indigenous community set forth their case before the Court Wednesday in Lima.

The community, which is demanding the return of 10,700 hectares in western Paraguay, argues that they need their traditional land to maintain their way of life, which depends on hunting, fishing and gathering wild fruits.

The land in dispute, in the west-central province of Presidente Hayes – which has one of the highest concentrations of Amerindians in the country – was gradually sold off to ranchers, and indigenous people were crowded onto increasingly smaller areas of land. “We’ve been corralled,” Marcelino López, a Xákmok Kásek community leader, told IPS.

López has spent 35 of his 48 years fighting for the land rights of his community, which has shrunk to 61 families made up of just under 300 people.

“Many have moved away because it’s so hard to live like this, as farmhands for the ranchers, without clean water or health services,” said Maximiliano Ruiz, an indigenous teacher who testified before the Court.

The Xákmok Kásek live in the semi-arid Chaco region, a vast area of dense, scrubby forest that covers western Paraguay and parts of Bolivia and Argentina. Their community is 370 km from Asunción, the capital.

They live in rudimentary huts and have problems with access to clean water, medical care and education. López explained that the nearest health centre is over 100 km away, while the small school – donated by a private institution – is just a thatched-roof open-sided construction.

The children are undernourished, and there are cases of tuberculosis, diarrhoea and Chagas disease (a tropical parasitic illness).

“We have to walk so far to get water; it’s hard to care for the kids,” 60-year-old Antonia Ramírez, who raised 10 children, told IPS.

The Xákmok Kásek belong to the Sanapaná (also known as Enxet) people, one of the 20 native groups in this landlocked South American country of 6.7 million, where indigenous people number just over 108,000, or two percent of the population. Besides tiny white, black and Asian minorities, the rest of the population is of mixed European and indigenous descent.

The Xákmok Kásek brought their case before the Inter-American Commission on Human Rights (IACHR) in 2001, with the support of lawyers with Tierraviva, a non-governmental organisation that is helping the community with its land claim.

The IACHR declared the case admissible two years later, and in July 2009 referred it to the Inter-American Court on the grounds that the state’s failure to give the indigenous group access to their land has aggravated their vulnerability in terms of food security and health care, while threatening their very survival.

The Inter-American Court notified the Paraguayan authorities, and the two sides presented their evidence and arguments and met face to face Wednesday in the Peruvian capital before the Court’s seven magistrates, led by Peruvian justice Diego García-Sayán.

In representation of the victims, Maximiliano Ruiz and Antonia Ramírez gave their testimony and responded to questions from the representatives of the Paraguayan government and the Court. The president of the National Indigenous Institute (INDI), Lida Acuña, presented the government’s case.

Other aspects of the damages caused to the native community were described by anthropologist Rodrigo Villagra and Dr. Pablo Balmaceda, who said 40 people in the community had died in the past 20 years as a result of the poor living conditions and due to the lack of the most basic medical care.

The Tierraviva attorneys expect the Court to hand down its ruling in July 2011.

In 2005 and 2006, the Inter-American Court issued two sentences against Paraguay and in favour of the Yakye Axa and Sawhoyamaxa communities, instructing the state to restore their land to them within the space of three years. But neither ruling has been complied with so far.

“Three sentences against a state should be a serious problem that requires a response from the authorities,” the victims’ lawyer, Julia Cabello, told IPS. “These rulings are binding, but the institutional reforms that would make compliance possible have not yet been carried out.”

INDI’s Acuña told IPS that the Paraguayan government “is in the process of meeting” the native groups’ demands, and that it has acquired over 15,000 hectares of land so far, to be restored to the communities.

In 2008, the Xákmok Kásek community moved to an area known as 25 de Febrero, thanks to an agreement with another community that granted them 1,500 hectares in a gesture of solidarity.

Acuña said the government of Fernando Lugo – a left-leaning former Catholic bishop who took office in August 2008 – is working on granting the Xákmok Kásek legal title to the land, but the community insists that under the constitution they have a right to 100 hectares for each family, rather than the 20 they have been given.

“We’ll have to buy adjacent land, but the ranchers don’t want to sell,” Acuña said.

Paraguay is the Latin American country with the greatest concentration of land ownership. According to the last national agricultural census, a full 77 percent of the country’s fertile land is controlled by just one percent of all landowners. Meanwhile, small farmers, who represent 40 percent of the population, own a mere five percent of all farmland.

The conflict over the land claimed by the Xákmok Kásek heated up because in January 2008, the administration of Nicanor Duarte (2003-2008) declared part of the Salazar estate, which overlaps with the land in dispute, as a private reserve for a period of five years, which means it cannot be expropriated by the government (in exchange for payment).

“The problem is the conflict between the right to individual property and the right to collective land ownership,” Abraham Franco of the Attorney General’s Office told IPS.

“Our struggle is not a new thing,” said Xákmok Kásek community leader López, who questioned why the estate was declared a protected wilderness area when the native group’s claim to the land has international backing.

Under Law 352/94, private wilderness areas cannot be expropriated while their status as protected areas is in effect. Cattle ranchers in the Chaco frequently take advantage of these provisions to avoid expropriation.

The community first filed a formal claim to their land in 1986, and the lack of response from the authorities prompted them to bring legal action in 1990. Since then the land has been in the hands of several different landowners, and part of it has been cleared to make way for various cattle ranching establishments.