CAIRO, May 3 2010 (IPS) - Saeed El-Masry was born poor, raised poor and, unless he can get ‘kosa,’ will probably die poor. Kosa is the Arabic word for zucchini, but it also means someone in a position of power who can open doors to gainful employment. 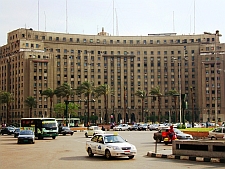 Mogamma Building in Cairo, where over 18,000 civil servants are employed. Credit: Cam McGrath/IPS

“There are no good jobs unless you know a cabinet minister or pay off a high-ranking official,” El-Masry resigns. “That’s the way it’s always been in Egypt.”

Nepotism is a glaring facet of the Egyptian workforce, research has shown. Nowhere is it more apparent than in the bloated public sector, where landing a job often has more to do with who you know than your career qualifications.

“Social background and networks are part of the selection criteria,” Transparency International (TI) said in a report released in March.

The Berlin-based corruption watchdog said parliamentary representatives of the ruling party are granted a hiring quota for their relatives in government entities and state-owned companies. Officials also exploit various loopholes in recruitment procedures to secure jobs for their friends and family.

“Temporary employment has been abused by some officials who use it as a back door to hire their relatives and acquaintances,” the report said.

More than a third of Egypt’s 25-million-strong labour force is employed in the public sector. About 5.7 million Egyptians work in civil service, while another 1.3 million are employed by state-owned companies.

Despite dismal salaries government positions are in high demand for their job security, health benefits and pensions. Short working hours also give civil servants the opportunity to return home early to their family or moonlight in the private sector.

National employment regulations require all public-sector job vacancies to be advertised in newspapers and on the Internet. The results of the selection process must be publicly announced.

“I’ve responded to the ads many times but have never received a call back,” he complains.

Even if Raouf does land a job, without kosa his meagre earnings would probably keep him in poverty. The minimum monthly salary of an Egyptian government employee is just LE 289 (53 US dollars) when bonuses and incentives are factored in.

“Government employees consider bribes as part of their income,” says Negad El-Borai, a rights lawyer and civil activist. “If a person works in the courts, for instance, [the government] gives him LE 500 (91 dollars) per month as a salary and closes its eyes to the thousands he takes as bribes. If you want to photocopy a record, or retrieve a court document, he asks ‘how much is it worth to you?’”

“Likewise, if you park your car in the wrong place a soldier will demand baksheesh (a gratuity) – and you give it to him. Why? Because the government pays him LE 200 (36 dollars) a month and leaves him to collect his income from the people.”

El-Borai says any attempt to root out corruption must begin with wage reform – raising the minimum wages while addressing glaring disparities in pay. Appointed top-level officials receive salaries that dwarf those of lower-echelon employees, whose advancement is obstructed – unless they have kosa – by a rigid seniority system.

In 2005 it was revealed that Ibrahim Nafie, former chief editor of state-run ‘Al-Ahram’ newspaper, had been drawing a salary of over half a million dollars a year as well as millions in benefits and kickbacks. At the time the newspaper was drowning in debt and staff working several floors below him were receiving near-minimum wage.

“It’s unfair that in the same institution you will find one person making millions while another earns just a few hundred a month,” says El-Borai.

Public sector wage reform has been at the top of the government’s agenda for years, but with little to show for it.

The National Council for Wages, formed in 2003, has been unable to agree on a new minimum wage that accounts for the exorbitant rise in prices since the old one was set at LE 35 (6.50 dollars) a month in 1984. Meanwhile, high-level officials have reportedly undermined every attempt to reduce the salaries of top government posts.

“The fortunate few at the top are happy with the status quo,” says Raouf.