Q&A: Justice in Guatemala – A Child That No One Helped Learn to Walk

GUATEMALA CITY, May 18 2010 (IPS) - In Guatemala, “justice was like a child just starting to stand up” when the 36-year armed conflict came to an end, but no one helped it “learn to begin to walk,” says Jesús Tecú, who will be awarded a prestigious international human rights prize Wednesday in New York. 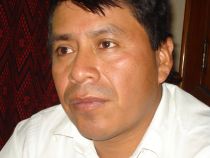 Tecú, a survivor of what the United Nations labeled the genocide of Mayan Indians in this Central American country, was selected among more than 50 outstanding human rights defenders from around the world by the New York and Washington-based Human Rights First, for the 2010 Roger N. Baldwin Medal of Liberty.

In March 1982, when he was 10 years old, Tecú witnessed the slaughter of his family and hundreds of other people in Río Negro, a remote village in the province of Baja Verapaz in Guatemala’s central plateau region, north of the capital.

The string of massacres of native villagers in that area by government forces and paramilitary groups in the early 1980s became one of the most high profile cases after a peace agreement brought the civil war to an end in 1996.

According to the United Nations-sponsored Historical Clarification Commission, the conflict between state security forces and left-wing Guatemalan National Revolutionary Unity (URNG) guerrillas claimed around 250,000 lives, 93 percent of them rural indigenous villagers killed or forcibly disappeared by the military and paramilitary “civilian self-defence patrols” (PACs) set up by the army.

Having survived the appalling scorched-earth campaign carried out by the military regime in the early 1980s, when hundreds of villages in the country’s highlands were destroyed along with their indigenous inhabitants, and experiencing first-hand the impunity enjoyed by the perpetrators led Tecú to dedicate his life to the struggle for justice.

He currently heads up three community development organisations for survivors of the civil war and is a key witness in human rights and genocide cases.

The Human Rights First international selection committee that chose the 37-year-old activist noted his effectiveness in advancing human rights in Guatemala, the distinctiveness of his work, and the considerable risks he faces.

IPS caught up with Tecú before he headed out to New York to receive the prize.

Q: What does winning the Roger N. Baldwin Medal of Liberty mean to you? A: It gives a political boost to our work in fighting impunity and it also helps to keep alive the memory of the sorrowful history of genocide that the majority of the Maya people of Guatemala suffered.

Q: You suffered it in a very personal way. A: Río Negro was so remote that teachers didn’t even come there. And one day the news started going around that they were going to build a dam. That’s when the problems began.

They told us that if we didn’t want to leave, we would die, because all of our homes and land would be flooded. Then they accused us of being guerrillas, which served as a good justification to kill us.

On Feb. 13, 1982 the army and the civilian self-defence patrols called all of the men of Río Negro to a village called Xocop and none of the 75 who went came back. That’s where my father died.

A month later, they came back to finish off the orphans and widows of Pak’Oxom. They killed 107 children there, including my three brothers, and 70 women. My sister survived because she was giving birth that day.

Of a family of seven, only two of us were left alive.

I survived because one of the PAC members took me out of the group of women so I could work for him.

Q: When did your struggle for justice begin? A: During the armed conflict they killed thousands of children who didn’t even know why they were dying. That obligates us to demand justice. And I can’t allow the deaths of my parents and my brothers to go unpunished either.

The struggle began in May 1993, when we filed the legal action in court.

In June 1994 an arrest warrant was issued for the former military commanders, and the threats really surged. I considered pulling out of the lawsuit, but in 1996 I received 25,000 dollars as part of the Reebok Human Rights Foundation prize.

I saw it as a prize that came out of so much pain, tears and blood, and that thus should be invested in social work. That is how we founded the Fundación Nueva Esperanza (New Hope Foundation), which began to grant scholarships to youngsters so they could study.

With the prize money we also bought a lot where we set up the Asociación para el Desarrollo Integral de las Víctimas de la Violencia (Association for the Integral Development of Victims of the Violence).

Q: What happened to the Río Negro court case? A: The former PAC members were sentenced to death, while we’ve spent nearly nine years pursuing the members of the military. It looks like the state is protecting them.

If they’re former PAC members or indigenous people, they get a death sentence because that’s the only way the country’s international image can start to change, and so they can claim there is justice in Guatemala. That’s when we realised justice here is racist and discriminatory.

In our country, justice often moves only when it is shoved by international bodies.

Q: Do you mean that without international pressure, there is no justice? A: Yes, exactly. Proof of that is that the CIGIG (the United Nations-sponsored International Commission against Impunity in Guatemala) had to be set up.

Democracy and the rule of law have completely deteriorated. Since the peace accord was signed, there have been so many murders, and the judges have lost credibility.

In the conflict, we knew who was responsible for the killings and disappearances. Now they dress like gang members, but they’re not gang members; they’re the people who operated during the armed conflict.

Q: Why haven’t the changes that were hoped for after the peace agreement come about? A: They failed to strengthen the justice system. When the armed conflict ended, the justice system was like a child that is starting to stand up, but who no one dared to help start walking.